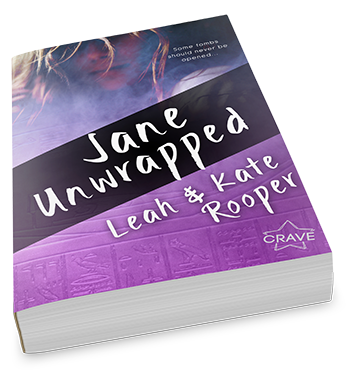 Some tombs should never be opened…

Fluorine uranium carbon potassium. Jane’s experiment really went wrong this time. After a fatal accident, teen scientist Jane becomes the first modern-day…mummy. Waking up in the Egyptian underworld without a heart certainly isn’t the best—especially when it means Anubis, god of embalming, has to devour her soul. Yuck. But when Jane meets the drop-dead gorgeous god, suddenly she’s thinking this might not be the worst thing to happen. And then she is pushed to do the impossible—just time-travel and kill King Tut. Well, every experiment has variables which can end in disaster… Jane just wishes she could decide whether she wants to strangle Anubis or kiss him.

Death by drowning and finding herself wandering in the equivalent of Egyptian purgatory, the Duat, was definitely NOT in Jane Ezrael’s rational, carefully constructed five-year plan. And if that weren’t bad enough, she’s told she’s heartless. Literally. And that means no moving on from purgatory, and even worse? If you’re heartless, chances are very, very good that’ll you’ll be hunted down and devoured by (the handsome and infuriating) Anubis. No overstaying your welcome in the Duat.

But when a banished god comes to her with a (slightly sketchy) scheme to get her a heart, King Tut’s to be precise, her logical brain figures it’s her best bet for an eternal outcome that doesn’t involve becoming a soul snack. Tut’s not going to need it anyway, right? So, aided by Anubis, she’s whisked off to ancient Egypt on an adventure to find a heart.

And that’s really what this book is about, the quest to find Jane’s metaphorical heart. Hers has so long been filled with her passion for science that her priorities have gotten a little skewed, and her death may just provide a little much needed perspective

Jane. I liked Jane’s rational and scientific approach to life, her general knowledge of the world and history.  I expected there to be a bit more fish-out-of-water culture shock on her part as she did go back in time a couple thousand years, but her intelligence and level-headedness under pressure explain that to some degree. Her journey towards finding her heart, experiencing life, finding love is compelling, and the complex moral issues that arise from Jane’s conscience coming into conflict with her hard logic are interesting.

Romance. As for romance, one relationship I really liked, though it is a bit instalovey at the beginning, and I wish there’d been more foundational development for it at the outset. However, once you move past the initial bit, their chemistry is great. The other relationship is awkward and kind of indefinable, which admittedly describes a lot of real life relationships, but I just wasn’t sure what to do with it. Is it a love triangle? Kinda, but no? But kinda? But no. See? Awkward.

World. I really liked how Leah and Kate developed the world. While is ancient Egypt, foreign, beautiful, mystical, and terrifying, it manages to also be relatable on a human level. Their descriptions were great and their research extensive, and this novel sent me frequently off to Wikipedia after my interested had been piqued by some odd historical fact.

Plot and pacing. I really enjoy the whole dying-to-finally-live premise. Though it drags in some spots, the book moved pretty quickly, the action and intrigue kept me flipping pages, and the climax was well done. I will be interested to know if there will be more adventures in the afterlife for Jane, because while it wraps up (ha!) nicely, there are little indicators that make me think this is not the end.

Overall. Egyptology, romance, and interesting, resourceful heroine pitted against a pantheon of unpredictable and devious gods make for a fun read. 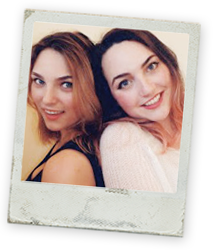 Leah and Kate Rooper are sisters from Victoria, British Columbia, Canada. Growing up beside the Pacific Ocean and inside a temperate rainforest fed their sense of adventure as children, and nourished a curiosity for strange and distant lands. They fed this curiosity with books—lots and lots of books. After experiencing the magic of Middle-earth, they began creating their own worlds. When they’re not writing, Leah and Kate spend their time blogging and vlogging about their travel adventures and their writing journey. You can visit them at: www.leahkatewrite.com

Thoughts of a Bored Girl, thoughtsofaboredgirl.weebly.com