After serving out a year of hard labor in the salt mines of Endovier for her crimes, 18-year-old assassin Celaena Sardothien is dragged before the Crown Prince. Prince Dorian offers her her freedom on one condition: she must act as his champion in a competition to find a new royal assassin. Her opponents are men-thieves and assassins and warriors from across the empire, each sponsored by a member of the king’s council. If she beats her opponents in a series of eliminations, she’ll serve the kingdom for three years and then be granted her freedom. Celaena finds her training sessions with the captain of the guard, Westfall, challenging and exhilirating. But she’s bored stiff by court life. Things get a little more interesting when the prince starts to show interest in her… but it’s the gruff Captain Westfall who seems to understand her best. Then one of the other contestants turns up dead… quickly followed by another. Can Celaena figure out who the killer is before she becomes a victim? As the young assassin investigates, her search leads her to discover a greater destiny than she could possibly have imagined. (Goodreads summary)

Celaena Sardothien, Adarlan’s Assassin – feared, fierce, lethal. Everyone in Erilea knows her name, a name synonymous with death. But then betrayed, caught, tried, convicted, Celaena is sentenced to a lifetime in the unforgiving salt mines of Endovier as punishment for her many crimes. In an ironic twist of fate, she’s offered the chance to compete to become the Champion of the very king who condemned her; in doing so, earning her freedom… and possibly becoming Erilea’s best hope against the dark forces that would seek to destroy it.

Celaena. Celaena is a character who could be considered rather… off-putting had I not read the prequel novellas that lead up to Throne of Glass. She’s irritatingly arrogant, projects an unwavering confidence, she’s overbearingly prideful, prickly, a bit of a know-it-all, she’s selfish, spoiled, abrasive, a bit of a snob, and of course, an extremely lethal assassin.

Right about now you’re probably saying, “And you like her… why?”

Because while she’s most certainly flawed, and possibly more than most protagonists, the four novellas prior give the reader a front row seat as to the circumstances that brought Celaena to the salt mines of Endovier, and just what made Celaena Sardothien, the Celaena Sardothien. The character development these four “episodes” provide is invaluable and engenders an empathy for this tough-as-nails girl assassin who’s endured so much and become so hardened in her very short life. Because although Celaena is all those things mentioned above, underneath the facade she’s also an intriguing mixture of insecurity, doubt, fear, sorrow. She’s a smart girl who’s learned very quickly that emotion can be exploited by one’s enemies and that the only person she can really count on is herself. Nothing in life is guaranteed, especially people. People leave, they die, they betray, they fail. Celaena is not a person who gives her trust, nor does she open her heart to others, easily. This is even true for the reader. While who Celaena is becomes apparent to the reader, there are certain things about her that remain a closely guarded secret. Celaena reveals about herself only what she wants to be known, though there are moments when her defenses are breached, giving the reader tantalizing clues about the mysteries of Celaena’s life.

So, coming into Throne of Glass knowing what I know about her, I loved Celaena. Because in addition to those other qualities she’s also infectiously passionate, she’s brave, perceptive, quick-witted with a tongue that’s as sharp as her sword, she has a talent for reading people and situations, and she has a soft spot for the mistreated and oppressed. She’s a perplexing tangle of curiously childlike and being wise beyond her years. She’s a girl, who at the beginning of this novel has endured shattering betrayal and excruciating heartbreak… which made me want to give her a hug, knowing full well that I might come out of the encounter with a bloody nose and broken fingers. And though she is a ruthless assassin, she does have a sense of honor, a code by which she acts, and her line of work does indeed cause her some moral conflict. She’s just a very well done, thoroughly complicated, slightly broken character, which if you’ve read enough of my reviews, you’ll know those are the ones I love the most.

Dorian & Chaol.The Crown Prince and his Captain of the Guard. A reader and a warrior. The best of friends. Both fascinated with the same girl. A very, very dangerous girl.

For Prince Dorian, selecting Celaena Sardothien as his Champion in the competition was a way to thumb his nose at his father’s authority while still adhering to his father’s wishes. His relationship with Celaena was never supposed to get personal, but her wit, passion and snark, so different from that of the simpering court ladies, intrigues him in ways he never expected.

Reserved, devoted to duty, honor and excellence, Captain Chaol Westfall’s personal opinion of his prince’s chosen Champion isn’t very high. She’s nothing but a convict, a murderer of countless people. She’s manipulative, dishonorable, not to be trusted, soulless and devoid of humanity… right? However, as Chaol trains and guards the young assassin for the competition, he discovers that his initial opinion of the notorious Celaena Sardothien, Adarlan’s Assassin, may have been hasty and unfair.

Yes. I’ll just put it out there… this is a love triangle. But the way it’s developed, it’s believable, and never feels overly melodramatic. Two best friends; two guys who are both very similar in values, and yet very different in personality; two guys, flawed but wonderful; two guys who both compliment Celaena well, but in different ways; Two guys like this falling for the same young woman for different reasons? I can totally see that happening. I loved the gradual change as both of them began to see Celaena as more than just a convicted criminal and as an actual person with a heart and a soul… and eventually, perhaps, as a friend. Knowing the state in which the novellas left her heart, I was a tad hesitant about the romance aspect of this book (Sam…<sniffle sob>), but it works and it’s done really well… to the point where it’s tearing me up a little because both guys are just so…sigh-inducingly wonderful.

World.  It’s obvious to me that the continent of Erilea has been something Sarah J. Maas has been developing for a very long time. From climates, to languages, to landmarks, to legends and local lore, it’s a very polished, beautiful and complete world that Celaena Sardothien resides in. Plus, this book got a few automatic points in its favor because it includes a gorgeously drawn and detailed map, which I put to very good use while reading.

Story.  There are so many things going on in this book, so many threads of things – both subtle and overt – that Sarah is weaving to create a bigger, broader picture. From the main storyline of the competition, to the mystery behind the murders of the Champions, to the unrest in the conquered lands of Erilea, to the abolition of magic, to the political maneuverings and machinations of the royal court, to Celaena’s personal mysteries, plus a few threads from the novellas that have not yet been addressed – there’s just a lot of story there to work with and Sarah does a fantastic job of keeping a handle on all of them and developing them simultaneously. It’s an exciting, fantastic plot, with a deliciously deliberate and well-planned complexity that kept my nose glued to the page.

Overall. Sarah J. Maas’s Throne of Glass is darkly enchanting, heartrendingly romantic, unfailingly action-packed and exciting – a definite page-turner and a sure-fire favorite. So read this. Read it now… or risk the wrath of Celaena Sardothien. <wink> 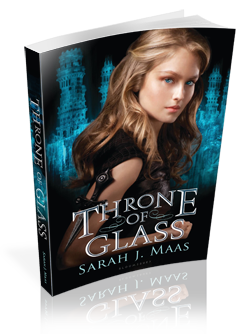 Source: Gift from my awesome hubs