Violet Eden is Grigori – part angel, part human. Her destiny is to protect humans from the vengence of exiled angels.

Knowing who to trust is key but, when Grigori reinforcements arrive, it becomes clear everyone is hiding something. Even Lincoln. The only thing Violet does know: Phoenix’s hold over her is more dangerous than ever.

The race to find the one thing that could tilt the balance of power brings them all to the sacred mountains of Jordan, where Violet’s power will be pushed to the extreme. And the ultimate betrayal exposed.  (Goodreads summary)

Violet. Entice finds Violet Eden still shaken from her experiences in the desert – the trials that turned her from being merely human to accepting her destiny as a Grigori, the part-angel protectors of humans and hunters of exiled angels. However, though she’s accepted what she is, it quickly becomes clear that Violet hasn’t wholeheartedly embraced the Grigori side of her nature yet, and she fears the lost part of herself that she was forced to kill in order to become what she was created to be. She’s trying to understand herself now that her whole world has been completely turned on its head. What part of herself did she lose? Her humanity? And who made her? Why is she different from other Grigori? For what purpose was she made?

Boys! Ugh… On top of this identity crisis she’s silently battling Vi must also deal with the tatters of her love life. Moving past her mistake with a guy who used and manipulated her, moving past her mistake that hurt the guy she truly loves but can never have. After Phoenix’s loyalties were revealed in the last book, Violet is angry and hurt from the deception, feeling foolish and naïve, and tries to focus on just being Lincoln’s platonic Grigori partner. Which is harder than she thought it’d be, especially since he seems more distant than ever, hanging out a ton with Griffin’s gorgeous partner Magda, and purposefully keeping Vi in the dark. Just when she thinks it can’t get any worse, Phoenix is back with his own agenda, and unfortunately Vi’s got to admit that they still have some kind of strange connection. Her relationships with both Phoenix and Lincoln were the big draw for me in the first book – both have very interesting dynamics. It’s kind of a love triangle, but… not. It’s terribly dramatic and all kinds of interesting.

Hello. You’re new. One of my favorite things about Entice is that Jessica introduces several new characters… the main ones being Salvatore, Zoe and Spence. Part of the contingent from the Academy in New York, these three are Violet’s peers – fellow trainees. All outfitted with their own cool angelic powers, these three have scene-stealing personalities that lend a lot of color to the story. From the quiet, sweet Salvatore who only speaks Italian, to the spitfire Zoe who’s perpetually annoyed with practically everyone, to the impetuous, fun-loving Spence whose biggest fear is being left out of a good fight. The characterization of these three is just done very well.

She’s got your back. Steph = I love her. Can she be my best friend? I’d love to see her take an even larger role later on in the series. She keeps Vi grounded. She knows Vi the best. She helps Vi put things into perspective. She dispenses advice or space as needed. She rocks.

The dealio. So why’s Phoenix back? Oh… only to get his hands on the legendary Scriptures. And if Phoenix gets his hands on the Scriptures, he’ll have a distinct advantage with which to carry on the exiles’ plan to wipe out all Grigori… and Violet and her friends aren’t about to let that happen.

The story was extremely fast-paced, but a bit weirdly paced at the same time – it lagged a little in the middle, felt a little muddled in spots, and went places I wasn’t expecting (i.e. – in a “Oh-ok-I-guess-this-is-happening-now” type of way). Despite that though, I still sped through the book, Entice definitely holding my interest.

Hmm. There were a few other minor things I just can’t shake, like once in awhile feeling a little emotionally distanced from Violet or events of the story. I think just more emotional development would’ve been nice, perhaps, because I felt in a couple instances that I just wasn’t feeling the depth of emotion I should be feeling. Maybe I have a heart of stone… but I get embarrassingly teary-eyed during Hallmark commercials, so probably not. Also, Griffin, Nyla & Rudy are slighly cardboard-ish parental stand-ins, and certain minor plot points feeling a tad contrived.

Overall. On to Emblaze! 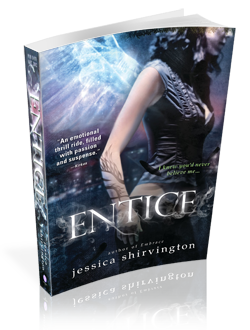 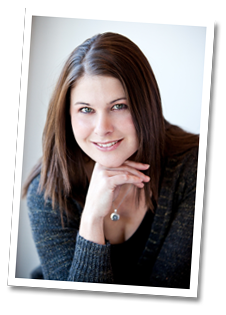 Jessica Shirvington is the author of THE VIOLET EDEN CHAPTERS also known as THE EMBRACE SERIES. An entrepreneur, author, and mother living in Sydney, Australia, Jessica is also a 2011 finalist for Cosmopolitan’s annual Fun, Fearless Female Award. She’s also one of the lucky few who met the love of her life at age seventeen: Matt Shirvington, a former Olympian and current sports broadcaster for FOXTEL and Sky News. Married for almost eleven years with two beautiful daughters, Sienna and Winter, Jessica knows her early age romance and its longevity has definitely contributed to how she tackles relationships in her YA novels. Previously, she founded a coffee distribution company, Stella Imports, in London, and before that was involved in the management of restaurants Fuel Bistro and MG Garage in Sydney. Jessica is now a full-time novelist and living her dream.