Ash, former prince of the Winter Court, gave up everything. His title, his home, even his vow of loyalty. All for a girl… and all for nothing.

Unless he can earn a soul.

To cold, emotionless faery prince Ash, love was a weakness for mortals and fools. His own love had died a horrible death, killing any gentler feelings the Winter prince might have had. Or so he thought.

Then Meghan Chase—a half human, half fey slip of a girl— smashed through his barricades, binding him to her irrevocably with his oath to be her knight. And when all of Faery nearly fell to the Iron fey, she severed their bond to save his life. Meghan is now the Iron Queen, ruler of a realm where no Winter or Summer fey can survive.

With the (unwelcome) company of his archrival, Summer Court prankster Puck, and the infuriating cait sith Grimalkin, Ash begins a journey he is bound to see through to its end— a quest to find a way to honor his solemn vow to stand by Meghan’s side.

To survive in the Iron realm, Ash must have a soul and a mortal body. But the tests he must face to earn these things are impossible. At least, no one has ever passed to tell the tale.

And then Ash learns something that changes everything. A truth that turns reality upside down, challenges his darkest beliefs and shows him that, sometimes, it takes more than courage to make the ultimate sacrifice. (Goodreads summary)

Though The Iron Knight was meant to bring further closure to the stories of Ash, Meghan and Puck and was definitely more close-ended than The Iron Daughter’s originally intended conclusion, I couldn’t help but feel almost more melancholy at the end of this one. Maybe that’s because of the way certain events that unfold in this story – the possible future that looms before them – or possibly it’s merely because Ash, Meghan’s and Puck’s adventures are more-or-less over and I’m mourning the fact that they will go on “living” without me.

So why did I love this book so much? Simply put, Ash. I love getting Ash’s fey perspective on his past, his relationships, his regrets, his fears, and his commitment to Meghan. He’s a rather introspective guy and The Iron Knight is extremely brutal for Ash as he comes to certain realizations about who he is, was and wants to become, as well as and the damaging consequences of actions long since past. This book doesn’t pull any punches emotionally.  It was raw and at times ugly, but ultimately, it made the book all the more beautiful. I love the growth that occurs in Ash throughout the series and how his love for Meghan, and hers for him, alters him irrevocably.

Though the romance through the entire series has been of an epic scale – and I just love the love story to pieces – the relationship between Puck and Ash has been just as compelling to read about, and at times more so. I love these two boys, and I love that they chose to put up with each other, each the other’s arch-rival, for better or for worse, in order to pursue Ash’s quest. I love that Puck doesn’t give up on Ash, and that Ash deep down misses his best friend… making me sigh multiple times and hope beyond hope that these two stubborn faeries would just kiss and make up… or the manly, bromanctic equivalent of whatever that would be. The emotional rollercoaster these two went on made me alternately happy and tearful… and sometimes both at the same time.

Overall, a gorgeous, gorgeous bittersweet conclusion. Julie Kagawa, thank you. You broke my heart to pieces time and again, but always made sure to mend it after a fashion. You enchanted me with your tales of monsters, quests and many deeds of derring-do. You gave me new friends and beautifully re-imagined old ones. And above all, you achieved what I didn’t consider possible and made me fall hopelessly in love with Faery. 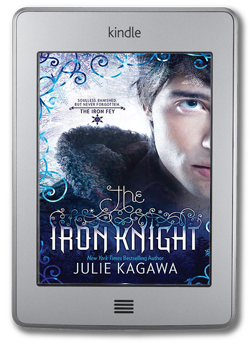