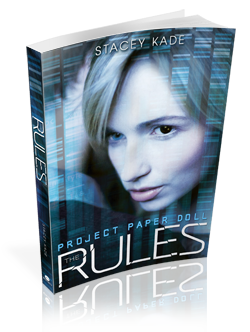 Five simple rules. Ariane Tucker has followed them since the night she escaped from the genetics lab where she was created, the result of combining human and extraterrestrial DNA. Ariane’s survival—and that of her adoptive father—depends on her ability to blend in among the full-blooded humans, to hide in plain sight from those who seek to recover their lost (and expensive) “project.”

Why do I want to read this book?  Two words…  Stacey Kade.  ‘Nuf said.

Through the Ever Night

A world-defying love is put to the ultimate test in the heart-stopping sequel to Veronica Rossi’s “masterpiece,” Under the Never Sky. (Examiner.com)

In this second book in her spellbinding Under the Never Sky trilogy, Veronica Rossi combines fantasy and dystopian elements to create a captivating love story as perilous as it is unforgettable.

Despite the obvious Tom Cruisiness of the cover, (I really love the continuity but do NOT like the model they picked for Perry) I am really looking forward to the next segment in Perry and Aria’s story.