Varen Nethers is trapped in a perilous dream world — a treacherous and desolate realm where the terrifying stories of Edgar Allan Poe come to life. Isobel Lanley, plagued by strange visions and haunted by the nightmares of Varen’s creation, is the only one who can save him.

Isobel knows that her only hope lies within a Baltimore cemetery. There, in the early morning hours of Edgar Allan Poe’s birthday, a mysterious stranger known as the “Poe Toaster” will make his annual homage at the legendary poet’s grave.

Only the Poe Tosater holds the key to the way between worlds. But even greater dangers lie ahead for Isobel. An ancient evil, draped in veils of white, is watching, challenging her for Varen’s affections. When Isobel finally finds Varen, he is no longer the quiet and brooding boy who once captivated her, but a dark force, powerful and malevolent.

For those who have not read Nevermore, this review will contain spoilers.

Let me tell you about this book!

I first read Nevermore back in Fall 2010, not long after it came out, and I fell head-over-heels. Nevermore entranced me in every possible way, and for days, weeks, afterward I’d find myself returning to it, re-reading parts of it, completely in love with every line of it. So to say that I’ve been looking forward to Enshadowed… well yeah, that’s a gross understatement. So when I finally got my grabby, fan-girlish fingers on this gorgeous book, I was beside myself with unrestrained, dork-filled happiness (just ask my husband who was mildly embarrassed for me… and possibly of me).

And was it everything I hoped it would be? YES. A thousand times, yes.

To be honest, with my favorite series, I try not to make too many predictions, try not to read into things too much… sometimes, frankly, I avoid even the blurbs to the subsequent books in a series. And why, you may ask? Because I don’t want to know. I don’t want to know anything until I’m able to find it out on the page. I want to begin the book with very little expectation, and to let the author sweep me up into the story – be carried along to wherever they wish to take me… and Kelly Creagh is a fabulous and trustworthy tour guide through the beautifully terrifying landscape of Isobel and Varen’s tragically romantic story.

After unknowingly trapping Varen in Lilith’s dreamworld the night of the Grim Facade, Isobel is heartbroken but resolved to keep her promise that she will return for him and save him. And she has a plan: Reynolds. Her mysterious friend and foe – the person who betrayed her trust that fateful night, the man who vowed that she would never see him again – who, as luck would have it, happens to be the infamous Poe Toaster. On January 19th, from midnight to 6 a.m. at Poe’s original grave site in Baltimore, Isobel knows exactly where she’ll be able to find Reynolds… and her door back into that nightmarish realm that’s imprisoned half her soul.

However, getting to Baltimore may prove more difficult than Isobel anticipated. Because she violated their trust so completely on Halloween night, her parents have Isobel on full lockdown and no longer approve of her friendship with Gwen – the one person in the world who understands, even if only a little, the reality of what happened that night. But even if Isobel makes it to Baltimore, makes it back to Varen, what will she find? Will there be anything left worth saving?

Will there?! WILL THERE?! Sorry, just got caught up a little in the moment. <quietly composes myself>

This book finds Isobel much changed. She’s no longer the bouncy, happy, oblivious cheerleader. She’s subdued, broken, in a kind of mourning – a shell of her former self but also a newer, stronger Isobel that’s risen out of the ashes of her grief. I love the downward spiral her life takes post-Varen, and Kelly does a fantastic job of communicating Isobel’s sadness and the unfairness of her situation. Izzy’s trapped between a rock and a hard place – unwilling to give up on Varen, but fulfilling her promise means further damaging her already tenuous relationship with her parents. She can’t go to her mom and dad and explain what’s really going on, because they’d have her on a therapist’s couch faster than you can say “Poe.” So she’s forced to subterfuge and secrecy, single-mindedly fixated on saving Varen. Call me cruel, but I like this side of Isobel – I love the strength of her devotion to Varen. I love how shattered she is, yet how functional. She doesn’t allow her sadness to consume her, rather it drives her. I wouldn’t call it necessarily healthy, as her grief makes her a bit reckless, but I also like the complications and consequences that arise as a result of her desperation. Isobel goes to some pretty dark places, both literally and figuratively as her separation from Varen drives her to save him – no matter the cost.

Let me bunny trail here a bit just to quickly say how much I absolutely love that Isobel’s parents, and specifically her dad, are a major part of this book. Absent parents they are not. Convenient road blocks to only generate conflict they are not. They’re real, live, honest-to-goodness parents who are involved, concerned and doing their best to actually parent their kids. It’s a rarity in YA , and so refreshing to see that in this genre.

So, back on track, now’s about the time I would normally talk about Varen, and what’s going on with him. But that’d spoil things, so I’m not going to do that. Though I will address the concerns I’ve heard about how he’s not in much of the book. That’s true. Physically, Varen is absent through a lot of the book; however, Kelly does an excellent job of keeping him ever at the fore of the story , reminding the reader just what Isobel has lost and what’s become her all-consuming motivation. Though I missed Varen immensely, I didn’t feel like Enshadowed lacked anything vital. While being about Varen, this story is Isobel’s – showcasing her growth as a character, and her evolution as a person since the moment Varen found his way into her heart and turned her world upside down. And it’s fantastic. Plus, Varen’s absence helps weave some incredible tension, both plot-based and emotional, that really moves the story along and communicates to the reader the depth of Isobel’s anguish.

So not talking about Varen, but I will talk about Pinfeathers. Pinfeathers is one of those characters that thoroughly creeped me out in Nevermore, and I sort of wrote him off as nothing but mean and scary. I mean come on, dude has a hole in his cheek, sharp, red teeth, a strange and disturbing obsession with our heroine… not to mention that’s he’s terribly malicious and empowered by fear. He’s the embodiment of nightmares. But, we get to see much more of Pinfeathers in Enshadowed, and as I’ve learned time and again, rarely is anything as simple as it first seems. And so it is also true with Pinfeathers.

The tone of this second book is very dark, almost bleak, and very creepy, but also has moments of wonderful hilarity. Because this book is more Isobel-centric, we get to see a lot more of Danny & Gwen. I had forgotten how funny both of these characters are in their own right – Danny the perceptive, opportunistic, capitalistic little brother who lives and breathes for his gaming console, and Gwen the tell-it-like-it-is, snarky, slightly devious best friend who doesn’t have much of a social filter. So though it’s a heavy book, and it really is, Kelly does a fantastic job of breaking up the darkness with moments of humor, balancing both extremes expertly.

Also woven expertly? The world. There are those who can build a well-done world, and there are those who can bring a world into actual being, where every facet of the world is easily imagined, every detail vivid in the mind’s eye. Kelly is most certainly the latter. Be it Nobit’s Nook or the surrealistic dreamworld, Kelly describes her settings and locations with a brilliant clarity, without drowning her readers in excessive, weighty description. It’s gorgeous, it’s terrifying, it’s alarming and it’s grand.

Overall, with an emotionally compelling heroine, a romance that grips your heart, a fantastic supporting cast of characters, a gorgeous and frightening dreamworld, a rich mythology that sucks the reader right in all wrapped up in a beautiful homage to Poe, Enshadowed, quite simply, is an amazing read that’s found a permanent home on my favorites shelf right alongside Nevermore. 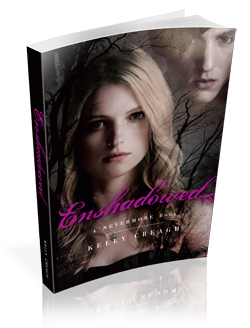