Gemma seems to have it all—she’s carefree, pretty, and falling in love with Alex, the boy next door. He’s always been just a friend, but this summer they’ve taken their relationship to the next level, and now there’s no going back. Then one night, Gemma’s ordinary life changes forever. She’s taking a late night swim under the stars when she finds Penn, Lexi and Thea partying on the cove. They invite her to join them, and the next morning she wakes up on the beach feeling groggy and sick, knowing something is different.

Suddenly Gemma is stronger, faster, and more beautiful than ever. But her new powers come with a terrifying price. And as she uncovers the truth, she’s is forced to choose between staying with those she loves—or entering a new world brimming with dark hungers and unimaginable secrets. (Goodreads summary)

When I picked up Wake, I have to admit that from the blurb I expected the story to be Gemma’s, for her to be the narrator/main protagonist of this story; however, in my opinion, the blurb is somewhat misleading. It’s not Gemma’s story. Not really. It’s about Gemma and the things that happen to her (like Twin Peaks is all about what happens to Laura Palmer) but in my opinion, the main character of this particular tale is actually Harper, Gemma’s older sister.

Being familiar with most of Amanda’s previous books, I was surprised to find how wooden a character Gemma is. She is a bit stand-offish and lacks any real depth. I could never establish a bond with her, even though half the story is from her point of view. Gemma endures some pretty crazy things in Wake and even begins a fledgling romance with her longtime friend Alex, but for some reason I just couldn’t bring myself to be more than mildly interested in her or the romance. (Me not interested in a romance? Unheard of. I know.) I found myself just trying to get on through Gemma’s sections so I could get back to Harper’s part of the story. For me, Gemma holds no spark, no depth, nothing that makes her endearing or special – she is just kinda… there… providing a reason for the existence of the plot.

Harper is moderately better. I found her to be much more interesting than her younger sister. Uptight and über-responsible, Harper has endeavored for years to fill the maternal void left in their mother’s absence.  And in doing so, she has increasingly alienated Gemma. Harper wars between wanting to connect with her sister as a sister, but can’t quite let go of that mothering concern that smothers Gemma. I found this complicated dynamic between the sisters to be particularly interesting. Harper’s tough, more abrasive, harder to love, which ironically made me like her more. She’s so worried about everyone else and being strong for her family, that I was pulling for her to find some happiness for herself.

As far as the story goes, I had a few more issues…

Showing vs. telling. The biggest example of this is with Penn, Lexi & Thea. The reader is told many times that Penn & Co. are dangerous and bad news, but I never felt that the reader is given a valid, credible reason to support this. Sure, the girls definitely have a predatory, “Mean Girls” vibe going on, but without proof, I’d be more inclined to think they’d be more of a danger to destroying a frenemy’s social life than an actual, physical threat.

Pacing, plot and oomph. Wake is just over 300 pages long, but it’s one of those books, where I’m reading and reading and reading… and upon reflection, it feels like not much has happened in the story. Do you know what I mean? Not that it was boring, there was enough in there to keep me going (re: possible romance between Harper & sexy boat boy Daniel).  I actually zipped through this book rather quickly, but it was missing something – that extra oomph. As with Gemma’s character development, the story just lacked a sense of depth. From the characters, to the plot, to the world, to the mythology, and even the relationships (with the exception of Harper & Daniel) Wake came off as a bit surfacey and generic.

So what did I like about Wake? Well, the coastal town setting, the scenes with the girls and their mom, Daniel (← Swoon. Definitely wish we’d seen more of him), Harper’s hilarious friend Marcy, the basic mythology behind the story (I just wish there’d been a little more to it, and that it didn’t feel so… tagged on.). These are all elements in Wake that I enjoyed.

Overall, though parts of this book are definitely interesting, I keep coming back to my issues with Gemma’s character and the general lack of depth and development. Wake is an “okay” book, but out of all Amanda’s novels, it’s not her best. At this point I’m undecided if I’ll continue on in the Watersong series. 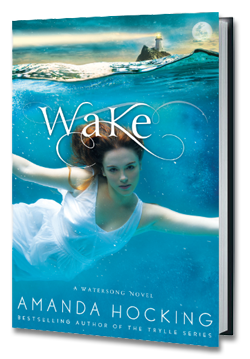