“One foot in front of the other.”

Seventeen year old Virginia Mae Nolyn has the perfect life – good grades, loving family, and an engagement to her handsome, All-American boyfriend. However, weeks before her wedding, Ginny realizes that the future that’s been laid out before her is not the one she wants. She feels as though her life has been managed to the last detail by everyone but her.  In a single moment of magical awakening, the road beckons her to leave her empty future behind and urges her feet toward Winnemucca and the mother she’s never known.  Ginny sets out on an enchanted journey filled with Johnny Cash fairy-godfathers, magical semis, mariachis, sequins, música, boys with tattoos, and narrow escapes from the law. Will she make it to Winnemucca to find answers to the mysteries of her past, discover who she is and determine what her future holds?

I have to admit, it took me a little while to grow accustomed to Elliott’s uniquely descriptive and thought-provoking writing style, as it is so different from the books I normally read. But the further I dove into Winnemucca the more charming I found it. Using one-of-a-kind descriptors to create a very poetic view of the world, Elliott gives Ginny a voice that’s powerful, musical and all her own.

The book is largely introspective as Ginny, our first person narrator and tour guide, takes us on a journey through her doubts, her epiphanies, her discovery of the enchanted, and even the mundane. As this book is about a realization of self, Ginny is a bit lost, wandering and at times floundering, throughout the book. Elliot does an admirable job of demonstrating this not only through Ginny’s internal dialogue, but also through her writing style. The prose while incredibly descriptive at times is a bit vague, allows one to read-between-the-lines, rambles a bit, and yet is interspersed with moments of incredible clarity and profundity. I don’t think this is indicative of anything wanting in the writing style, but as I stated previously, a beautiful synchronization with Ginny’s mentality throughout the story.  There were so many poignant quotes and moments, so many truisms sprinkled throughout this book that gave me pause, made me think and appreciate Elliott’s insights into life and human behavior.

Winnemucca took me on many twists and turns, kept me on my toes as Ginny journeyed toward her answers, and never quite went where I was expecting. But aren’t the best road trips created by embracing the unexpected and the unknown? This book is a wonderful reminder that it’s not only about the destination, but rather the journey — the discoveries, tragedies, victories, and the magic that happens along the road to our own Winnemuccas — that makes life worthwhile. 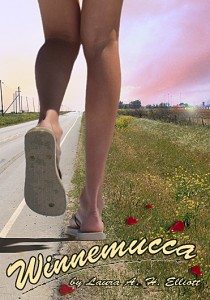