Josephine Angelini’s compelling saga becomes ever more intricate and spellbinding as an unforgettable love triangle emerges and the eternal cycle of revenge intensifies. Eagerly awaited, this sequel to the internationally bestselling “Starcrossed” delivers a gritty, action-packed love story that exceeds all expectations.

Disclaimer:  If you have not read Starcrossed you may want to skip this review as it has the potential to be spoilery.  I will try to refrain from too much spoilerage though.  To check out my review of Starcrossed click here.

I loved Starcrossed.  It was one of my favorite reads from last year.  Add to that the fact that I got to meet the oh-so-sweet and wonderful Josie Angelini at RT this spring and you have the makings of a highly anticipated sequel.  anyone who knows me, knows coffee’s a big deal, it’s like the ultimate friend-date thing.  But alas, I digress>  I had high hopes and expectations for Dreamless but I’ll admit most sequels have left me underwhelmed as of late.  They tend to be more of a bunch of words thrown together to link book 1 with book 3 with most of the drama coming from the love triangle that magically appears in book 2 rather than a continuation of the story begun in book 1.  However, Dreamless is something entirely different which completely blew my mind!

One of the things I love most about this series ss the absolutely breath-taking world, Angelini’s built.  It’s full and beautiful and easy to fall into.  Even though the stories are old and the mythology is prolific, she makes it feel new and completely unique.  I loved that while I was reading I had to keep my Wikipedia app open on my phone so I could try to keep up with the beautiful web she wove (Note: this is not necessary, I just really love this type of research and figuring things out).  There are so many twists and turns, unexpected new characters and new character arcs for old characters that you cannot help but be swept up in the drama.  It’s exsquisite.

Breath-taking worlds are great but what about characters?  Sigh, there are too many awesome characters to go into depth on all of them but let’s just say, characters I loved before I love even more because we get to really see what they are made of in some seriously terrific scenes.  Secondary characters get even more thorough development and the new characters?  Wow.  Angelini has a way of making gods seem like real characters with real personalities while still remaining gods.  It’s amazing.  Can I just add that I hate Daphne…like I seriously hate her and want to kick her Scion butt.  I love Claire, she’s full of spit-fire and awesome.   I think my favorite secondary character is Noel though.  She’s a completely normal, non-magically human who keeps up, exists, and through the sheer strenght of her will, survives the crazy that is life with Scions.  It’s amazing.

Let’s talk about the main characters for a second though.  Helen.  Sweet, beautiful, courageous, stubborn Helen.  I love this girl.  She is definitely not one to shy away from responsibility or duty.  She looks for solutions and seeks answers no matter what it means for her personally.  She doesn’t wait around to be rescued.  In fact she’d rather go it alone if it keeps everyone she loves safe.  Since she and Lucas are “cousins,” they can’t be together which is thoroughly frustrating for both of them, yet they can’t stay away from each other which drives Lucas to, ahem, some rather drastic choices.  It’s possible these choices just might make him more swoonworthy however.   Because of this sad separation, there is a new boy introduced.

Mr. Orion, welcome to our lives.    I’m typically not a fan of the love triangle.  Rarely is it done well and worth the heartache.  It’s become a cliché in YA and that irritates me to no end.  However, in this case it works.  I mean, we’re talking about a story where “Helen of Troy” is on repeat for thousands of years to varying degrees of severity.  It’s the quintessential love triangle!  There must be a love triangle and Angelini does it beautifully.  I won’t go into all the details because I want to leave you to your own conclusions but I’ll say this, I love Orion’s character but I’m sticking with Team Lucas for now.  I’ve just got a good feeling about that one and I’m a sucker for starcrossed love stories.

Dreamless is filled with action-packed drama and an extremely well-paced plot.  It was deliciously well-thought out and original while adhering to ancient mythology.  Angelini is a genius.  She answers one question by giving you three more, leaving you utterly and completely consumed by her story and desperate to know what happens next.

In short, Dreamless is a perfect sequel with wonderful twists and turns.  Beyond that, it is an incredible continuation of the Starcrossed Trilogy.  It was better than the first.  I totally and completely fell in love, all over again, with the world Angelini’s created.  I simply cannot wait for Goddess to arrive in May 2013! 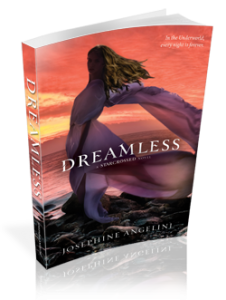