The Lynburn family has owned the spectacular and sinister manor that overlooks Sorry-in-the-Vale for centuries. The mysterious twin sisters who abandoned their ancestral home a generation ago are back, along with their teenage sons, Jared and Ash, one of whom is eerily familiar to Kami. Kami is not one to shy away from the unknown—in fact, she’s determined to find answers for all the questions Sorry-in-the-Vale is suddenly posing. Who is responsible for the bloody deeds in the depths of the woods? What is her own mother hiding? And now that her imaginary friend has become a real boy, does she still love him? Does she hate him? Can she trust him? (Goodreads summary)

“Every town in England has a story. One day I’m going to find out Sorry-in-the-Vale’s.”

Intrepid high school reporter Kami Glass knows her hometown is full of weird, and not just the usual small-town brand of quirkiness. Having had an imaginary friend named Jared who has lived in her head for as long as she can remember, Kami is no stranger to the strange and bizarre. But Sorry-in-the-Vale is weird. It’s in the way one can feel the abandoned manor house that enshadows the town. It’s in the strange way townsfolk invoke the village founders’ family name. It’s in the stony silence that meets her questions about that same family, the Lynburns. And it’s most definitely in the way that now, after a 17-year long absence, the Lynburn family is finally returning to Sorry-in-the-Vale… along with a 17 year-old son named Jared.

As gothic mysteries go, Unspoken is… well, fun. Fun? A gothic mystery fun? Yes, Dear Reader, it turns out the two concepts are not mutually exclusive. While there’s always that vaguely unsettled feeling that looms over the novel – the little oddities that jar you and remind you that something is not quite right here – Sarah Rees Brennan has imbued the players in her mystery with an abundance of wit and cleverness, and they in turn provide wonderfully witty and clever narration and banter. From the overtly hilarious, to the slightly ridiculous, to those wonderfully subtle tongue-in-cheek moments, the dialogue and descriptions are candid, funny, and spot-on.

But it’s not just fun and games. It is a gothic mystery after all. As hilarious as Unspoken can be, Sarah Rees Brennan can seamlessly turn the tone of the story completely around creating an atmosphere that is either serious and disconcerting or emotionally-charged and poignant. The mystery builds well throughout the novel, following Kami and her “team” as they work to uncover the skeletons in the Lynburns’ collective closets and the secrets of Sorry-in-the-Vale. Though I had sneaking suspicions about what was really going on and whodunnit, I love that I was mostly kept guessing throughout the book until the big “Aha!” moments.

While the novel follows the perspectives of both Kami and Jared, the primary point of view throughout is Kami’s. Kami is like Lois Lane… but with more common sense. She’s sharp, intelligent, capable, dogged, stubborn. She refuses to give up – there’s always an option or a workaround, and she doesn’t allow things to stand in her way. Kami has an infectiously optimistic “I’m gonna roll with it, or I’m going to make it roll with me” type of personality. As I said before, she’s a bit accustomed to weirdness from living her whole life in Sorry-in-the-Vale and also from having a friend who lives inside her head. She’s far from normal, but she recognizes her abnormalities and has created her own version of normal, inventing ways to integrate her strangeness into her everyday life. With everything that’s been said about Kami so far, one might imagine this strong girl reporter to be a bit on the jaded side. However, while she’s snarky and tough, Kami has a huge heart.  She’s passionate about the people she cares for, not just her search for the truth, and she comes with her own set of doubts and fears which make her a very endearing character, and a very honest character as well.

Jared, on the other hand… well, he’s a bit darker with a few more secrets.

Sarah Rees Brennan has created a swoon-worthy (not to mention conflicting) gothic hero in Jared, as he both captivated me and unsettled me at the same time. While he reels you in with his charm, his tortured, tough guy vibe, and his emotional vulnerability, there’s an underlying, yet prevalent, streak of darkness inside him that threatens to consume him. He’s a bit volatile, a risk-taker, prone to jealousy, and slightly obsessive. In short, he’s trouble with a capital “T.” But he’s also fiercely protective, quick-witted, funny, and extremely sympathetic. Luckily for Jared, we get to see him as Kami sees him, this boy she’s always known, yet also a boy whom she’s discovering she doesn’t really know at all. He rides the line between sweet and disturbing throughout the novel, which made me like him… and then question if I really should. His character is wonderfully complex, so conflicting, and because of that he’s possibly one of the most interesting book boys I’ve read yet. What can I say? I prefer the slightly broken, complicated ones.

While the secrets of the Lynburn family are compelling and the mystery is well-developed, the lynchpin of Unspoken is unquestionably the complexity of the relationship between Kami & Jared. There’s an intimacy they’ve always shared because of their connection, even though they weren’t aware the other was necessarily real. They know each other, have always been there for one another, they share a deep history – they are almost two halves of one whole. It all sounds terribly romantic on the surface, and to some extent it is. However, once they each discover the other person is an actual living, breathing person, it’s a whole different ballgame. As relieving as it would be to find out that you do not in fact have a multiple personality disorder, it’s one thing to share secrets, fears and embarrassing moments with the voice in your head. It’s another thing entirely to find out that you’ve actually been sharing those things with another person who’s now living in your community, going to your school, and sharing your lunch table. It would be a curse to always have someone sharing your headspace, to wonder about your individuality and question the validity of your feelings – to never be truly alone. And that’s before taking into account any kind of possible romantic attraction. Talk about complicated. To her credit, Brennan does a truly wonderful job of exploring this unrealistic situation in a very real and frank way – presenting the pros and cons, the day-to-day realities, of being psychically connected to another human being and all that would entail.

Overall, oh my, yes! Yes, yes, and more yes. Sophisticated, complex, dark, smart, funny, with off-the-charts amazing character and relationship development, a moderate dash of the weird and strange, and an oh-so-conflicting-it’s-twisting-up-my-heart romance, Unspoken is a wonderfully compelling read. 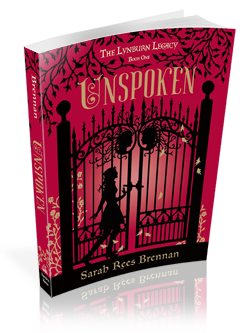