In the Second Book of Lharmell, Zeraphina and Rodden must travel across the sea to find the elusive ingredients that will help them to win the coming battle against the Lharmellin – but shadows from Rodden’s dark past may come back to haunt him. And while she learns to harness her new abilities, Zeraphina still fights the hunger that makes her crave the north – not to mention avoiding her mother, who wants to see her wayward daughter married to a prince at all costs. (Goodreads summary)

***If you’ve not read Blood Song by Rhiannon Hart, there be spoilers ahead. Argh!

Such was my reaction upon finishing Blood Storm at 3:30am one morning not long ago. My sleeping husband snuffled indignantly at my outburst as he rolled over in bed beside me, reminding me that “Oh right, it is an ungodly hour of the morning, so I might want to keep my screaming to a minimum.”

So instead, I silently vented my disbelief at my bedroom ceiling (who wasn’t empathic at all, I might add. The nerve.). Anyway, there I was, gesticulating wildly, and after about 3 minutes of that… I felt better.

This book ate at my heart little-by-little, page-by-page and I just loved, loved, loved every, single second of it.

When we last saw Zeraphina, she had killed the Lharmellin ruler and she & Rodden had made it safely back to Pergamia where she was determined to stay on for a bit, despite her mother’s desire for her to come home to Amentia. Though the Lharmellin leader is dead, Rodden & Zeraphina’s work is far from over, and it won’t be until they can figure out a way to rid Brivora of the Harmings and Lharmellins. There’s only one effective way of killing the creatures: yelbar. A metal alloy, that’s all but useless to humans but absolutely lethal to those with Lharmellin blood. But Pergamia’s supply has all but dwindled sending Rodden and Zeraphina on a dangerous quest across continents to acquire more.

Zeraphina. Her experiences in the North have matured her and given her purpose. It’s no longer just about learning to live with her Lharmellin blood, but rather it’s become about ensuring a future where mankind is no longer threatened by the Lharmellins or their Harming servants. Zeraphina, of course, is still the Zeraphina I fell in love with in Blood Song. Plucky, tenacious, independent, outspoken, intelligent and courageous – it’s not that Zeraphina doesn’t feel afraid when considering going up against the monsters of the North, it’s just that the potential price for her inaction frightens her more. I just love Zeraphina’s spirit, her quick quips and comebacks, her behavior that can be shockingly unprincess-like. She may have been raised a princess but Zeraphina’s become a rather capable fighter, she’s not afraid to get her hands dirty, and she can slum it with the best of them. She abhors the thought of a loveless, political marriage that her mother’s determined to make for her and longs to be more useful than just a means of providing another Brivoran royal heir. And perhaps it is ironic… but for however much she and her mother don’t get along, Zeraphina actually is a lot like Queen Renata in her steely resolve and regal no-nonsense attitude. It’s just that unlike her mother, Zeraphina doesn’t have her head buried in the sand. She sees the world for what it is and wants to change it.

Rodden. In Blood Song, Rodden was formidable, imposing, and played a bit to the antagonistic side of things. But by the end of that book, the reader was given a pretty clear-cut view of his character (i.e. as in, the values by which he lives) even if his past remained much of a mystery. No longer such a mystery as he was in Blood Song, we see a lot more of Rodden in this book. He becomes more of a tantalizing flesh & blood person, rather than a tantalizing, handsome enigma. For instance, fun fact about Rodden: he gets violently seasick, which is an endless source of amusement. The almighty Rodden Lothskorn laid low by a bobbing boat. But we also learn that Rodden’s a tortured soul, forever running from a past he can never quite escape. He’s honorable, deadly, fierce, insightful, extremely knowledgeable, and surprisingly sweet. I love that he has high expectations of Zeraphina and that he treats her as an equal. He doesn’t coddle her, doesn’t mince words, seems to live to antagonize her, but it’s also clear that he cares for her very much. Before Zeraphina, Rodden’s existence had been a lonely one, but in her Rodden finds hope, a kindred spirit, and possibly absolution.

Zeraphina & Rodden. Theirs is the kind of romance that shines because of it’s subtleties – it requires a bit of reading between the lines, picking up all the things they won’t admit to each other, or can’t say. Zeraphina and Rodden have always been a bit of a tempestuous pair, but it’s tamed slightly since they’ve returned from Lharmell. They’ve developed a more comfortable rapport with each other. Oh, they still bicker like cats and dogs, but it’s more familiar and doesn’t hold the same biting, malicious edge. There’s a growing trust between them, and a camaraderie because of their shared experiences and natures. One of the reasons I love this book so much is that Zeraphina & Rodden get to spend almost every scene together – so much wonderful interaction between them – as they journey to Verapine and back again. It’s a quiet, but powerful romance with lots of lovely tension.

Story. So yes, Zeraphina and Rodden go off adventuring in this novel. Yes, just the two of them. No, no chaperone. Yes, I know! <fangirl squeal> This is a direction I often find myself hoping novels will take, but rarely do they ever venture down Hero-&-Heroine-Only Lane. And why? Because I suppose there are a lot of cliches and romantic pitfalls that can occur when you don’t have buffers and barriers between your two romantic leads. I get it. And you know what I mean. Exhibit A: The sun is going down, Hero and Heroine must find a place to stay for the night. Our options are:

Scenario #1: There’s only enough money for one motel, hotel, tavern room. Guess what? There also happens to only be one bed. Hero offers to stay on floor, Heroine feels bad. Guess what happens… no really, guess.

Scenario #2: “Oh! Your sleeping bag somehow conveniently disappeared in an event that was fraught with danger and much mortal peril? Well, please share mine. And you’re also soaked to the bone AND lost your only other change of clothes?! Well, then the only solution is to share my sleeping bag wearing only our delicates.”

Yeah. You know what I’m talking about.

Guess what? This story doesn’t do that. It doesn’t conveniently throw Zeraphina and Rodden together in situations that must make them release the romantic tension in incredibly cliché ways. And this is to the point where it’s almost frustrating. There are so many opportunities where this novel could’ve taken the “wide road,” but it doesn’t. Somehow Rhiannon Hart has created a fresh journey/adventure story featuring her two main characters – who happen to spark romantic tension like a live wire — without caving to conventional methods of building or relieving that tension. It is refreshing. It is awesome. It is oh-so-frustrating. But it makes it that much better. So while at times I just wanted to knock their heads together so their lips might finally meet (Kiss! KISS!), I thought the way she handled the circumstances of Zeraphina & Rodden traveling together really well done.

Once again we see this world and its players through the eyes of Zeraphina – her narration wonderfully wry and subtly humorous. Which is always the best kind of storytelling, one shouldn’t take themselves or their story too seriously, after all. Although, there are many, many serious things that do occur in this story. Things that took me off-guard and shocked me. Things that I both liked and didn’t, but they are ultimately the things that made Blood Storm so excellent. I’m absolutely dying for the third book; I started craving it the nanosecond I read the very last word of this novel. There are things I must know, theories I must have confirmed or denied, and it’s going to be a very, very long year until I can receive that resolution.

Overall. With gorgeously lyrical prose, a wonderfully dry sense of humor, a rich and alluring landscape, refreshing originality, and an achingly beautiful romance, Blood Storm reminded me of just why I fell in love with Zeraphina & Rodden’s story in the first place… and then made me fall all over again. 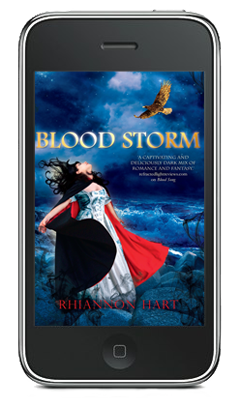 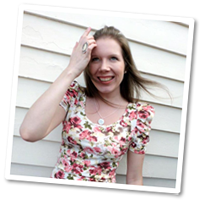 Rhiannon Hart remembers writing before she could read, puzzling over the strange squiggles in Jeremiah and the Dark Woods by Janet and Alan Ahlberg and putting her own words in their places. Her first love was Jareth the Goblin King at the tender age of eight. She wrote fan fiction in high school but she’d never admit to it out loud, so don’t ask. When she’s not reading or writing she is belly dancing, chasing after other people’s cats, or putting the pedal to the floor at her sewing machine. She grew up in north-western Australia and currently resides in Melbourne, where she works in marketing. Rhiannon has been published in the Australian Book Review, Magpies and Viewpoint and blogs athttp://rhiannon-hart.blogspot.com/.

Not from Australia?  Readers who aren’t Down Under can try getting Blood Storm here (currently out of stock, but you can sign up to be notified once it’s available):

SEPTEMBER 24 The Rest is Still Unwritten