Betrayed by the guy who supposedly loved her, Violet deals with her anger and hurt by teaming up with her archrival Ryn to help him find his missing sister. Hanging out with Ryn isn’t high on Vi’s list of things to do, but she kind of owes him after he inconveniently saved her life recently. As the two of them struggle to put their differences aside, they find themselves drawn into a plot much greater than a single missing child. A plot with Violet herself at the center. (Goodreads summary)

*** For those of you who have not read the previous three novelettes – Guardian, Labyrinth, and Traitor – this review will contain some spoilers. So just be aware…

After her now ex-boyfriend Nate betrays her to her enemies, Violet barely escapes the confrontation with her life. Heartbroken, gravely injured and beyond saving herself, Violet finds rescue coming from the unlikeliest of persons – Ryn. However, as can be expected, help comes with a price… and a whole lot of snarky comments.  But when Ryn’s little sister is kidnapped, Vi becomes his last hope of finding Calla. So he calls in the favor Vi owes him. Loathing the idea of working together with the guy who’s made it his mission to make her life hell, but also knowing she’s indebted to him, she agrees.

For as long as the reader has known them, fellow guardian trainees Violet and Ryn have been at each others’ throats. The exact reason is unknown. But reading between the lines it’s clear that whatever the problem is, it’s rooted more deeply than simply being the best in their guardian class. I’ve been wondering and theorizing as to what that might be, but in Masquerade, we finally get some insight as to why these two hate each other so vehemently and the truth behind their history with one another.

The Ryn we’ve seen to this point is mocking, calculating, and at times cruel. He’s without a doubt got that dark, sexy, dangerous thing going on, but his attitude toward Violet overshadows all of that. He enjoys getting under Violet’s skin, enjoys getting the better of her, enjoys seeing her squirm… and not in an adorable, pulling-on-her-pigtails-because-he-likes-her kind of way, but in more of a malicious sort of way. Ryn’s been a Grade-A jerk and even an antagonist in the previous stories. Like I said, I got the vibe that his intense dislike of her is motivated by something other than mere academic rivalry.

Now that I’ve told you all that, would you be surprised to find out that I absolutely love his character?

In Masquerade, Rachel Morgan allows us a somewhat different view of Ryn  – the Ryn behind the snide comments and insults. This Ryn loves his little sister so desperately and will do anything within his power to save her. There’s such a large disconnect between Violet’s tormentor/archrival and Calla’s fiercely protective big brother. But as Vi and Ryn work together to bring Calla home, Rachel begins pulling all the pieces together to finally give us the larger picture of which Ryn is the real Ryn.  Or as is more often the case, that it’s far more complicated than that.

The dynamic between Ryn and Vi is what made this particular book so enjoyable to me. They hate each other, but he saved her life and she owes him, and now they must work together. No matter how much they find each other disagreeable, they can agree on the fact that his sister’s in trouble and needs saving. I love how Vi goes toe to toe with Ryn. I love how ruffled Ryn makes Vi. I like how brutally honest they are with each other as they get to the heart of problem between them. Violet plays it so close to the vest with her emotions so often, and though we, the reader, get to see exactly what she’s thinking, she’s got a well-practiced poker face with most other people. And that’s one of the reasons I like Ryn: more than any interaction Violet’s had so far with all the people we’ve been introduced to in her life, the conversations and… possible altercations… with Ryn feel the most genuine. She gives it to him straight and he dishes it right back.

Speaking of Violet, if anyone deserves to curl up in a ball in front of the TV for a week watching Lifetime and existing on nothing but Rocky Road… it’s Violet. A series of weird events since she met Nate, Vi’s life has been turned completely upside down. And now in the face of Nate’s betrayal and Ryn’s extremely unexpected bid for help, it’s only gotten more strange and a great deal more painful. However, Violet is a strong person, she’s functional despite her heartbreak. Not that she doesn’t feel the loss and anger deeply… she does. A product of her Guardian training or a coping mechanicism learned from her own, personal tragedies, Vi’s able to compartmentalize her emotions and do what needs to be done.

Regarding the overall plot, Masquerade is exciting, action-packed with delicious amount of tension both in the story and in the relationship development. Whether it’s been overly apparent or not, Rachel has been developing a prominent story arc since Guardian, and in Masquerade we are given some major pieces to the puzzle. And while the story gives some answers, as any good story does, those answers raise more questions.

I’ve said it before and I’ll say it again, but Rachel Morgan does a fantastic job at fitting a complete story into the constraints of a novelette’s word count. So much happens in Masquerade, and happens in a way that felt natural and not rushed. I honestly felt like I’d read a full-length novel by the time I finished, and I believe that’s because she’s got a natural knack, an intuitiveness, for the pacing and organic development of both story and characters. Her writing never fails to impress me. It’s polished, her dialogue is snappy and clever, and she’s wonderful at emotionally connecting the reader to her characters.

Overall, The Creepy Hollow series just continues to get better and better with each novelette, and Masquerade is my favorite yet. 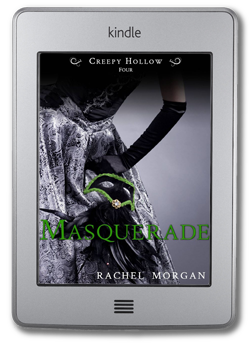