Princess Lucero-Elisa de Riqueza of Orovalle, has been divinely chosen to be the bearer of the Godstone. Every one hundred years a new bearer is chosen to carry God’s mark and to perform an act of pre-ordained Service. The younger of two princesses, Elisa feels anything but remarkable, however. Living in the shadow of her older sister, the sister who is skilled in matters of state, adept at court politics, regal, confident and not to mention a paragon of physical beauty, Elisa is the exact opposite of her sister. Physically large and plagued by feelings of inadequacy, she is unsure how she is supposed to fulfill her role as the Chosen One.

On her sixteenth birthday Elisa suddenly finds herself wife to the kind, yet distant King Alejandro de Vega of Joya d’ Arena who desperately hopes that the bearer of the Godstone will preserve his war-threatened country. Uprooted from her home, struggling to find her place in her husband’s household, ill-equipped to deal with the maneuverings of the royal court and ill-informed as to what her calling truly means Elisa determines to take charge of her destiny and learn what it means to be God’s chosen. As she accepts her role as the Godstone, she becomes the target of the enemy’s dark magic, the hope of her people and the love of a revolutionary. Will she be able to discover her purpose as the bearer before she loses all that she loves?

What made this book so lovely was simply, Elisa. From her physical description alone, she was a refreshing character from the YA norm. Not willowy and slender, not exotic and petite, but a girl of large physique, one with voluptuous curves. Carson has given this genre something it sorely needs, a “real” girl. Specifically, one that doesn’t wear a size 2; a girl that women of all ages, shapes and sizes can easily relate to. Elisa is very conscious of her weight, and though she at times is keenly aware of and embarrassed by her physical “shortcomings” in the eyes of others, she grows into an ownership of who she is and what she looks like that’s really beautiful to watch.

In addition to Elisa’s outward physical uniqueness, her internal growth, her maturity as a character and her journey toward the woman she’s meant to become make this book such a page-turner. When we first meet Elisa, she feels inadequate, that perhaps God has made a mistake in choosing her for His task – whatever that might be. In regard to her place in Orovalle, she feels somewhat less than, like the second-best daughter since she fails to measure up to her sister’s successes, skills and physical beauty. In her new home of Joya d’ Arena, she feels useless, hidden, ashamed of, floundering with no real purpose and she’s discovering that she seems to know less about her role as the bearer than everyone else. Through a series of events Elisa comes to the realization that she needs to start taking charge of her life and making her own decisions. As the war with Invierne looms closer she becomes a leader, utilizing her intuitive and analytical skills in the war effort, cultivating the ability to make the tough decisions that are required of a ruler. She is an excellent judge of character, is proficient at reading people and situations, and above all she is devout in her faith as she tries to discern her purpose in God’s larger plan. Carson has created a beautiful and compelling character in Elisa, a empathetic character that I connected deeply with and that, for me, cemented it as an instant favorite.

If you couldn’t tell by now, this book deals largely with a religious theme though I wouldn’t call this book religious in nature by any means. It is a fantasy, but not what I would consider high fantasy. The fantastic elements are rather mild, with enough sprinkled throughout the book to distinguish it as being not of our world. The historical tone of the book is what I would imagine 16th-17th century Spain to be like. The religion in the book, while strongly reminiscent of Catholicism, is never described in great detail. The rules and workings are vague, but you get the sense that Elisa’s God is a caring and somewhat personal deity. As a Christian myself, I did appreciate the very respectful way that Carson handled the religious aspect. When crafting the kind of story that deals with divine destiny, and especially when in reference to “Big G” God, it’s easy and almost expected that God will be portrayed as a remote, uncaring puppet master of fate, but she managed to steer clear of those waters and ended up combining divine purpose and free will in an interesting way.

Themes and characters aside, the story it self was very easy to get swept up in. Despite whatever else was going on in the story, at the forefront was the fact that war was brewing against this terrifyingly large army of Invierne who conspired with dark magic in an attempt to destroy everything Elisa holds dear. And somehow against this evil horde, she is supposed to become the savior of her people. There is intrigue, betrayal, journeys, unexpected twists, daring escapes and romance as Carson slowly builds up the suspense surrounding the inevitable final clash in which Elisa will either falter or prevail before the forces of darkness.

Overall, do yourself a gigantic favor and read this book. It’s an enthralling and romantic coming-of-age fantasy that will sweep you up and hold you captive until the very last page. 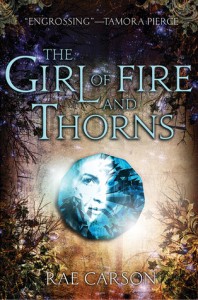 Title: The Girl of Fire and Thorns

For all you Columbus book lovers, Rae Carson will be signing copies of The Girl of Fire and Thorns on September 20th at 6:30pm at Cover to Cover Books on High Street.  So mark your calendars!