In the icy, monster-plagued world of the Frost, one wrong move and a person could end up dead—and Lia Weaver knows this better than anyone. After monsters kill her parents, she must keep the family farm running despite the freezing cold and threat of monster attacks or risk losing her siblings to reassignment by the village Elders. With dangers on all sides and failure just one wrong step away, she can’t afford to let her emotions lead her astray. So when her sister finds a fugitive bleeding to death in the forest—a young stranger named Gabe—Lia surprises herself and does the unthinkable.

She saves his life.

Giving shelter to the fugitive could get her in trouble. The Elders have always described the advanced society of people beyond the Frost, the “Farthers,” as ruthless and cruel. But Lia is startled to find that Gabe is empathetic and intelligent…and handsome. She might even be falling in love with him.

But time is running out. The monsters from the forest circle the farm at night. The village leader is starting to ask questions. Farther soldiers are searching for Gabe. Lia must locate a secret organization called the Thorns to help Gabe escape to safety, but every move she makes puts her in more danger.

Evergreen branches coated in ice; the bewitching magic of falling snow; the delicious icy crunch underfoot; the solitary, yet peaceful, feeling that the world is quiet and wiped clean under a frosty blanket of new white; the thought that with the snowfall you have indeed managed to capture a single moment in time, if only for a instant – a world encased in snow. The world of Frost is stark and haunting, but also beautifully melancholy and a bit romantic. It’s not merely the physical world that enchants through the vivid descriptions and resulting ambiance, however. It’s the larger world and the tone it sets. It’s the political circumstances, it’s the rumors of far-away lands where tyranny rules, it’s the idea that some things are worth fighting for, it’s the monsters that roam the Frost, it’s the forgotten histories, it’s the tenacity of Lia’s people, and it’s the day-to-day struggle to survive. It’s at once both grand and personal, and author Kate Avery Ellison has brought her lovely world all to life in her wonderful new dystopian fantasy series, The Frost Chronicles.

Lia Weaver and her family have made their home in the Frost, a frozen forest beyond the reaches of the imperialistic and ruthless Aeralis, where they live in relative freedom and peace. Their village has thrived in the Frost because of its sense of organization, community, and the citizens’ adherence to the rules of the town. It’s a communal type idea – that every family has something worthwhile to contribute. Instead of currency, the villagers have to meet a weekly quota for goods produced, and in exchange for sharing their materials with the town, they are given the provisions necessary for survival. Lia’s family, as their surname indicates, produces the town’s yarn. It’s not a perfect system, but it works to keep their small community growing and going. However, this community’s freedom from the tyranny of Aeralis comes at a price. Every night, when the sun falls below the horizon, the woods are filled with Watchers – fearsome, monstrous creatures that kill anyone found in the woods after dark. The villagers are helpless against the Watchers, and their only recourse is to take refuge indoors after dark.

Two months ago, both of Lia Weaver’s parents were found dead in the Frost, and Lia is forced to suddenly transition roles from that of child to provider of her family. With her twin brother Jonn helpful, yet physically disabled, and her younger sister a flighty, slightly irresponsible mess, the task of ensuring her family’s survival falls to Lia. I found Lia to be an extremely touching character, and I wondered what she would be like had not this tragedy befallen her family. She’s a very strong girl, but she’s strong not just because it’s inherent in her character, but because she must be. Her family has no one but her.  Seeing the confidence she projects to others juxtaposed with what’s running through her mind, the reader is privy to Lia’s doubts, her vulnerabilities, and she just feels very real. Lia is a no-nonsense kind of person, not given to frivolities as she can’t afford such luxuries, and yet one gets the sense that perhaps she wasn’t always so much this way. She’s also intuitive, direct, discerning, quick-witted, a bit more quiet in nature, and doesn’t give her trust easily. But despite her sometimes prickly facade, she loves her family and their home fiercely, and is willing to do what she must to preserve and protect who and what she loves.

When Lia stumbles across an injured Farther boy in the woods near her farm, her first inclination is to leave him to the Watchers – this boy will undoubtedly bring trouble to her and her family. He is a Farther after all, evil and ruthless. But something about him compels her to save him, and she soon learns that the truth isn’t nearly as black and white as her village leaders might have her believe. Gabe is hardworking, determined, caring, resilient and funny. He’s nothing like what Lia pictured a Farther to be like, and certainly not the dangerous criminal the Farther soldiers accuse him of being.

Like Lia, Gabe is one of those characters I was drawn to instantly. Maybe it’s that I have a soft spot for wounded things or maybe it had to do with Lia’s greatly conflicted feelings, but it quickly became clear that Gabe is more than his stereotype. While the reader does get some back story as to how he ended up an escaped prisoner in the Frost, much of Gabe’s history is still, as of yet, untold. Gabe is a bit of a mystery, but not an unsatisfying one because you do learn so much about him in other aspects. However, I feel like there’s a lot more to him than what’s been given to the readers thus far, and I’m dying to know the answers to all my burning questions.

The connection between Lia and Gabe is extremely sweet and gradual – a growing mutual respect and admiration. However, both have certain priorities that take precedence over any possible budding romantic attraction and I found the way their relationship develops in light of these responsibilities to be very realistic.

The plot was rather simple, not too complex. However, as with Gabe, there’s a lot going on just beneath the surface that hasn’t been touched on yet. I’m extremely excited about the directions in which this story might go, and I predict the next book will dig a lot deeper into the history and the world, and that it’ll also be a little more plot-centric now that the characters have been firmly established. But that said, I don’t mean to imply that Frost disappointed in depth or story.  I’m just eager for more. For me this book was a page turner; it’s one of those books where I sat down to read it, flew through it, and suddenly I was at the end wanting the next book immediately.

Overall, what Kate Avery Ellison has created here in Frost – the haunting world, the lovely characters, the compelling story she’s weaving –  is the captivating beginning of a fascinating, new dystopian fantasy series. 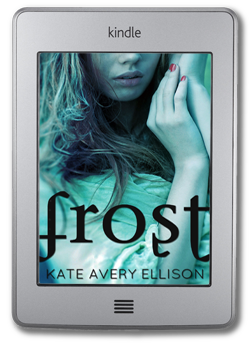 A little bit about Kate… 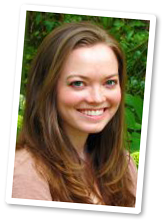 I’ve been making up stories since I was five years old, and now I’m thrilled to be able to do it as a full-time job. I have an obsession with dark fantasy, dystopian futures, and Pride and Prejudice-style love stories full of witty banter and sizzling, unspoken feelings. When I’m not writing, I’m creating digital art, reading funny blogs, or watching my favorite shows (which include TVD and BSG). I live with my geeky husband and our two bad cats in Atlanta, GA.

You can find the other blogs on the tour HERE.