Anna is looking forward to her senior year in Atlanta, where she has a great job, a loyal best friend, and a crush on the verge of becoming more. Which is why she is less than thrilled about being shipped off to boarding school in Paris – until she meets Etienne St. Clair: perfect, Parisian (and English and American, which makes for a swoon-worthy accent), and utterly irresistible. The only problem is that he’s taken, and Anna might be, too, if anything comes of her almost-relationship back home. As winter melts into spring, will a year of romantic near – misses end with the French kiss Anna – and readers – have long awaited?

Warning: I hate to do this because I try NEVER to be spoilery but this review cannot be written without containing a few spoilers.

Anna and the French Kiss on the surface is simple straightforward Chicklit. It’s sweet and innocent with loveable characters and the backdrop of Paris. What more could you ask for? Unfortunately a lot.

I really had a hard time liking either of the main characters. Anna seemed really shallow and whiney. She was all put out that she got to spend her entire senior year in Paris…THE Paris. She whined about it incessantly through the first chapters and then continued to whine about her father (who was very Nicholas Sparks-esque which did make me laugh a lot) for most of the story. And like omigosh, she only gets like just enough allowance to go to like 6 movies in one week. Like really? That’s like so unfair, Dad. Hmmm…not really feeling it. To be fair, her parents did fight a lot and her dad is rather distant and like I said, Nicholas Sparks so a bit melodramtic but I felt like she was overdoing the teenage angst. The one thing I did like about her was her unwillingness to come between Ellie and St. Clair/Etienne. I admired her for that. It showed strength on her part and a true depth to her feelings for him. Wanting him to be happy and be his friend until he was willing to break it off with his girlfriend.

Etienne/St. Clair is a super sweet boy. I loved the things he did for Anna and the way he treated her for the most part. They had an adorable relationship, very sweet and innocent. However, despite this he is overwhelmingly weak when it comes to relationships. This is the part that bugged me the most. He continually turns from his feelings for Anna and runs back to Ellie long after he should have ended it. He waits around for her to make HER feelings completely clear by forcing her to ask him to kiss her before finally ending a relationship that should have been over MONTHS ago.

I could have maybe overlooked this if he had come to her at the end and said in his polite British accent, “You know what, Ah-na, I’ve been a bloody wanker. Please forgive me.” But no, rather than taking the blame for it, he blames her for not telling him how she felt and trying to move on with other guys. HE HAD A GIRLFRIEND! She was not going to be THAT girl. Very frustrating and sort of ruined my view of him. I wanted to see a guy with some guts, who’s willing to step out of a relationship just because it’s not what’s right for him, not stay in a relationship until he’s sure he can jump right into another one because he’s afraid of being alone. It really weakened his character for me and took away the depth of his feelings for Anna. If he really loved her that much, why would he stay with someone else?

Also, the secondary characters, other than Rashmi and Amanda, were very wooden and flat. Rather than adding a lot to the story I felt like they were simply plot devices and didn’t really help me to love the main characters. Etienne’s bad relationship with his father could have been a lot stronger too. He was shown as controlling and there was some hinting at possible abuse but nothing concrete. He was a jerk for sure but didn’t make me feel an intense hatred for him the way I have in other books. He just annoyed me and pointed out Etienne’s weakness more than anything.

The romance between Anna and Etienne/St. Clair was so beautiful. It was built gradually with the innocence and intensity of first love. Perkins captures that delicious feeling very realistically, however it is completely overshadowed for me by his tediously long relationship with Ellie and Etienne/St. Clair’s weakness.

In short, Anna and the French Kiss just didn’t do it for me. I really did not enjoy this book. I hoped I would. I kept trying to, but honestly I just couldn’t seem to figure out how to like it. I questioned this at first because it’s very well written and the setting is gorgeous. But it all boiled down to the actual story and it’s characters. For me, that’s not a fun read. 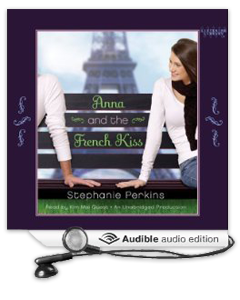 Title: Anna and the French Kiss