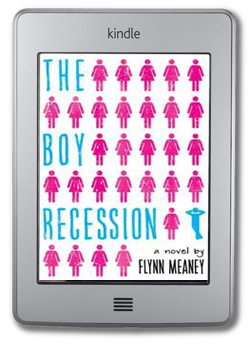 As if dating wasn’t hard enough without a four-to-one ratio! (Goodreads summary)

“’Okay, I’m kidnapping her and making her my AP physics experiment,’ Darcy tells me, dunking her green tea bag like she’s trying to drown a sixteenth century witch.  We’re waiting for my Frappuccino while Aviva and Bobbi snag a table.

‘I mean, this is incredible.  All the variables are the same.  This is the same Starbucks we always come to.  This is the same time we’re always here.  The only thing that’s different is that we brought Bobbi.  Does she literally attract boys?’”

“’Stop messing with it,’ Eugene tells me. ‘It’s supposed to have that part in it.  You can’t mess with the part.

‘I hate having my hair parted,’ I tell him.  ‘It’s too neat.  I look like one of the Hitler Youth.  This is a politically incorrect haircut.'”

“In my rush, I hadn’t tied my shoelaces. Noah was now tying them for me.

He looked up at me through his dark fringe of lashes and smiled. The expression on his face melted me completely. I knew I had the goofiest grin plastered on my lips, and didn’t care.

‘There,’ he said as he finished tying the laces on my left shoe. ‘Now you won’t fall.’

“‘You don’t want me.’
‘You have no idea what you do to me,’ he said as he stood. ‘I could barely keep my hands off you last night, even after seeing what you’d been through this week. Even after know how wrecked you were when you told me. And I’m going to live an eternity in hell for that dream I had about you on your birthday. But if I could call it up again, I’d spend it twice.’