Cammie Morgan is a student at the Gallagher Academy for Exceptional Young Women, a fairly typical all-girls school-that is, if every school taught advanced martial arts in PE and the latest in chemical warfare in science, and students received extra credit for breaking CIA codes in computer class. The Gallagher Academy might claim to be a school for geniuses but it’s really a school for spies. Even though Cammie is fluent in fourteen languages and capable of killing a man in seven different ways, she has no idea what to do when she meets an ordinary boy who thinks she’s an ordinary girl. Sure, she can tap his phone, hack into his computer, or track him through town with the skill of a real “pavement artist”-but can she maneuver a relationship with someone who can never know the truth about her?

Cammie Morgan may be an elite spy-in-training, but in her sophomore year, she’s on her most dangerous mission-falling in love.

Cute, straight-forward, and sweet. That’s how I’d describe I’d tell you I love you, but then I’d have to kill you but it just isn’t what I’m looking for. I’d highly recommend this series for younger teens or even middle grade readers; however, for those of us looking for a bit more sophisticated writing, I’d suggest Ally Carter’s Heisty Society Series.

Here’s why. The romance seemed rather pointless at the end, more like a plot device than a story. Josh was flat and honestly a little boring, and by the end it was almost relief the way it worked out.

I loved Cammie and her friends. They were fun and smart and hilarious, but they were rather immature. They didn’t really feel like emotionally or socially they were ready for much more than crushes.

The plot development was a little formulaic whereas Carter’s Heist Society books were a bit more sophisticated. These are definitely a bit more on the young YA scale, which isn’t a problem but it just didn’t grab my attention like the Heist Society books. Maybe it’s unfair to compare them, however they are the reason I tried the Gallagher Girls in the first place. For younger YA readers, this is perfect. Just not for me. 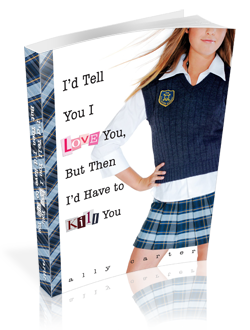 Title: I’d Tell You I Love You, But Then I’d Have To Kill You