Yet nothing in this lavish world is what it seems. With darkness looming and an entire kingdom depending on her untamed power, Alina will have to confront the secrets of the Grisha…and the secrets of her heart.  (Goodreads summary)


From the lush descriptiveness of Alina’s world, to the formidable and mysterious Darkling, to the countless horrors of The Unsea, to the rich opulence of Ravka’s royal court and the inherent treachery of its politics, to the threadbare tents of the king’s army, to the intricately carved walls of the Little Palace to the gorgeous, Tolkien-esque map just beyond the title page – there is something about this book that had me utterly spellbound by every word. Something threading through it, binding every fascinating detail into a whole and brilliant singular piece — Alina Starkov.

An orphan of Ravka’s numerous and ongoing border wars, Alina has felt misplaced and unwanted for most of her life. All she’s ever wanted is to feel like she belongs, and the only place she’s ever felt like she does is at her best friend Mal’s side, with whom she’s secretly half-in-love with. Then came that fateful day in the Shadow Fold where in an attempt to save Mal she unleashes a power she didn’t know she had, and is ripped from her life as a lowly, mediocre cartographer’s apprentice and thrust into the world of the Grisha, an order of Ravka’s magical elite. But does she really belong here? Does she really want to belong here?

Alina. There’s a very relatable everywoman quality to Alina that makes her empathetic; her struggles, though they be of the fantastic sort, are at their core easy to identify with. And yet, while she’s a very relatable character, she’s a wonderfully unique as well – a character with many facets, and one who felt like she could just walk off the page.

As previously stated she’s a person who longs to belong, and yet that desire, though not always, is often tempered with a good dose of common sense. Surrounded by the overwhelming opulence, the pretentiousness, the gilt facade of the Ravkan royal court, Alina is unfamiliar in the art of court politics, diplomacy and affectation. Alina is an honest, frank sort of person and although she does exercise restraint and discretion, she does speak her mind. She’s witty, grounded, shows a genuine compassion to all living things, and she has a devotion to duty that is admirable.

Alina, for all her doubts, her feelings of being alone, of helplessness, her moments of insecurity, she’s a character who fights against being mastered by her darkness. The fundamentals that make up who she is are deeply rooted and not easily ungrounded.

The Darkling. Darkness incarnate and the most powerful Grisha alive, The Darkling is an utterly fascinating character. He was as expected  — dark, dangerous, abrupt, intimidating, with a charismatic and commanding presence. But at the same time he is also extremely unexpected; not, certainly, as Alina expected him to be. The light to his darkness, at once his match and his antithesis, The Darkling is drawn to Alina as she provides the key to protecting Ravka from the ever-encroaching Shadow Fold.

Mal. Growing up as orphans in the generous Duke Keramsov’s household, Mal & Alina formed a deep, abiding connection to each other. They might not have family or prospects for the future, or people who really care about what happens to them, but they always had each other, looked out for each other, no matter what. Truth-be-told, Alina’s always been a little in love with him. And who wouldn’t be? Mal’s funny, charming with an irresistible cockiness. He’s a bit of a ladies’ man, but he’s loyal, thoughtful, courageous and an extremely skilled tracker in the Ravkan army. But when Alina’s power is exposed, when she is ripped away from him and taken to the Little Palace to train with the Grisha, their friendship undergoes a definitive shift.

World & Story. This pseudo-Russian fantasy world that Bardugo has created is beautiful, complex, complete with a luscious richness and a satisfying amount of depth. The fantasy elements are wonderfully conceived and executed. While the explanation for how the magic of this world works is kind of a simple idea, it’s also not. Another piece of Shadow and Bone that comes into play is the political and economic situation of Ravka. The Border Wars have taken their toll, Ravka’s leadership is corrupt and questionable, and the Shadow Fold has cut the land in half, making access to the country’s seaports extremely hazardous and unreliable. And throughout the book, Bardugo skillfully creates this mounting undercurrent of urgency and weaves an intriguing, provocative web of the morally grey variety; both of which I happily found myself caught up in.

Overall. What more can I really say? I love, ❤, and adore this book. So much so that it took me seven months to finish this review and figure out just how to convey this love without it being mostly non-verbal, fangirly squealishness. Seven months to get some 20/20 hindsight and perspective on it. Seven months later, I still love it just as much, and it’s a permanent fixture on my favorites shelf. 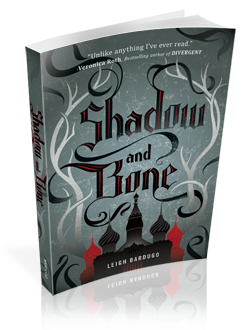