In 2036 New Jersey, when teens are expected to become fanatically religious wives and mothers or high-priced Surrogettes for couples made infertile by a widespread virus, 16-year-old identical twins Melody and Harmony find in one another the courage to believe they have choices.

Anyone who knows me is probably quirking an eyebrow, and asking, “Heather, are you ok? Aren’t you the same girl who wants a chili-pepper rating on Adult books and cringes/giggles whenever books discuss ‘nipples tightening’? Aren’t you the gal who adamantly proclaims the gloriousness of YA-lit for it’s relative PG-13ness?” Yes, I am that girl. I probably will always be that girl and I’m not ashamed of it.

To be honest, Bumped caused me a lot of inner turmoil. I wasn’t sure how to rate it or what to think. What it came down to is this: It made me deliciously uncomfortable, completely captivated my attention for the better part of a day, and left me thinking about our world and our twisted attitudes towards sex, social media, and teens, and for a novel to do that makes it not just a good book, but a true work of art.

First of all, you have to consider the genre. In my opinion, Bumped has been miscategorized. I don’t believe it’s a dystopia at all. There are some elements of dystopian literature, I suppose, but it’s more accurately a satire. Once I began to accept this, I much more readily saw the novel’s message. I was able to see its value and understand where the author is coming from.

The story is set in a futuristic world where teens are valued for their fertility because adults cannot have children. Mainstream culture, Melody’s POV, sees teen pregnancy as a major money-maker and pregnant teens are celebrities because they are “saving the human race.” There is propaganda supporting this worldview. Even music and branding back up the sentiment that being a pregnant teen is a good thing. The other side of the coin, is Harmony’s POV–the “Christian” perspective. It is not the Christianity that I myself practice and therefore I bristled (we’ll talk about that in a bit). I hate stereotypes and let’s face it, in the novel it’s really more like an Amish perspective with less grey.

At first, I was doubly offended. I was offended by the off-hand comments like being “Born to Breed…Do the Deed” which is one of the slogans from Melody’s world; tweens wearing fake baby bumps; sex being nothing more than “bumping.” I was also offended by the misrepresentation of Christians and by the way it made my own abstinance as a teen and young adult seem ridiculous and outdated–please no comments about this, I was saved a lot of heartache, I didn’t get any STDs and it was my my choice. As I gave the book a chance and got further into the actual point behind the story, I realized it was meant to offend. Both Melody and Harmony’s perspectives show that they are not happy in their circumstances. They don’t think it’s right. In fact the worldviews of both sides are used to show their absurdity. Sex for sex’s sake is not glamourized. Teen pregnancy, though glamourized by the culture, is not glamourized by the characters. Christianity is not completely written off either. In fact, Bumped actually calls for more of a middle ground. It shows a need for our world to not be so flippant and obsessed in our views of sexuality and celebrity and for Christians to not be so out of touch with our modern culture that we become ineffective.

As in any good satire, the story was meant to point out the flaws of our society. Hmmm…too much sex, too much social media, marketing our vices as big business, marketing our vices as good for the country…sound familiar? Not yet? How about these examples? 16 and Pregnant. Anyone? Facebook as far away as the nearest smart phone? Porn available in two clicks of a mouse? Magic Mike? Fifty Shades? Must I go on? We are an over-sexed, over-gossipped, over-mediaized (yes, I just made up a word…on a blog…about too much media…I see the irony!)…you get my point. In short, this fabulous novel does what it sets out to do and makes the reader uncomfortable enough to question his/her worldview and that is, in no way, a bad thing.

That said, Bumped is not just a mocking of society at large, it is a story after all and a well done one at that. I fell in love with Melody and Harmony and Zen. Even Jondoe was interesting and NOT a cardboard cutout. I would love to see more characters in the next book, but the lack of adult involvement is part of the point. It’s possible to “parent” long-distance…meaning from all over the world…in the society of the book. Yeah, scary, I know. I loved the dual perspectives and the depth each gave to their conflicted, contradictory, yet amazingly similar worldviews. The dialogue and inner monologues were ironic and terrifically hilarious. It is lol funny and smh shocking. 😉

Overall, Bumped is unputdownable, hilarious, and makes you think. I look forward to seeing what happens next in Thumped.

DISCLAIMER: Not recommended for younger or immature teens based on mature language and sexual discussion and the potential for complete and utter misinterpretation by younger teens. This is a great book to read WITH your teen and discuss the incredibly relevant issues handled satirically in this novel. Also, Christians (and I’m including myself in this), give this a chance…read the WHOLE book before casting judgment and keep your mind open. It’s a unique perspective and it is satire, keep that in mind. 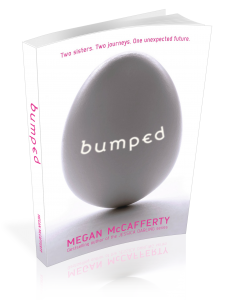