Sixteen-year-old Noli Braddock’s hoyden ways land her in an abusive reform school far from home. On mid-summer’s eve she wishes to be anyplace but that dreadful school. A mysterious man from the Realm of Faerie rescues her and brings her to the Otherworld, only to reveal that she must be sacrificed, otherwise, the entire Otherworld civilization will perish.  (Goodreads summary)

How does the saying go? “Good Steampunk is hard to find?”

Ok. So maybe that’s not precisely how it goes, but sadly, that fact doesn’t make the statement any less true.

I’ll admit, Innocent Darkness first caught my eye because of it’s cover. Adorned with gears, a dirigible, the obligatory corset/pocket watch/brass-‘n-leather goggles combo, and a rebellious looking heroine ready to flout Victorian-era conventions, this cover said to me, “Hi there. I’m steampunk. Grab a cuppa and read me.”

And I said, “Thank the Aether.”  It’s been a while since I read an excellent book of the steampunk variety.

Sadly, I shouldn’t have pinned my hopes on this one. Typically, I don’t even mentioned covers in my reviews, but for this book I felt compelled to say something about it simply because I think the cover is misleading. Innocent Darkness is barely, barely Steampunk. Instead it’s more a story of faerie, which is fine. However, in my opinion, this book shouldn’t be visually marketed so heavily as a genre it barely touches on. Besides the altered historical time line (which the reader scarcely sees evidence of), a flying car that introduces our heroine, and several mentions of aether, airships and mechanical doodads, the Steampunk element is pretty superfluous. At least in this first book. Who knows? It could become an integral part of the world and story in subsequent novels… just not in this one.

The heroine, Magnolia, or “Noli,” is advertised as a “hoyden.” From the saucy vibe of the girl on the cover and from the blurb, I was really hoping for a sassy, kick-butt, strong female lead who’s struggling to find her place in a restrictive Victorian society. Unfortunately, the cover misled again. In the end, I found Noli to be almost the kind of girl she despised; the girl she insisted she was not. She isn’t what I’d call mindless, prattling or insipid, but she doesn’t really stand up for herself either, or even have much of a backbone. Instead she tends to do what the men in her life want her to do. She almost needs their affirmation and therefore doesn’t feel at all independent or equal to her male counterparts. She’s a follower.  She’s not brash. She has rare moments of sass. And I know that the title is Innocent Darkness, but I found Noli to be very naïve for a girl who’d buck her mother’s authority and the law to fix cars and hoverboard illegally. Who she is at the beginning, compared to who she proves to be throughout, compared to who she says she is just feels incongruous. In the end, Noli just doesn’t mature as a character, and I just couldn’t find that all-important connection to her, which is unfortunate.

Moving on to the romance. Innocent Darkness does feature a love triangle, a love triangle that, in my opinion, feels forced on Noli’s part. I won’t say much about the whole sordid affair (because it’d reveal too much about the plot), but after certain revelations come to light, I just had a really hard time believing Noli’s continued interest in one of the guys. (We’ll call him Boy #1.) Especially considering who the Boy #2 is. Especially when Boy #1 means her harm. To me, Boy #1 wasn’t a handsome, troubled-yet-redeemable bad boy, he was the type of guy who screams “Danger! And I don’t mean the good kind!” Seriously girl, put your Nikes on and make tracks.

In regards to the story, I found the plot interesting enough, if not predictable. It was compelling in that I wanted to see where the love story ended up, if Noli would achieve any growth as a character, and how the main plot point would resolve. I did find the writing style a bit hard to adjust to. It wasn’t middle grade, it was definitely YA, but perhaps more simplistic in style? I also found the dialogue to be a bit awkward at times, perhaps due to further emotional development being needed in some situations. The dialogue is another reason why I found Noli to be overly naïve, I think. Also, the storytelling style and her naivete also didn’t jive somehow with the… <ahem>… somewhat mature situations that went on between Noli and her gentlemen.

Overall, while I like the idea behind Innocent Darkness, a lackluster heroine, a forced love triangle, a predictable resolution, and the whole Steampunk question ultimately left me disappointed.

Due to some mature content, I’d recommend this book for an older teen audience. 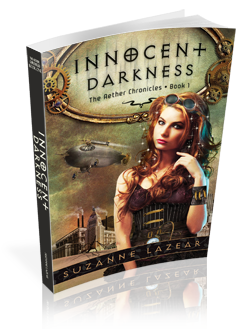