In a future world, Vampires reign. Humans are blood cattle. And one girl will search for the key to save humanity.

Allison Sekemoto survives in the Fringe, the outermost circle of a vampire city. By day, she and her crew scavenge for food. By night, any one of them could be eaten.

Some days, all that drives Allie is her hatred of them. The vampires who keep humans as blood cattle. Until the night Allie herself is attacked—and given the ultimate choice. Die or become one of the monsters.

Faced with her own mortality, Allie becomes what she despises most. To survive, she must learn the rules of being immortal, including the most important: go long enough without human blood, and you will go mad.

Then Allie is forced to flee into the unknown, outside her city walls. There she joins a ragged band of humans who are seeking a legend—a possible cure to the disease that killed off most of humankind and created the rabids, the mindless creatures who threaten humans and vampires alike.

But it isn’t easy to pass for human. Especially not around Zeke, who might see past the monster inside her. And Allie soon must decide what—and who—is worth dying for. (Goodreads summary)

Julie Kagawa, you’ve done it again. I thought I was done with Vamps and you have proven me wrong. The Immortal Rules is a tribute to strong female leads with kickbutt skills. Incredibly enjoyable read. Kagawa has created a unique, dystopian, vampire world that is both complex and interesting. Just when I thought I’d seen it all when it comes to vampires, I was blown away.

I was hesitant to pick up this book from the start because I knew I’d compare it to The Iron Fey, Kagawa’s other series of which I am a huge fan, and I didn’t think that would be fair. I mean let’s face it, Prince Ash makes me list of top 5 book boyfriends…that has to tell you something. How do you top that? However, when I got a great deal on Audible for this book I figured I should give it a try.

I have to say, I was a little disappointed at the beginning. The narrator, Therese Plummer, is fantastic. LOVED her. Her boy voice sounds like a boy, not a constipated girl. That’s HUGE for me. The story just seemed so dark and the language was really heavy. Allie was angsty to a degree that it almost annoyed me and I didn’t know if I could get into the story.

It took me a month to get through the first half, then Zeke entered. Ah, Zeke, you sly dog. You intriqued me. You made me question my dislike of Allie because you made her think and question who she is and why. You were kind when you had no reason to be. You were loyal and a boy with extraordinary faith. You were vulnerable. I couldn’t help but like you.

Allie grew as a character and by the end she had won me over. She’s an Asian girl (ignore the cover) with a katana and she knows how to use it. This was my favorite part of her character. Allie becomes this witty, sarcastic and utterly fabulous vampire ninja. Truly perfect for the story.

My favorite part of Kagawa’s style in general is the banter. This was true of The Iron Fey and is true in The Immortal Rules. She’s a master of the one-liner, sarcasm, and wars with words. Love it. However, if you’re looking for more Iron Fey wait for The Lost Prince to be published this fall, you will be disappointed by this story because this is very different. Not bad, just different. I had to completely separate myself from the fact that Kagawa wrote both because they are two different worlds. She has done a great job making this it’s own series not just replacing Fairies with Vampires and for that I’m grateful. You can’t mess with a good thing! =)

Kagawa’s world building always takes a while. I felt the same way in the first Iron Fey book. Once she gets you there though, it’s beautiful. Her characters spring to life and you are desperate to know what happens next. The plot was interesting but lagged a bit in the middle but the second half was nonstop action.

Overall, it was a very fun read and I am thoroughly looking forward to the next in this series.

Disclaimer: Mature language was a bit gratuitous, in my opinion. 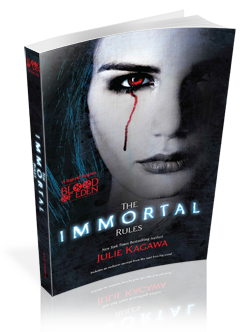