Tempest Maguire wants nothing more than to surf the killer waves near her California home; continue her steady relationship with her boyfriend, Mark; and take care of her brothers and surfer dad. But Tempest is half mermaid, and as her seventeenth birthday approaches, she will have to decide whether to remain on land or give herself to the ocean like her mother. The pull of the water becomes as insistent as her attraction to Kona, a gorgeous surfer whose uncanny abilities hint at an otherworldly identity as well. And when Tempest does finally give in to the water’s temptation and enters a fantastical underwater world, she finds that a larger destiny awaits her-and that the entire ocean’s future hangs in the balance. (Goodreads summary)

Tempest Rising is my first mermaid book. It is a thrilling read. I really enjoyed a dive into this new world. For a while I was against mermaid books for me, because I felt like I wouldn’t be able to get over a certain Little Mermaid feeling. I worried I’d be humming, “Kiss de girl” or “Under da Sea” while reading. However, I met Tracy Deebs at RT in Chicago and she was so awesomely sweet. She was telling Aly and I about her dark mermaid world and I was hooked. So thanks Tracy for winning me over. =)

First of all, the cover is gorgeous. I love the details and tatoo. The incredible hints at darkness and stormy waters evoking the feeling that this is no Disney Princess movie are gorgeous. I also loved the characters. Tempest is a bit of a tom-boy which I love. She’s conflicted and wounded by her mother’s desertion when she was young. She has no desire to be a mermaid and wants nothing more than her happy, semi-normal life. She felt very real to me. Her devotion and loyalty to her family and her love of the water make her a genuine, loveable character. She holds everyone at arms length, because obviously she can’t go around telling everyone she’s part mermaid, lending her a sense of vulnerability because she has no one who really knows her fully. Enter Kona, the surfer she meets randomly during a gigantic storm. He seems very “other” and understands her on a deeper level. They have a sudden connection (though not insta-lovey) and despite the fact that Tempest has a boyfriend, Mark (who we will talk about in a minute), captivates her thoughts. Tempest longs to be known completely for who/what she is and somehow she knows Kona could be that person. Kona is intriguing and mysterious but also funny and endearing. He attempts to lead Tempest to her own answers instead of handing her everything. I enjoyed their firy banter. I loved the secondary characters as well. Tempest’s dad and brothers felt real. Her other friends were interesting and fun. All in all, I felt like the characters were well rounded and fully developed.

Deebs does a great job building her world and the plot through it. I loved how strong Tempest becomes throughout. The development of the story was perfect and felt well-paced. The final battle was well done and had extremely realistic consequences. The world was built solidly and though a bit on the dark side not over the top.

Where Tempest Rising fell short for me was the love triangle. At the beginning of the story, Tempest is dating Mark. He’s a possessive, short-fused guy who really doesn’t know Tempest very well. I had a hard time seeing why they were together other than the fact that they both love surfing and they have known each other for a long time. At times he seems to genuinely care about Tempest but for the most part I just didn’t see the draw other than he is good-looking and land-based. I get that’s he feels more secure to her and blah blah blah but I just didn’t buy it, at least not when you add Kona to the mix. To me, it’s always better to go with the guy that knows the real you and still loves you. By the end of the book, I just couldn’t understand how you can compare the jealous, possessive Mark to the incredibly awesome, loveable, understanding Kona and not get who you should pick? But that’s just me.

Overall, Tempest Rising was a totally recommendable book. I enjoyed the story and the characters. Deebs’ beautiful sea-world and its creatures is gorgeous and capitivating. I’m looking forward to reading Tempest Unleashed in the near future. 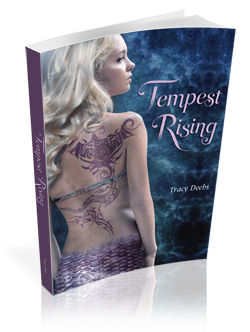 Published: May 10th 2011 by Walker Books for Young Readers