A companion novel to WHAT A BOY WANTS.

Jaden Sinclair knows he’ll never amount to anything…so why would he deserve a girl like Priscilla Mendoza?

After getting a huge bomb dropped on him, Jaden lashes out and lands himself in jail. Everything in his chaotic life is turned upside down and to make it worse, his mom kicks him out in order to side with his dad. Yeah, he’s totally a prize for a girl like Pris.

Sebastian, Aspen, and Pris are all going places in their lives…and he knows he can’t keep tagging along for the ride.

The group has one last chance for The Epic Adventure they’ve been looking for: a road trip to New York, where Jaden’s friends will be going to college. Unfortunately, the more time Jaden hangs around Pris, the harder it is to keep the carefully constructed walls between them so she doesn’t find out what a train wreck he really is.

When the trip ends, Jaden has to decide if he’s ready to say goodbye to his friends, and the girl he loves. He knows what he needs, but will he be man enough to go for it?

Nyrae Dawn knows how to write boys, and write boys well. With Bastian, and now with Jaden, I’m so impressed with how she can get inside their heads and make them convincingly all-boy, but also give them a layer of vulnerability and real emotion. Where Bastian is amusing, clueless, and hilariously adorable, there’s a more serious, emotionally scarred, tormented side to Jaden that I just gravitate toward. His home life less than ideal, Jaden has grown up enduring years of heavy emotional abuse, damaging his view of himself and skewing his perception of his relationships with others. There’s more of a seriousness and a gravity to Jaden that you get quick glimpses of in What a Boy Wants, but that are more fully explored in What a Boy Needs. He only shows the world what he wants them to see – including to some degree Bastian, Pris and Aspen – afraid of how they’ll react if they really knew him. Underneath Jaden’s macho bravado is a guy dealing with some pretty heavy baggage and my heart just ached for him as he deals with his various family issues and questions of his own self worth.

With Jaden, Pris, Bastian and Aspen graduating high school, What A Boy Needs picks up their story almost a year later. Things are fantastic between Bastian and Aspen, who are still so cutely in love. Bastian… the boy is completely and happily whipped and it’s adorable. Things between Jaden & Pris, however, are another matter altogether. Jaden’s liked Pris forever. In What A Boy Wants, it’s completely obvious that Jaden has a “thing” for her, but you don’t really find out how much he likes her until you’re in his head in What A Boy Needs. He’s hung up on the idea that a guy like him doesn’t deserve a girl like her, and since their “almost” encounter last summer, things haven’t been the same – their friendship has become strained and uncomfortable. While Bastian and Aspen had their ups and downs, their story is more ultimately more fun; in some ways, their relationship mishaps more funny and lighthearted. Jaden & Pris on the other hand are two stubborn people who’ve been shaped and scarred by their difficult home lives – their survival of their families dysfunction. Their story feels a bit more serious than Bastian & Aspen’s, a bit more grown up, and I love it for that reason.

Never fear, despite the slightly heavier emotional issues Nyrae Dawn deals with in this novel, it still has all the humor and heart of What A Boy Wants. Much chuckling and giggling ensued upon the reading of this book. I love the constant banter between the four friends. I love how they can just be together; how they can laugh and joke, yet also step up to the plate when one of their own is hurting. They’re true friends – in for the good, the bad and the ugly.

Overall, What A Boy Needs is a fantastic and irreverently funny read about the truth of love, the steadfastness of friendship, the freedom of moving forward, and where a boy’s worth truly lies. 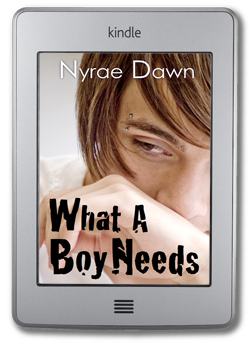 Title: What a Boy Needs