What would you do if someone told you that your past and everything you believed was a lie?

Cameron Winters is a freak, a mind reader who can hear the thoughts of those around her. Although her life has been far from ideal, she has finally found peace on a Caribbean island far away from her troubles. But her troubles are about to find her in the form of a gorgeous government agent named Maddox.

Maddox claims Cameron’s father sent him to protect her from encroaching enemies. There’s only one problem…Cameron’s father has been dead for over a decade. When men arrive, threatening Cameron’s very life, she has no choice but to trust Maddox and escape to the United States. Shockingly, Cameron realizes Maddox has been telling the truth all along when she’s introduced to her father, a man she barely remembers. Suddenly, Cameron has everything she has always wanted…a family and home. But as her powers are exploited by the very people she trusts, Cameron realizes the old adage is only too true…be careful what you wish for.  (Goodreads summary)

Several months after waking up from her “coma,” Cameron and her grandmother have settled into a life more normal than Cam can ever remember having. But when a familiar face shows up at her grandmother’s beach-side cafe, promising to take her to her father – her previously thought dead father – Cameron’s illusion of safety and normalcy is shattered. Triggered by the face of the handsome stranger and his outrageous claims, long lost memories begin to resurface, and her patchy recollections might be all she has with which to protect both herself and her heart from those who would use her for their own purposes.

One of the reasons I enjoyed The Mind Readers as much as I did – besides the building romance between Cameron & Lewis – is how unsettled I felt while reading the book. Behind the bright and alluring facade of the mind readers’ world and the convincing rhetoric that’s being pushed at Cameron constantly, there’s an undercurrent of unease and distrust that prevails over all the attractive trappings. In The Mind Thieves, Brighton takes these feelings she’s engendered and makes them even more pervasive than they were in the first book, creating an atmosphere that exposes just how trapped Cameron is in the mind reader world – just how backed into a corner, how monitored she is. There’s also a profound sense of moral ambiguity that surrounds Cameron’s circumstances, which adds an extra level of interest. For me, a story always tends to be more compelling when there are shades of gray, and let’s just say this world is all sorts of interesting. Brighton just did a fantastic job at heightening the tension, and I’m extremely intrigued by how it will all end up playing out.

In The Mind Thieves, Cameron finds herself a much desired entity among several groups – groups that will stop short of nothing to have her. Caught in the middle of this struggle that she doesn’t remember within a world with which she’s not familiar and that she’s been protected from for so very long, Cameron has very little knowledge of how to navigate the politics and circumstances in which she finds herself. She doesn’t know who to trust, she’s alone, and a bit adrift. In the midst of all this outer and inner turmoil she’s embroiled in, she’s slowly regaining the memories that were stolen from her. Cameron does have good instincts about people, but her reclaimed memories give her an advantage, provide her with a purpose, give her a healthy skepticism about people and their motives, and help protect her in an environment that is as unfamiliar as it is dangerous.

The growth that Cameron undergoes because of her experiences in The Mind Thieves is wonderful. Instead of her situation making Cameron merely seem the hapless, helpless victim, she instead grows stronger as a character. She’s already fed up with being treated as though she can’t handle the truth, of feeling “protected,” of being used, of putting her trust in people who abuse it. She’s had it, and she begins to do something about it. However, while she’s discerning, independent, and skeptical, that doesn’t mean things don’t throw her for a loop once in awhile. I love that her judgment, at times, is clouded by her heart – her vulnerabilities and susceptibility to understandable emotions make her character believable.  I think that, despite her experiences, Cameron is a person who really would like to give people the benefit of the doubt.  I really like where Brighton brings Cameron in this novel, and I’m really excited to see where her character development will go in the third book.

Overall, if you like stories in which your heroines or heroes get stuck in seemingly impossible situations; if you like when characters have depth and experience growth; if you like moral and ethical dilemmas; if you like intrigue, action, mystery and romance… then pick up The Mind Readers series by Lori Brighton. 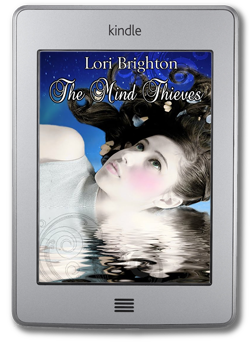