Since she’d been on the outside, she’d survived an Aether storm, she’d had a knife held to her throat, and she’d seen men murdered. This was worse.

Exiled from her home, the enclosed city of Reverie, Aria knows her chances of surviving in the outer wasteland – known as The Death Shop – are slim. If the cannibals don’t get her, the violent, electrified energy storms will. She’s been taught that the very air she breathes can kill her. Then Aria meets an Outsider named Perry. He’s wild – a savage – and her only hope of staying alive.

A hunter for his tribe in a merciless landscape, Perry views Aria as sheltered and fragile – everything he would expect from a Dweller. But he needs Aria’s help too; she alone holds the key to his redemption. Opposites in nearly every way, Aria and Perry must accept each other to survive. Their unlikely alliance forges a bond that will determine the fate of all who live under the never sky. (Goodreads summary)

Under the Never Sky is a dramatically captivating and unique dystopia. Rossi is an artist, weaving a complex world and a plot that leaves you with many unanswered questions. The wonderfully fulfilling conclusion leaves you hanging on for more.

The first thing that struck me was Rossi’s world-building. The world of Under the Never Sky is incredibly complex with a lot of sci-fi. This would usually leave room for a lot of holes and incongruity, however Rossi’s world is flawless.

To POV shifts between the main characters, Perry and Aria, which is always a risky move and yet Rossi does a beautiful job giving each a distinct voice and a very unique perspective. Their POV’s help to build the world and also leave the reader with a sense of only seeing half the story at a time. This adds a enthralling sense of mystery to the characters and plot.

The plot is very tight and well planned. I finished with a feeling of completeness to the story yet with the yearning for more. The complexity of the world explodes at the end and I wondered if Rossi would leave me hanging with an ending that was entirely unsatisfying but she came through. It was beautifully done and wrapped things up nicely. Don’t get me wrong, it’s not over and things are still messy but it was a conclusion to this first chapter of the trilogy that I could accept.

Now, I’ll warn you, it took a little effort for me to get into because I am not much of a sci-fi gal. However, Rossi won me over and I did enjoy the book immensely. Also, I couldn’t help feeling that the characters kept me at arms length for the first 3/4 of the book. The romance was a little forced when it finally came to a head. I just couldn’t buy the way it finally happened. It needed more…I don’t know…words? More build-up? More hints? But after that the last 1/4 of the book had me aching for the characters and really connecting with them and totally loving the love story.

Overall, Under the Never Sky was a really awesome read, a great set up for the rest of the story and I will look forward to the next in this wonderful new series. 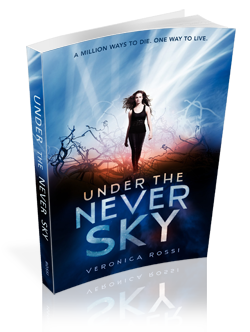 Title: Under the Never Sky

Series: Under the Never Sky (Book #1)