Being connected to Daemon Black sucks…

Daemon’s determined to prove what he feels for me is more than a product of our bizarre connection. I’ve sworn him off even though he’s running more hot than cold these days. But against all common sense, I’m falling for him. Hard.

The Department of Defense is here. If they ever find out what Daemon can do and that we’re linked, I’m a goner. So is he. And when a new boy shows up a school with a secret of his own, things get complicated fast. I need to choose between my own instincts and Daemon’s.

But then everything changes…

I’ve seen someone who shouldn’t be alive. Daemon’s never going to stop searching until gets the truth. What happened to his brother? Who betrayed him? And what does the DOD want from them—from me?

No one is who they seem. And not everyone will survive the lies.  (Goodreads summary)

I had an epiphany a few weeks ago. And even though some of you may be taking a moment to groan into your hands, I’m going to share it with you… the Lux series has become my all-time favorite.

I’m not exactly sure when it happened, as a certain universe full of Shadowhunters and Downworlders had previously occupied that top spot for years. But when I realized that I would giveaway my firstborn… camera (I have kids, and I’m sorry, but I rather like them just a smidge more than books… most of the time anyway <wink>) to get my hands on a copy of Onyx or Opal over those other series’ upcoming advance releases, AND when I finally admitted to myself how many times I’d reread/skimmed Obsidian in the months since reading it for the first time, it was rather obvious to me that Katy & Daemon make my bookish world go ’round.

And why is this? I muse to myself.

Daemon. At the end of Obsidian, Daemon was issued a challenge by Katy – he can’t give her what she’s looking for, a love like her parents’. Never one to back down, Daemon is determined to prove Katy’s assessment of him — and them — wrong. In Obsidian, Armentrout gives the reader snap shots of who Daemon truly is in the few moments he drops his guard. In the multiple extra POV scenes that have been released in Obsidian’s wake, Daemon’s character has been revealed even more. And now, with a more complete picture of the complexity that is Daemon Black, comes Onyx. He’s more genuine, he’s nicer… he has moments of shocking sweetness that may leave one’s mouth agape. Oh don’t worry, our favorite “bad boy” hasn’t morphed into some kind of whipped, lovesick puppy. He’s still Daemon, still has that singular ability to get under Katy’s skin, still loves to fluster and unsettle her for kicks, but his teasing has lost that biting edge of cruelty that was sometimes so frustratingly prevalent in Obsidian. He surprised me in this book. And looking back, I’m not sure why, as the clues have always been there. Let’s just say that after Obsidian, I was more or less infatuated with Daemon. After Onyx, I fell completely in love with his character for his character.

Katy. Not to be outdone, Katy undergoes some hard-earned development in Onyx as well. The connection, her confused feelings regarding Daemon, the ever-looming threat of the DOD means Katy has a lot on her plate. As the story progresses, as Katy discovers more about the connection and senses the level of danger rising all about them, she’s forced to make some tough judgment calls to keep those she cares for safe. Some of these decisions have weighty consequences. Some are made against the advice of those she cares about. But always her intentions are good. Unfortunately, intention hardly ever dictates outcome. Because of this, Katy goes through the fire in Onyx, and Armentrout forges her character in wonderfully heartbreaking, fundamentally crucial ways.

Daemon & Katy. Convinced that Daemon’s increased attentiveness has everything to do with their freaky, new alien connection or the fact that he’s been challenged and only interested in the chase-and-conquer, Katy’s not willing to believe that Daemon is truly interested in anything real with her. But as their interactions begin changing to something more genuine, she’s forced to wonder if maybe he’s the real deal. There’s still an intense physical attraction between Katy & Daemon, but thing that makes this book so truly lovely is watching them connect on a deeper, emotional level. Let me assure you that as Daemon gives Katy a chance to know the guy beneath the hardened facade, that some of these unabashedly sweet moments are just as toe-curling and squeal-inducing as the infamous “Laptop Scene.” By the same token, the moments that aren’t so sweet are defining their connection to one another as well, and it’s these moments more than any other that prove the true mettle of their feelings for one another.  It’s such a natural progression of their relationship. The dynamic is decidedly different, evolving and reflecting the more serious tone of the book.

Story. Speaking of that aforementioned seriousness, let’s talk about the story. While Obsidian had more of a simple plot and a larger focus on character development, Onyx balances both beautifully. With an increased, more vigilant DOD presence, weird side effects of the connection that Katy can’t control, a mysterious new boy who may know more than he’s saying, and a glimpse of someone long dead, things in this small West Virginia town are getting a lot more dangerous and the threat of discovery more real than ever before. Just as Armentrout masterfully weaves romantic tension, she is also expertly spinning her plot slowly throughout Onyx, creating an interconnected web of manipulation, disastrous consequences, impossible situations and hidden truths. Amping up the tension to wonderful heights, she creates circumstances I just couldn’t see a way out of and gives a much starker view of the reality of the Luxen’s DOD-controlled existence. It evokes wonderful emotional responses, it’s tight and well done, it’s just really good storytelling.

Overall, words cannot adequately describe how much I love this book, so I’ll just inadequately say that Onyx was everything I hoped it would be and infinitely more. 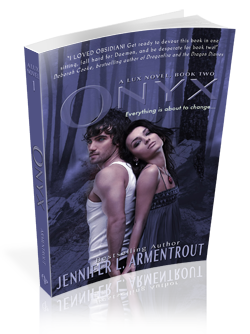 So that you’re all caught up for the release of Onyx, I’m giving away ONE (1) paperback copy of Obsidian to ONE (1) lucky follower!

Check back tomorrow for Heather’s review of Onyx & a giveaway of Shadows!!!