For centuries, the world outside the Biome has been unlivable. Today, marks the first time anyone will attempt to leave the suffocating ecosphere. Eria is not worried because her scientist father has successfully tested the new Bio-Suit many times. It’s a celebratory day until something goes horribly wrong. In the midst of tragedy, Eria uncovers a deep conspiracy that affects the very air she breathes.

If those responsible find out what she knows, they won’t stop hunting her until she takes her last breath. (Goodreads summary)

Both a prison and salvation, the Biome has allowed the continued survival of mankind for centuries on an Earth that’s grown hostile, deadly and barren. However, Eria’s father, a brilliant scientist, has been working on a project that’ll let human begin moving beyond the Biome. It’s a project that promises hope, but that instead delivers catastrophe. In a single moment, Eria’s life alters forever, exposing the dark underbelly of her perfect, snow-globe world and revealing secrets that’ll challenge her perception of reality and put her life in danger.

Eria Stevenson dreams of a day when she’ll escape the Biome – to feel the sun on her face and the wind in her hair. At the outset, there’s nothing extraordinarily remarkable about Eria. She’s a normal teenager with a great sense of humor who can’t cook, hates her hair, and who’s nursing a longtime crush on her dad’s lab assistant/childhood friend, Ash. All in all, pretty relatable. I wouldn’t call her a kick-butt kind of girl, but more of a dreamer who shares her dad’s vision of the future. However, because of certain events and situations that arise, Eri is about to undergo an unavoidable change, a loss of innocence, and I’m extremely excited to see where Johannes will take her character in this series.

While an extremely fast read, Suffocate packs a lot of punch into its short page count. Eria’s world, though a bit vague, is detailed enough to satisfy, with sci-fi overtones and dystopian undertones. Even more impressive is how well Johannes develops her cast of characters with such limited page time – I was surprised how emotionally invested I found myself, considering I had literally just met these characters. The pacing was also very well done. Pacing is of utter importance in a novel of normal length, but it’s paramount in a novelette – not a word or moment wasted. There’s no time to wander or stray, and Johannes doesn’t disappoint here either. After a short introduction to the characters and the world, you are immediately thrown in the action and it doesn’t let up at all, right until the fantastic ending that left me staring at my Kindle saying, “WHAT?!” Which brings me to another aspect of Johannes’ stories that I’ve discovered in the two I’ve read so far: She’s willing to take risks with her story. I admire when an author is willing to do that which is necessary for the sake of the plot or the characters, and I absolutely love when an author manages to catch me off guard.

Overall, an exciting introduction to The Breathless series, Suffocate delivers an action-packed plot full of unexpected twists, an interesting and dangerous world, and a cast of characters that hold wonderful emotional resonance. 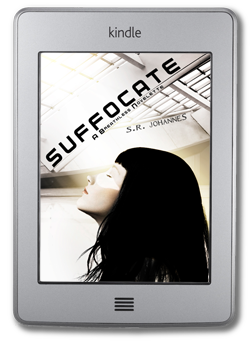 Enter to win an ebook of Suffocate HERE!