Protecting humans from dangerous magical creatures is all in a day’s work for a faerie training to be a guardian. Seventeen-year-old Violet Fairdale knows this better than anyone—she’s about to become the best guardian the Guild has seen in years. That is, until one of her assignments—a human boy who shouldn’t even be able to see her—follows her into the fae realm. Now she’s broken Guild Law, a crime that could lead to her expulsion.

The last thing Vi wants to do is spend any more time with the boy who got her into this mess, but the Guild requires that she return Nate to his home and make him forget everything he’s discovered of the fae realm. Easy, right? But Nate and Vi are about to land themselves in even bigger trouble—and it’ll take all Vi’s training to get them out alive.  (Goodreads summary)

A novelette and yet a complete story, this first installment shoves you right into the world of Creepy Hollow, the Guild, the fae and deadly, long kept secrets. Violet Fairdale is a guardian in training. At the top of her class and uniquely gifted, she promises to be unparalleled. Her mission: to protect the human world from mischievous and malicious fair folk, and to keep the humans blissfully ignorant of the magical world that exists just under their noses. And then… one of her assignments goes terribly wrong when her “assignment” follows her through the faerie doorway back to Creepy Hollow, endangering her coveted top position as a guardian trainee and threatening her with expulsion from the Guild. And yet, despite her annoyance with the human who trailed her home, she discovers that perhaps there’s more to him than she originally thought.

Violet isn’t exactly what you might call warm and cuddly. Orphaned, obsessed with earning the highest honors possible in her training, gifted with a singular power, she’s emotionally closed-off from those around her. She’s sarcastic, a bit aggressive, but she’s not completely prickly or made of stone. Once she meets Nate – optimistic, sweet, inquisitive Nate – she’s beginning to realize that she’s lonely… and maybe she doesn’t want to be. The story is told entirely from Vi’s first person point-of-view, giving the reader a look into who she really is, exposing the vulnerabilities, doubts and weaknesses that make her more human… or perhaps relatable would be a better word since she’s actually a faerie.

Nate is in a word, adorable. Once Violet, and he, realize Nate can see through her glamour, he barely misses a beat. Instead of freaking out that reality as he knows it has completely changed, he takes it all in stride, plying Violet with questions about how her world works rather than cowering in a corner. His enthusiasm is infectious. His inquisitiveness is cute, and yet he does comprehend the seriousness of the situation. He’s an easygoing guy, quick-witted, intelligent and kind– the perfect match for Violet’s personality.

The story itself is fast-paced and gripping. For such a short length, a lot is introduced or foreshadowed in this first novelette. It’s impressive how much information the author manages to impart to the reader in Guardian, while never feeling forced or like an information dump. I’m not usually one for stories of the fae, but your typical faeries, these aren’t. I love Morgan’s addition of the Guild to faerie lore and the presentation of the fae in general. The world is simultaneously explained just enough while also being just vague enough but holding a lot of potential darkness and a lot of promise for future world building. There are also elements of Nate and Violet’s individual backgrounds that Morgan just briefly touches on that will hopefully become bigger issues in subsequent stories. The plot and revelations are very well-paced and while satisfied upon reaching the ending, there are a lot of questions Morgan left unanswered that have me excited to start the next novelette, Labyrinth.

Overall, with a reimagined world of faerie, two wonderful main characters, a hint of romance,  a story that sucks you right in, and the foreshadowing of all that’s to come, Guardian is a fantastic introduction to the Creepy Hollow series. 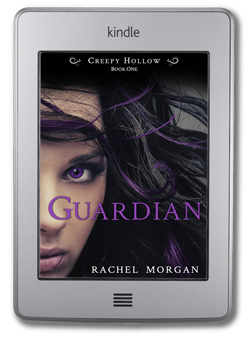