ABIGAIL SHELTON IS DEAD
Spring Valley’s golden girl is found floating face-down in her boyfriend’s pool, hands bound behind her back, head bleeding, drugs and alcohol in her system. Her friends are the only suspects—and they all have reasons to want her dead. Everyone has an alibi, but no one is innocent.

ALIBI is a 4-part young adult e-book series. Each one-hundred page installment reveals the perspective of a different character: the secret love, the nemesis, the boyfriend, the best friend. As their tales unfold, we learn that Abby is not as perfect as everyone believes, but she’s not the only one with secrets to hide. This page-turning tale of suspense, betrayal, murder, and lust will keep fans of Gossip Girl and Pretty Little Liars up and reading well past curfew.  (Goodreads summary)

With a distinct vibe that, as promised, channels Pretty Little Liars, Gossip Girls and even Veronica Mars, Charles tells one side of the story leading up to the night of Abigail Shelton’s death. Found dead in her boyfriend’s pool, the story unraveling from those involved paints an interesting picture of who Abby was and who those closest to her were – the secrets, lies, betrayals, and motives of each. Told as one story through four different novellas through the voices of four different authors, Twist Literary’s Alibi promises to be quite original in concept and presentation. And indeed this first novella, Charles, is darkly intriguing, gripping, sexy, smart, and fast-paced as it jumps between pre-murder flashbacks and post-murder present day.

Charles himself, an Australian transplant living with his American extended family, is haunted, deeply flawed, incredibly jaded and quite worldly for his seventeen or eighteen years. In fact, all of the teenagers that make up this story are pretty damaged, growing up in the lap of luxury, but left to their own devices creating a long-lost loss of innocence and a void of parental support that’s left each them to essentially raise themselves and stuck in emotional survival mode.  Always looking out for number one, social interactions are not about meaningful emotional connection, but rather an opportunity for gratification, a chance to dominate or use others, an opportunity to get ahead. It’d be hard to like or even care for characters like this, and really in a story such as this, liking such morally ambiguous characters is beside the point, yet Miles, in this first installation, infuses Charles with a compelling vulnerability, pangs of conscience, glimpses of a guy who underneath all the casual flings and flirtatious games might truly long for a genuine connection with someone. It makes his character sympathetic and tentatively likable, even while his secrets and history invite suspicion.

Overall, with twists and turns, fantastically murky characters, and wealth of intrigue, Twist Literary’s novella Charles is the beginning of a fresh murder mystery told in a wonderfully original way for a new adult audience.

* Due to mature themes and situations, I’d recommend this series for an upper YA audience. 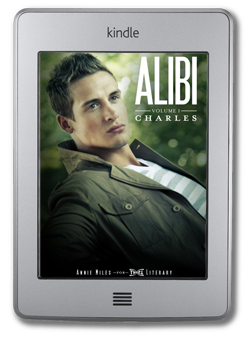