Enter a world of fierce wolves, stunning magic and romance…

Swept into the world of the Daylight Coven, Caia is caught between her loyalty to the Daylights and her new insight into the hearts of the Midnights. As more obstacles are thrown in her and Lucien’s way, Caia is pushed further adrift from him and Pack Errante. With no one to turn to, Caia has to make the most difficult choice of all…

Who does she truly belong with? The Daylights or the Midnights?  (Goodreads summary)

Of all Samantha Young’s series that I’ve read so far, I have to say that The Tale of Lunarmorte is probably my favorite… which I find somewhat ironically hilarious since, in general, I just don’t really get the whole werewolf thing. The mythology behind this series, though, is original and absolutely fascinating — the magic, the rules, the society, the politics, the prejudices. It’s just all very well fleshed out and presented. Little hint… it involves Greek gods and the origins of all supernatural races.

Caia, the book’s main protagonist, is fantastic, as is her development from the sweet, naive, shy girl she was in Moon Spell to the empowered, confident, intuitive, mature (yet still sweet) young woman she’s becoming in River Cast. Her progression is dramatic, yet in light of her experiences and circumstances, organic and believable. She’s tough, and getting tougher as she wrestles with the reality of being the lynchpin in an ages old war between the Daylight and Midnight races. Yet through all the horror and injustice she’s witnessed since coming out of hiding, she’s managed to retain the vulnerable, compassionate side that makes her so utterly likable.

One thing I’ve come to love about Samantha’s books is that all her heroines and heroes are distinctive. They are all unique and the players and dynamics don’t seem like carbon copies from series to series. Every story, every character and every relationship has it’s own individuality and evolution. It may seem like a obvious, “Well, duh!” kind of thing to point out, but in my opinion, it’s a tougher skill to master than you might think. Solid, unique character building and relationship development is probably the biggest selling point a book has, and losing myself in a Samantha Young novel has quickly become my current, favorite obsession because of her ability to create captivating casts of characters.

Also featured in River Cast, is Jaeden. Another wolf from Pack Errante and Caia’s first friend upon rejoining the pack, Jaeden snuck her way into my heart in Moon Spell, so I love the addition of her perspective in this novel. Jaeden’s storyline is used brilliantly, for not only does it advance the larger plot, but Samantha uses Jaeden’s point-of-view to fill some voids that are left in the wake of Caia’s circumstances and  storyline.

The romance in River Cast, and indeed in Moon Spell as well, drove me crazy… in a good way. I do enjoy a good angst-ridden romance every now and again. And, wow, it can be a bit angsty. Moon Spell and River Cast both had me gripping my Kindle, white-knuckled, wanting knock our two main characters’ heads together in the hopes that either these crazy kids would work it out, or that, getting their heads in such close proximity, they’d accidentally kiss. Either one would have been good with me. But they’re stubborn, prideful and each have their individual reasons for their ridiculously tormenting, angsty ways. So yes, it’s slightly torturous, but as I said, it’s the enjoyable kind.

And do they kiss and live happily ever after with sunsets, picnics, rainbows and unicorns?

Well, maybe not the unicorns, but read the book and find out for yourself.

The overall storyline of River Cast – Caia’s introduction to the Daylight’s Center, the evolution of her incredible abilities, her doubts about the ideology behind the war between the Daylights and the Midnights, maneuvering around those she doesn’t entirely trust– has been amped up. I wouldn’t say that Moon Spell was slowly paced, not at all, but where that book had to lay the groundwork for the world and characters, River Cast was free to take off at break neck speed and it rarely gives you a chance to catch your breath. In River Cast, Caia is, essentially, thrown into the dangerous open water of the magiks’ world – an ocean, she’s realizing, with a treacherous and deadly political undertow that could suck her, and all those she cares about, under. The stakes are clearly higher and Caia’s beginning to understand what her place in the larger picture is. She’s facing off against age, experience, prejudice, fear, false allies, and betrayal. It’s not a world she was bred to, and she’s still learning to play the game, but it’s one she must master if she hopes to put an end to the war.

Overall, with an agonizingly wonderful romance, a fast-paced plot, plenty of intrigue, an interesting mythology and fantastically developed characters, Samantha Young has convinced me that perhaps, for the first time, I do get this werewolf thing after all. 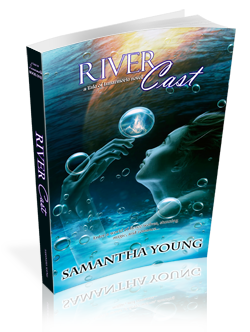