For the last two years Ari’s life has been anything but normal and on her 18th birthday, when her friends surprise her with a gimmick genie claiming to grant wishes, Ari discovers the truth. The tragic and strange occurrences surrounding her 16th birthday were not coincidental and her life is never going to be the same again.

They are Smokeless Fire.

They are Jinn.  (Goodreads summary)

I’ve read a lot of different books about a variety of mythical creatures, but never much about the jinn.  After reading Smokeless Fire, I’m really wondering why that is. Poking around on Wikipedia, the whole Middle Eastern/Mesopotamian mythology that lies at the foundation of this series is fascinating, rich with wonderful depth and possibility for a myriad of stories. In the Fire Spirits series, Samantha Young has imaginatively and successfully taken advantage of this particular void in the YA paranormal world.  She has taken jinn lore and has created a fabulously dark, vivid, original world — steeped in the widely-accepted mythological foundations but while also  one that’s uniquely her own — and filled it with magic, treachery, endless political machinations, ancient beings, good, evil and all shades of gray.

Abandoned by her mother, estranged from her absentee, workaholic father, pushed away by her best friend and first love, and uncertain of her future following her impending high school graduation, Ari Johnson feels alone and lost. However, Ari’s no wilting flower or Mary Sue.  She’s strong. She’s not a pity party kind of girl and she begins to be pro-active about righting the relationship wrongs in her life. She’s likeable, practical, insightful, doesn’t shy from confrontation, and is intelligent… except, perhaps, when it comes to Charlie.

Her childhood best friend, Ari and Charlie have always been there for each other… except for when he wasn’t. Except for that day two years ago, when his younger brother was killed in a car accident, effectively killing the Charlie she knew along with him. Gone is the sweet, happy boy she fell in love with. Instead he’s been replaced by a boy who drinks and drugs away his sorrows, a boy who’s purposefully distanced himself from her, a boy who’s broken her heart too many times to count. A boy she’s determined to save from himself even if he doesn’t want saving.

And then on her 18th birthday, Ari stumbles upon her true heritage, discovers she has a supernatural protector, and learns she has an unsettling destiny. Because of who and what she is, there are those who would use her as a pawn in play for power, those who would use her merely to prove a point, and those whose agendas aren’t quite yet clear. As a new world, new possibilities and new dangers open up before Ari’s eyes, she’s uncertain who to trust, with the exception of Jai, her jinn guardian. Despite his stoicism and acerbic demeanor, he has proven to Ari that he has her best interest at heart.

Plagued by family issues of his own, and not completely made of stone, Jai finds it all too easy to empathize with his new charge’s feelings of vulnerability and loneliness. And perhaps, more than he should. With his sense of honor, his confidence, his slightly damaged side, his compassion, his strength of will, his ability to control a situation, his dry sense of humor, Young has written a completely swoon-worthy book boy in the character of Jai Bitar. It’s easy to see why Ari begins to finds him intriguing.

So… yes, to answer the burning question. There is a love triangle of sorts between Ari and the boy she’s always  loved, and Ari and the guardian whose soul understands hers. I’ve always loved romances between best friends and between protector/protectee, and in Smokeless Fire, I’ve been given the best of both worlds, so to speak. To me, though, there’s only one clear contender for Ari’s heart… the other is merely a foil, albeit an emotionally gut-wrenching one. It’s conflicting, sad, exhilarating, and built at a wonderfully painful pace… (Romantic tension, meet machete. Holy Macaroons.) and it is one of the reasons, I’m going to start Scorched Skies, the sequel, as soon as I’m done writing this review. 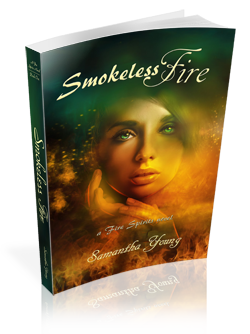