For thirty-five girls, the Selection is the chance of a lifetime. The opportunity to escape the life laid out for them since birth. To be swept up in a world of glittering gowns and priceless jewels. To live in the palace and compete for the heart of the gorgeous Prince Maxon.

But for America Singer, being Selected is a nightmare. It means turning her back on her secret love with Aspen, who is a caste below her. Leaving her home to enter a fierce competition for a crown she doesn’t want. Living in a palace that is constantly threatened by violent rebel attacks.

Then America meets Prince Maxon. Gradually, she starts to question all the plans she’s made for herself- and realizes that the life she’s always dreamed of may not compare to a future she never imagined. (Goodreads summary)

The Selection is a beautiful story of love left behind and discovered. The world Cass spins for us is one where the future has arrived after WWIII. The young country of Illea is struggling to hold on to newborn roots planted in ashes of the remains of the USA. An eight-caste social system has been established, and here we meet America Singer, a member of a median caste. After getting to know her quirky, talented family, we also meet America’s forbidden love interest. Something that really struck me was the normalcy and believability of each of Cass’s character, not only at the beginning, but throughout the entirety of the story. Not once did I meet a character and think to myself: that’s not possible, or, no one really acts like that.

Despite her personal aversion to applying, America is convinced to enter for the chance to become a participant in the Selection, a nation-wide, televised dating program for the country’s most eligible bachelor: Prince Maxon. America leaves her home, where her life has been planned for her, and she enters the unknown to begin a personal transformation. (Enter love triangle here.) She has moments of independence, and she seriously needs to learn to make up her mind, but what teenager thrust into the midst of the total unknown isn’t going to be a little flaky and/or fickle? As the story began to delve into the “Selection” process, I felt more strongly about my “dislike” for a certain character than I did for my “like” of others. I hope for more character development in the sequel, as I think even our heroine, America, has more to give.

In a nutshell, I would call it a combination of Esther (the book of the Bible), The Bachelor (the TV show), and maybe an underlying vibe from The Hunger Games (or your personal favorite dystopian tale) and maybe just a dash of Cinderella.

This being the first book of a series, prepare for an unresolved ending. I am eagerly awaiting the next installment in 2013.

To decide if this book is for you, read the first 5 chapters HERE. 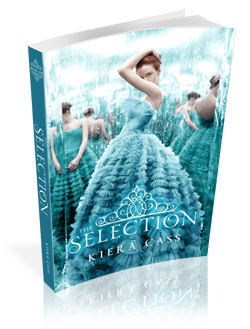