One choice can transform you—or it can destroy you. But every choice has consequences, and as unrest surges in the factions all around her, Tris Prior must continue trying to save those she loves—and herself—while grappling with haunting questions of grief and forgiveness, identity and loyalty, politics and love.

Tris’s initiation day should have been marked by celebration and victory with her chosen faction; instead, the day ended with unspeakable horrors. War now looms as conflict between the factions and their ideologies grows. And in times of war, sides must be chosen, secrets will emerge, and choices will become even more irrevocable—and even more powerful. Transformed by her own decisions but also by haunting grief and guilt, radical new discoveries, and shifting relationships, Tris must fully embrace her Divergence, even if she does not know what she may lose by doing so.  (Goodreads summary)

Disclaimer: If you have not read Divergent this review may contain spoilers.  Proceed with caution.

My thoughts on Insurgent: OH MY GOSH!!! Basically, take every prediction you had at the end of Divergent and throw it away. Veronica Roth’s second installment of this series is completely mind-blowing and delectable. Without hesitation, one of my top 5 books of 2012 and the year is not even half over yet. I received the book from Amazon the day it came out and read the entire 525 pages that evening. It is unputdownable. “Why?” you ask. What a great question. Good job, you! Well…

Roth drops you back into the story right where Divergent leaves off, so there is no lag time at all. You are set down right into the plot, characters, action, etc. Even though the book is 525 pages, I was never bored. Not one single time. A lot of long books are long because of poor editing or rambling authors, however Roth loads every sentence, paragraph, and page with action, drama, and plot development. Nothing is wasted. It in no way falls into the notoriously bad/mediocre “middle book syndrome.”

The realism of her story is incredible. Tris is burdened with incredible amounts of guilt and grief from the events at the end of Divergent and though she realizes she has all of these emotions, she is not dealing with them. Therefore, she is practically debilitated because of it. Roth does not sugarcoat this or make it easy on Tris. It effects every relationship she has, including her relationship with Four. Her relationship with Four is also not the primary focus of this novel, so there wasn’t as much of it as I would hope but the parts that were there were completely perfect. They fit into their characters and were real. That is what grabbed me the most about Tris and Four/Tobias. They have an incredibly real connection. That said, I’m hoping for more Tris and Tobias in book 3 but it was kind of nice to have it be more about the action than the romance.

Tobias is every thing we loved in the first book and then some. He is strong yet vulnerable. Loving, selfless, and kind though he doesn’t see himself as such. I love that he doesn’t cut Tris any slack. He expects her to be who she is capable of being.

Be prepared for twists and turns you will never expect. The characters continue to develop and we see more of the other factions: Amity, Candor, and Erudite. It’s amazing to see how complex and well-developed Roth’s world is. Her integration of the religion of this world is really interesting. She also calls into question people’s motivations and ideologies. She forces you to ask a lot of really deep questions and I love that.

There are some really interesting new characters developed as well and Tris grows so much in this novel, really becoming someone that can stand on her convictions and be the person she is meant to be. No matter the cost. I absolutely adored Roth’s attention to detail and pacing. There is never a dull moment. So many times while reading I had to close the book and take deep cleansing breaths and remind myself to “be brave.”

In short, Insurgent is a masterfully woven and incredibly enthralling read. A completely delicious sequel! Stop now, and pick up this book. Four is waiting. 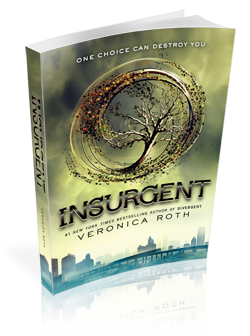 Published: May 1st 2012 by HarperTeen