The Ghost
I’ve been trapped in the body of Lily “Ally” Turner for a month now. Talk about a fashion crisis on an epic scale. What worries me more, though, is sometimes I catch Will looking at me like he thinks I’m Lily…or that he wishes I were. Without the good looks of my former self, I don’t know who I am, or if who that is is good enough. I need out of this mess. Now.

Will and I have been looking for a solution, one that would separate me from Lily without killing her. But it’s not going well. Then, when it seems like things couldn’t get any worse, we run into Misty, my former best friend and boyfriend-stealer extraordinaire, who claims she’s being haunted…by me. Seriously?

The Goth
I’ll admit it. It’s really weird to look at Alona but see Lily. I do know the difference, though, contrary to what Alona might be saying. And Alona is more than a pretty face to me, not that she would believe that.

Our one lead for some help in this messed up situation might be a page torn from the yellow pages-—the “Psychics” section-—I found in my dad’s stuff. One of the “fakes” seems a bit more real-—and odd-—than the others. Before I can investigate further, though, Alona is off and chasing a ghost that’s probably nothing more than a figment of Misty’s guilty imagination. Now Lily’s family is freaking out because she didn’t come home, my mom is ordering me to stay out of it, and something is definitely wrong with the person formerly known as Lily “Ally” Turner…(Goodreads summary)

*** If you have not yet read The Ghost & The Goth or Queen of the Dead, there be slight spoilerishness ahead. ***

Final books in a series are always accompanied by such conflicting emotions, are they not? On the one hand, there’s excitement in the resolution, a satisfaction in a story well ended. On the other hand, it’s ended. Your brief glimpse, your privileged status of observer and confidante has been revoked, the characters to whom you’ve grown so attached moving on with their lives off-page. So it is with a heavy, yet satisfied heart that I say farewell to Will, Alona, and one of my favorite series… that is, until I re-read it of course.

When we last left Will & Alona, they’d had a rather big and divisive confrontation with the Order, Alona had inadvertently gotten herself stuck inside Lily Turner’s body, more or less permanently, and the Turners believed that their unconscious daughter had miraculously recovered from her year-long coma. Alona is now saddled with a body that she finds less than ideal, with a life and a family that are definitely not hers. Alona inside a corporeal body also means that Will has lost his spirit guide and is, once again, at the mercy of the mass of spirits clamoring for his help… not to mention the utter weirdness of seeing Alona inside his former best friend’s body. The goal then becomes to separate Alona & Lily from one another, the outcome of which is yet unknown as both girls could finally both be gone for good. When a new player arrives on the scene forcing an unexpected solution to Will & Alona’s Lily problem, the old adage of “Be careful what you wish for.” takes on a whole new meaning.

In high school, Will’s ghost talking abilities were a curse, his dad’s suicide ensuring that Will would never learn the extent of his powers or how to manage them on a daily basis. He lived in dread of being committed to a psych ward for his “delusions,” of spirits finding out about his ability, of the violence and harassment that might ensue if they discovered what he could do for them. He became good at hiding from his life behind a pair of earbuds —  avoidance and acquiescence becoming the name of the game.

And then along came Alona Dare. His untouchable, fantasy girl in life, his somewhat annoying, unexpected salvation in death. Alona claimed Will as her ghost-talker, became his spirit guide and authoritatively kept the restless dead at bay. Will finally was achieving a level of quasi-normal, and life didn’t seem quite so bleak anymore, even if it came at the cost of his high school’s irritating former teen queen being an almost constant companion. And then Alona gets accidentally sucked into the spiritless body of Will’s former and comatose best friend Lily, effectively making Alona human again and dampening her spirit guide abilities.

In Body & Soul, Will’s character takes a turn for the decidedly more self-reliant.  His spirit guide unavailable to perform her duties as intermediary and referee, he is forced to learn to navigate the spirit world without her help. Will is far from being a weak character, but he’s not what you might call naturally assertive. Conflict, the kind Alona seems to thrive on, is not his preferred course of action. However, with everything that’s happened to him since acquiring Alona as his spirit guide, he’s grown tired of being pushed around by various parties. Uncomfortable with just how much he depends on Alona as a buffer as well as for her boldness and tenacity, he begins to stand up for himself more readily — taking the initiative, acting with confidence, putting his foot down and taking control. But as much as Alona has been a crutch, she’s also consciously encouraged this change in him and for the better.  Will begins to embrace his abilities as a ghost-talker, rather than to merely view them as a gigantic inconvenience he must deal with daily.

Will is not the only one who’s undergone significant changes since The Ghost & the Goth. Just as Alona’s assertiveness has pushed Will to be more take charge, Will’s thoughtfulness for others has rubbed off on Alona. Oh, she’s still Alona, with her deliciously snarky asides and brutally honest opinions.  But in Body & Soul, she’s more likely to take others into account before she opens her mouth, and more likely to exercise restraint… even when she really, really doesn’t want to. Being integrated into the Turner family has also done a lot to make her realize the consequences her choices have led to. Lily has a family who truly loves her and is incredibly thankful she’s back in their lives after a year of fearfully mourning that she may never awake up. Alona, still struggling with the knowledge that her death barely caused a blip on her family and friends’ radar, finds the attention unsettling while also coming to the realization that this is kind of familial love she’s always longed to be a part of. However, she’s Alona, and not Lily, and she also wrestles with the fear of losing who she is, the exhaustion of pretending to be someone she’s not, of treading somewhat lightly around Will, who she feels can no longer differentiate between her and Lily. When she looks in the mirror, she doesn’t see herself, and she’s trying to figure out what’s left of her after all the superficial things she’s depended upon for so long, are stripped away.  Alona’s ice queen act has been gradually melting since The Ghost & The Goth, and while she’s still the strong, confident Alona I’ve come to know and love, the situation with Lily and the Turners exposes a more vulnerable side of her that’s extremely sympathetic.

One of the reasons I love this series is that it’s a different kind of romance. Kade has been building Will & Alona’s relationship at a slow burn since the beginning. They’re not proclaiming undying, eternal love. In fact, they rarely, if ever, discuss what they mean to each other. They obviously share an attraction to each other, but when it comes to the emotional side of their relationship, mum’s the word. Instead, the two dance around one another, each knowing that the other fills a void in their soul, each knowing they need the other – that life would be that much less if the other wasn’t in it – but never wanting to admit it aloud. It’s still passionate, their constant back-and-forth covering deeper feelings. It’s one part romance, two parts sparring match, and it’s toe-curlingly fantastic. In Body & Soul, though, they have the added complication of Lily, and Alona being unsure of whether Will sees her when he looks at Lily, or Lily his former best friend and crush.  They also have to face the very real possibility that if they are able to separate Lily and Alona from each other, that it may be the end for both girls… permanently. But even if both girls do survive somehow, the obstacles Will & Alona face for having a real future between the living and the dead may be insurmountable. Impossible as a future together seems though, things between Will & Alona are undeniably changing. It’s evident in their glances, their little gestures, their actions, the things they are finally willing to admit to themselves (if not to the other). For those of you who are eager to see some further relationship development between Will & Alona, you will not be disappointed.

The story itself is rather straightforward in that Will & Alona are trying to figure out a solution to their very weird, body-snatching problem. Without the Order and without any super specific direction from Will’s father’s notes from his days as a member of the Order, the two of them are pretty much out of their depth when it comes to separating body and soul. There’s a lot of tension that drives the story; tension between Will & Alona when it comes to what she should be or shouldn’t be doing in Lily’s body – if she’s only a living monument to who Lily was before the accident or if Alona  (and Lily, in a way) has truly been given a second chance at life. When another ghost, a borderline crazy one, takes advantage of the situation, creating a solution – albeit a far from ideal one – to the Will-Alona-Lily problem, the two of them must figure out how to undo it all before it’s too late to make it right. It’s a book full of hard decisions, some rather interesting curve-balls, and an ending that I wasn’t quite expecting, but loved. One of the things that I love about this series is that everything’s not always tied up neatly in a little bow.  It’s messy, it’s life, it’s human, and sometimes that means questionable decisions and unintentional collateral damage. 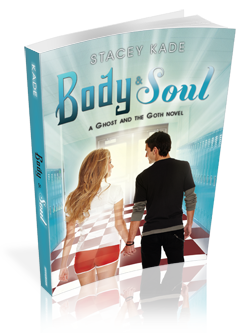