In a future Chicago, 16-year-old Beatrice Prior must choose among five predetermined factions to define her identity for the rest of her life, a decision made more difficult when she discovers that she is an anomaly who does not fit into any one group, and that the society she lives in is not perfect after all. (Goodreads summary)

Divergent is enthrallingly beautiful and absolutely captivating. Normally, I am not one to read a book twice. Yet, I read and re-read and discussed and speculated over this book more than just about any other book I’ve read. It is that good. Veronica Roth does an amazing job completely sucking you into the story and leaving you breathless and nail-biting until the last page.

World-building is a huge part of making/breaking a book for me, and Roth does this seamlessly. I was completely wrapped up in the story for days after finishing. The world is complete and complex yet Roth doesn’t get slowed down with the details; they are simply interspersed with the rest of the story. The factions are believable and interesting, though we really are only introduced fully to Dauntless and Abnegation with a touch of Erudite thrown in. Roth keeps a level of suspense and mystery which is simply delicious!

One of the things I love about YA lit is that it forces you to look at bigger issues without all the stupidness of adult literature…did I say that out loud. Here’s what I mean. YA lit causes you to ask important questions like “What do I believe about….?” “How do I feel about…?” “What would happen if…?” without leaving you hopelessly broken and bothered at the end. In Divergent, Roth causes the reader to ask serious philosophical questions such as, “What does it mean to be brave?”, “What is selflessness?”, “What does love look like?”, “Is is more important to aspire to one virtue or all of them?” Divergent gives no simple, trite answers to these questions. In fact, Roth doesn’t answer these questions at all. She asks the reader to seek the answers for himself along with the characters.

Speaking of characters, Roth’s characters are complexly and gradually built. You get tidbits about them, sprinkled throughout the story not paragraphs of descriptions. Hints of personality rather than flat out statements. This builds a realistic relationship between the reader and the characters. Even secondary characters are tied to the reader. No cardboard cutouts or one-dimensional props. Everyone mentioned is important to the story and not just another name or place holder.

I will only disect the two main characters and let you hash out the rest on your own. Tris, our leading lady, grows into an incredibly strong female lead which I love. I want to watch a character grow and learn and become a stronger version of himself/herself. She is a walking contradiction like most real people: fragile yet resilient, dense at times yet brilliant, frightened yet brave (which, I believe, actually are not contradictory), not pretty yet beautiful, selfish yet selfless. Four, sigh, what can I say about Four? He is complex, strong, intense, and at first a little brittle. I would describe him as “walled,” surrounded by four (no pun intented) walls he has built to keep people not at arm’s length but at no length at all. He lets no one in, except Tris. When his walls come down, it is beautifully done in a way that maintains his manliness and strength. Their interaction and relationship fits directly into the characters that Roth has set up.

The believability of the romance is also a key aspect of its fantasticness. There is no cheese-factor and is slowly and steadily built. It’s not based on the characters appreciation of one another’s mutual hotness, which is both refreshing and realistic. I don’t know about you but I don’t see a whole lot of stunningly perfect and beautiful people walking around. I see real people with real flaws and real beauty coming from something inside rather than perfection externally. The romance in Divergent exemplifies this. Tris and Four’s relationship is built on respect, common interests and philosophies, and also attraction to one another but it is built around the other factors not on attraction first. Furthermore, so often, we see a romance blossom and
the characters change into something they are not, yet Tris and Four maintain who they are throughout. They are complete equals, saving each other, supporting each other, and even fighting with one another. It’s not a codependence or a one-sided need. It is completion and fulfillment of each others flaws and phobias and failings. It is captivating.

Last but not least, I love the voice of this book. It is written from Tris’s POV and in an extremely real and revealing way. I can hear her in my head and that’s not always true. Many times I am jolted out of a story by something the characters say and in Divergent I was consumed. The voice Roth gives to Tris’s story is simply breath-taking.

In short, Divergent left me incredibly anxious for Book 2 Insurgent which was released yesterday (review coming soon). I was, and still am, completely wrapped up in Roth’s incredible world. I was faced with a question when I finished the book. What faction am I? So, I will ask you the same question. What faction are you? Why?

My answer: I am very much inline with this statement near the end of the book, “I want to be brave and selfless and smart and kind and honest.” I am Divergent. 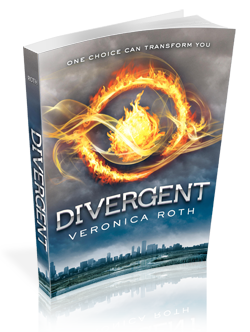