Courtesy of watching his mom’s relationships, Sebastian Hawkins knows what girls need to do to get a guy. He has what he considers a PHD in hooking up. When he needs extra cash for a car, Sebastian starts up an online venture as The Hook-up Doctor, to anonymously help girls land the guy of their dreams. Of course, his services don’t offer a happily-ever-after guarantee. He’s seen firsthand getting together never means staying together.

And then he falls in love…

With the last girl he would expect…

Totally not in his game plan.

Suddenly, Sebastian finds himself muddled in the game he’s always prided himself on. He can’t even pick up girls at parties anymore! Why would anyone want to be in love when it turns you into a stuttering, screwed-up, mess with really lame stalker tendencies? Stalking? Totally not his gig.

But the Hook-up Doctor won’t let himself go down easily. He’s always known how to give a girl what she wants and now it’s time to figure out what a boy wants… and he definitely plans on getting it.

What he doesn’t know so much about? Love.

What he also doesn’t know? He’s been falling for his best friend since childhood, Aspen, without even realizing it.

What he now realizes? He’s fallen completely off the deep end into the unfamiliar, uncharted ocean of love and relationships, and he doesn’t have a clue as to how to navigate these waters.

Bastian is a weirdly likable character. Overconfident, smooth and charming, he operates under the assumption that love either has…

And so, Bastian has become something of a player; he lives in the moment, not looking for any kind of permanence in his hook-ups.  Outwardly, he’s somewhat shallow, and seems to take a kind of pride in that. Typically, this type of character wouldn’t quite do it for me, but Bastian has several things going for him that endeared him to me instantly. Despite his somewhat jaded approach to girls and relationships, Bastian does have a good heart hiding underneath the womanizing swagger and cocky exterior he shows to the world. The way he unconditionally loves his mom, completely and sacrificially, melts my heart. Also, his loyalty and friendship with Jaden, Pris and Aspen is really sweet. He would do anything for these four people, and it’s his love for them that really caused me to fall for Bastian. As the story is told by Sebastian, getting to be inside his head allows you to see the person he truly is beyond the cocky facade. The moments when his confidence slips, when his insecurities get the better of him, these are the moments when he’s at his most adorable.

Nyrae Dawn writes Bastian with such authenticity… he’s such a total GUY. Such a total teenage boy. It’s so fun to see Sebastian’s perspective on relationships and girls. On one hand, yes, he knows how to play fairer sex — the right moves to make, the words to say to get what he wants.  On the other hand, he has NO freaking clue. What made this book such a fun read is to see Sebastian realizing that despite his attempts to steer clear of love, he’s done the unthinkable and has fallen head over heels for Aspen. The boy hands out hook-up advice to others left and right – being somewhat worldly and experienced even at seventeen – and yet realizing he loves Aspen, not knowing her feelings for him, has made him one of those sappy, emotional wrecks he despises.  It has shown him just how much he doesn’t know – that when it comes to real relationships his hook-up advice falls way, way short. The boy is clueless, and it’s alternately hilarious and heartbreaking to watch him struggle, but it’s also ultimately redemptive.

Overall, What A Boy Wants is a funny, honest read, full of heart, about a boy who doesn’t believe in love discovering that love can sneak up on you when you least expect it. 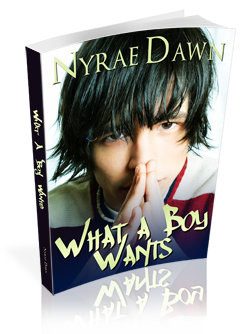 Title: What A Boy Wants