Eighteen-year-old Kali McAlister enters her steam-powered “dogless sled” in a race, intending to win the thousand-dollar prize and escape remote Moose Hollow forever. The problem? Fortune seekers and airship pirates are after her for the secret to flash gold, her late father’s alchemical masterpiece.

With her modified rifle and a pocketful of home-made smoke bombs, Kali wouldn’t normally hide from a confrontation, but taking on a whole airship single-handedly is a daunting task. Unfortunately, the other racers won’t assist her–they’re too busy scheming ways to sabotage her unorthodox sled.

When a sword-slinging stranger shows up, wanting to hire on as her protector, she’s sure he has ulterior motives, but he’s the only one interested in helping her. The question is…why?

Sometimes you just need a good little novella.  You know what I mean?  A little story to fill up an hour, to fit between longer books, to break things up, to transport you for a short time without a huge, weighty time commitment.  Last night I was cruising around Amazon looking for just that, and ran across Flash Gold.

The first few pages get off to a little bit of a rough start, but once I got past them, I found Buroker’s style to be very enjoyable.  For the short length, Flash Gold is a well done self-contained, satisfying story . The world building is just enough to give the info needed to make it believable, though admittedly, I’d like more. (Thankfully, it’s a series.)  The Steampunk details are prevalent but not overpowering, and set the stage well for the story.  I love the whole Victorian-era meets the frozen Yukon tundra setting.  It’s a pretty action-packed little novella with mechanical creations, hints of magic, suggestions of alchemy, pirates in airships, gunfights, all set against a dogsled race whose prize will afford our heroine the opportunity to get out of Dodge, and start a new life far from the frozen wastes.

The characters, while I’d still like to know more about them — and it looks like we’ll get to, this being the first in a series of novellas — are fleshed out well. Kali is a wonderfully spunky, sassy heroine.  She projects confidence and bravado, but she’s also lonely, afraid to trust people because she’s been hurt before by people from her past and ostracized by her community for her heritage.  When Cedar shows up out of the blue, answering an employment ad, she’s initially distrustful, but slowly begins to wonder if she’s finally found someone worthy of her confidence.  Cedar’s character remains pretty mysterious throughout the novel.  However, he’s one of those characters where even though you don’t know the nitty-gritty details of his life and back story, his actions shine through, revealing more about his character than words ever could.

I love the dialogue between the two as they build an tentative partnership and rapport.  It’s witty and just really enjoyable.  Clever dialogue is one of the things I enjoy most in a book —  after fully developed characters, of course — unfortunately, I find it’s something of a rarity.  I loved the conversations between Kali & Cedar, and some moments actually made me laugh out loud.  I think the dialogue was one of the reasons their relationship, though not given a lot of time to develop because of the length of the novella, worked.  There isn’t really much romance at all between them YET, but it seems as though Buroker may be moving them in that direction.  Which I love.  Good relationship development is worth waiting for, and I definitely can’t wait to see where Buroker takes these two. 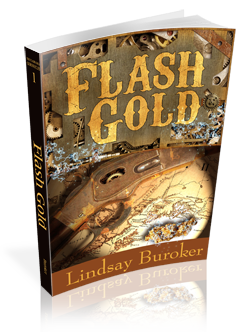