Some loves are not made to last . . . Like Romeo and Juliet, Heloise and Abelard were doomed from the start, and their romance was destined to pass into history. Yet when sixteen-year-old Callie Martin discovers a diary hidden within an antique book, their story—and hers—takes on another life. For the diary leads Callie to the brilliant and handsome August, who is just as mysterious as the secret the diary hides. Their attraction is undeniable. As the two hunt down the truth behind the diary—and that of Heloise and Abelard’s ancient romance—their romance becomes all-consuming. But Callie knows it can’t last . . . love never does. Will their love that burns as bright as a shooting star flame out, or will these star-crossed lovers be able to defy history? (Goodreads summary)

There’s just something about star-crossed lovers, isn’t there? I find it extremely interesting that some of the most enduring romances are the ones that end tragically. Arthur & Guinevere, Tristan & Isolde, and of course, Romeo & Juliet, just to name a few. So what keeps us coming back to the unhappy ending? For me, it’s the promise of what might have been; the way the two lovers burned impossibly bright before everything went so horribly wrong. It’s the ever-present “what if?”, imagining what their future might have been had not bad timing, misunderstandings, or betrayal befallen them. Maybe it’s even the vain, silly hope that this time, this time the ending might be different. Happiness so tragically thwarted. These are the stories that have made their mark on history and literature, that capture the imagination, and this is no less true for heroine Callie Martin.

A summer intern for her uncle at Manhattan’s prestigious Royal Auction House, Callie becomes caught up in the romance of Heloise & Abelard when an illuminated text crosses her uncle’s desk. Uncle Harry’s expertise lies in antique books and manuscripts, and while appraising his newest acquisition, he discovers that the book is, in fact, a palimpsest. (What is a palimpsest, you might be wondering? It’s basically a super-old recycled book. Back in the day when paper or vellum was a little harder to come by, sometimes book would be wiped clean and rewritten on. Today, with the benefit of technology, modern-day scholars are able to find and sometimes read the original words hidden beneath the newer. Such books are obviously very special and extremely rare.) Beneath the gorgeous illustrations and religious text of the book, lies the mysterious pennings of a tragic love by an individual known only as A. To correctly appraise the book’s value for auction, her uncle must first discover and verify who the anonymous A. truly is. And so, Harry gives Callie along with August, the handsome son of an antique book dealer, the job of unraveling the secrets of the palimpsest’s original author. As they uncover the story of A. piece by piece, Callie begins to fall for August. Realizing that their own stories share parallels with the ill-fated lovers’, Heloise & Abelard, August & Callie begin to wonder about the fate of their own fledgling but passionate romance.

Callie. When Callie was in Kindergarten, her mother died of cancer leaving Callie in the care of her cold, emotionally-distanced father. She and her dad do not have what one might call a close relationship, and while she hardly knows her workaholic dad, she knows even less about her mom. Her refuge/confidante/trusted parental figure has always been her Uncle Harry, with whom she spends her summers. He’s Callie’s closest link to her mom and the nearest person she has to a supportive, involved dad. In turn, she’s like the daughter Harry never had. I love the multi-faceted dynamic of Callie and Harry’s relationship. It’s very sweet and most certainly one of my favorite aspects of Illuminated.

Callie herself is a perfect blending of her parents’ personalities – her success-oriented dad with his high expectations and her free-spirited, spontaneous mother. Callie is extremely intelligent and on the Ivy League track for college, pushed and prodded to academic excellence by her father. She desperately wants to know more about her mother – to discover who her mother was, how Callie herself fits within the story of her parents’ failed relationship, and if her future relationships might be tainted by the toxicity that marred her parents’ marriage. She’s determined, driven, a bit more on the reserved side than August, but she can also be impetuous, allowing her heart to lead her.

August. August is endearing. He blows into Callie’s life and immediately takes her heart by storm. He’s optimistic, brilliant, confidant, friendly, honest, easygoing and charming. He’s instantly drawn to Callie. It’s clear from the get-go that August knows what he wants, and Callie is it.

Typically, I’m not a fan of relationships that reach an extremely deep level of commitment in an unbelievably short amount of time. However, in Illuminated, while I thought Callie and August’s relationship develops quickly, it works for me. Perhaps it’s the shared excitement, the adrenaline rush of being thrown together, hunting down clues to an archaic mystery together. Perhaps it’s the poetic, romantic words of A. bringing them together. Perhaps it’s the fact that August is just so sweet and so obviously into Callie. Perhaps it’s that, even though I’m usually a skeptic, I want to be mushy and believe in soulmates – that one soul can instantly recognize a like soul. Perhaps it’s a combination of all of these reasons. But given the conditions, I can understand how an intense romance could be kindled under such circumstances.

In addition to solving the mystery of the book, both Callie and August are two people who are struggling to avoid their parents mistakes and “eccentricities” – they don’t want their parents’ choices to define them. Both characters have very interesting back stories and family lives. Both are a bit heartbreaking, and it’s interesting to see the story of the illuminated manuscript unfold alongside the events and revelations of both August & Callie’s personal histories – how they merge and differ. The mystery of the book quickly transforms into an intensely personal journey as Callie wonders what the tragic outcome of the Heloise & Abelard’s story means for her own, and what it means for her and August.

Overall, with just the slightest hint of magical realism, Illuminated is a story of the all-consuming beauty, the hopefulness, the limitless potential of young love contrasted against the tragedy of a centuries old romance. 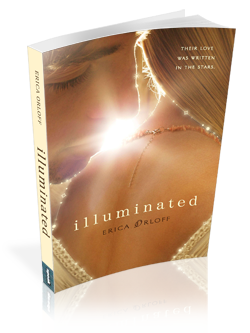