Zellie Wells has a devastating crush on Avery Adams, the son of her mom’s high school sweetheart. At her sixteenth birthday party, held in the basement of her dad’s church, she finally finds the courage to talk to him. Turns out, the devastating crush is mutual.

As Avery takes her hand and leads her out onto the makeshift dance floor, Zellie is overwhelmed by her first vision of his death; shocking because not only are they both covered in his blood, but they’re old, like 35, and she is pregnant.

Afraid to tell anyone about the vision, (she’d just be labeled a freaky black magic witch, right?) Zellie keeps the knowledge of Avery’s future to herself and tries to act like any other teenager in love. When they get caught on their way to a secret rendezvous by her mom and his dad, they are forbidden to see each other.

Now Zellie must choose between severing all ties with Avery, like her mom did to prevent his father’s death, and finding a way to change Avery’s future.

Glimpse was a book that I wanted to like, but just couldn’t seem to get into. The beginning of the book is well thought out and well written, but upon reaching the point of  Zellie’s 16th birthday party, the writing starts unraveling for me. Events seem rushed, the characters aren’t developed enough and seem one dimensional, the dialogue is awkward at times, and the romance evolves unbelievably fast. This novel carries some pretty emotional, heavy themes but I felt like the gravity of those situations didn’t really come across.  With all the things that turn Zellie’s life completely upside down, she seems rather unaffected.

Overall, I think Glimpse has real potential, and there’s nothing wrong with the basic idea of this novel, but the emotional, relationship and character development left something to be desired. 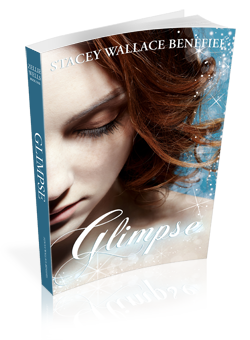