Seems like Leo Scott has it all: looks, brains, and athletic talent. He’s captain of his high school swim team with a bright future in college and beyond. But Leo has secrets. His mother’s crippling car accident has devastated his family and left Leo to deal with his father’s abuse, battered and alone.

Leo’s girlfriend Audrey Rose is poised for her own share of success. As one of Florida’s top high school swimmers, Audrey dreams of college swimming stardom. But there’s an obstacle to her glorious rise to the top. Her number-one supporter–her father–is in prison for murder.

Part murder mystery, part tale of young love in a military family, this gripping story takes readers on a journey from Pensacola to Annapolis. Leo and Audrey must band together to rise above the adversity they encounter and find their true selves in the process. When everything’s on the line . . . streamline. (Goodreads summary)

Though Streamline is a book with multiple narrators, at its core, this story is Leo’s. Leo is one of those characters that tugged on my heartstrings – grabbing a hold of my sympathies to the point where I just wanted to give the poor kid a hug. A victim of both his father’s physical and emotional abuse, Leo is exhausted from his father’s constant mandate of being nothing less than the best, from hiding his family’s home life, from the stress of living under his father’s violent, controlling fist. Commander Scott, Leo’s father, sees his youngest son as his only chance to leave a successful legacy behind. This desire has reached the point where he drives his son relentlessly to achieve his own idea of “perfection,” punishing Leo severely when he fails. Leo, having endured years of this treatment, views himself as somewhat “less than,” he’s been taught to think that failure deserves such treatment. It goes without saying that Leo’s view of human interaction and interpersonal relationships have understandably skewed by years of mental conditioning caused by abuse. He fears his dad, and though he may find relief at the momentary absence of his father at school and swim practice, Leo also desperately craves his approval. Leo is talented, intelligent, sweet, loving, loyal to a fault, and yet he’s also a very broken young man. It’s completely heartbreaking to see the dichotomy between the strong, gifted, funny young man he’s able to be around others, and the scared boy who lives in fear of his father’s wrath. And it’s alternately fascinating and saddening as Leo struggles with whether his future has been irrevocably tainted by his father – if he can become the man he wishes to be or whether history is doomed to repeat itself.

I thought the way Lane explores all the facets of abuse handled well. All four members of the Scott household get a turn at narration – even the Commander – giving the reader a comprehensive look at a family that’s being destroyed from within, in all its emotional complexity. From why a spouse can’t just walk away, to all of the excuses and justifications one can make for their loved ones, to the twisted view of love that an abuser uses to rationalize their behavior toward their spouse and children, Lane takes a look at it all through the eyes of the Scotts. It’s complicated, it’s heartbreaking, it’s enlightening, and Lane handles the difficult subject matter skillfully.

Abuse is not the only tough subject that Streamline brings to the table. Substance abuse, depression, suicidal thoughts, traumatic disorders, teen pregnancy, infidelity, murder and abortion also make appearances. I’m not typically a fan of what one might call “issue contemps,” and these are most certainly not easy subjects to read about. Yet Lane, while conveying the seriousness, gravity, and consequences the various situations can have upon the individual or a group, does so with hope. It’s a book that has moments that might break your heart, but it’s also full of little victories, small moments of happiness that balance out the darkness. A book like this is weighty and can be emotionally taxing, but I in no way found it to be a depressing book.

Also at the heart of this story is the romance of Leo & Audrey. At the point where the story picks up, Audrey and Leo have been together for several years. While Audrey thinks Leo’s dad is about as strict as they come, she’s never guessed at the level of abuse that goes on in the Scott household. Where Leo is a bit more restrained and burdened with keeping his home life a secret from everyone, Audrey is fiery, passionate, fun-loving, a bit of a risk-taker, and her own person. Her independence and individuality, the freedom she represents, is probably one of the big reasons Leo has fallen for her, given that he feels trapped by his father and is right on track for a future he’s not sure he wants. But Leo’s not the only one to have daddy issues. Audrey’s father has been accused, wrongfully they suspect, of murdering a fellow Navy officer over a promotion. Leo & Audrey have bonded over their mutual family problems, supporting each other through some really trying times – even if Audrey wasn’t fully aware of the whole situation – and their love has matured into something really sweet and very true. The way they love each other is just adorable and heartwarming.

The research that went into this book must have been time consuming. There are so many detail-oriented, important bits of establishing background information required to build Leo’s world – competitive swimming, the ins-and-outs of the US Navy and, as I already touched on, all of the psychological issues that are touched on in Streamline. It’s a book that could easily fly or fail based on the quality of the author’s research, and it’s obvious Lane has done her homework. She writes authoritatively about each subject, and the seemingly inconsequential details about Navy life and swimming, when added together, lend so much realness and richness to this story.

Overall, Streamline is a wonderfully, emotionally complex story about the ones we love, the ones we hurt, the mistakes that break the human heart, and the unconditional love that puts the pieces back together.

* Definitely a book for the upper YA crowd due to mature themes and violence. 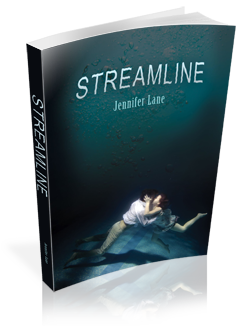