We know you are here, our brothers and sisters . . .

Pressia barely remembers the Detonations or much about life during the Before. In her sleeping cabinet behind the rubble of an old barbershop where she lives with her grandfather, she thinks about what is lost-how the world went from amusement parks, movie theaters, birthday parties, fathers and mothers . . . to ash and dust, scars, permanent burns, and fused, damaged bodies. And now, at an age when everyone is required to turn themselves over to the militia to either be trained as a soldier or, if they are too damaged and weak, to be used as live targets, Pressia can no longer pretend to be small. Pressia is on the run.

There are those who escaped the apocalypse unmarked. Pures. They are tucked safely inside the Dome that protects their healthy, superior bodies. Yet Partridge, whose father is one of the most influential men in the Dome, feels isolated and lonely. Different. He thinks about loss-maybe just because his family is broken; his father is emotionally distant; his brother killed himself; and his mother never made it inside their shelter. Or maybe it’s his claustrophobia: his feeling that this Dome has become a swaddling of intensely rigid order. So when a slipped phrase suggests his mother might still be alive, Partridge risks his life to leave the Dome to find her.

When Pressia meets Partridge, their worlds shatter all over again.

Pure. Wow. Pure is a book that doesn’t throw any punches whatsoever. It unapologetically threw me right into the midst of the horrific nightmare that the world has become, holding me captive until the very last page. It’s disturbing, it’s scary, it’s deeply saddening, but there are little moments that remind one why it’s important to persevere and overcome – moments of tentative hopefulness that outshine the obviously glaring despair that pervades the world of Pure.

The world as we know it is unrecognizable; changed by cataclysmic bombings the survivors of this holocaust refer to as “The Detonations.” The remaining population is divided into two groups – the Pures, who made it into the Dome before the bombings started, and the wretches who didn’t.

Pressia Belze is one of the survivors outside the Dome, barely eking out an existence alongside her ailing grandfather. The world that’s been left to them is sick, deformed, brutal, frightening and deadly. When the bombs detonated, they not only destroyed a way of life, they also ravaged and mutated every single biological life-form outside of the Dome’s protection – inanimate objects fused with living flesh, animals fused with people or plants, people inextricably attached to other people, people merged with the very earth itself. Ghastly, monstrous creatures roam the desolate, sometimes living, landscape. Those who still retain their humanity, live in poverty and despair.

Pressia. Burned, scarred, orphaned and forever fused to a beloved childhood toy, Pressia clings to her memories of the Before. Subsisting on hazy memories of her parents and their life together, her grandfather fills in the gaps until she’s not sure where her memories start and his end. She looks to the Dome as an unobtainable place of refuge, salvation, and normalcy, while also hating it – knowing she’ll never be admitted to live that life of comfort. Though it’s no longer possible, she longs for things to be like they once were. Almost sixteen, she knows that her life is about to experience yet more upheaval – her days of looking after her dying grandfather are numbered. The military regime, OSR, that has sprung up in the absence of any organized government forcibly takes any teenager of age for their own purposes. She and her grandfather have taken precautions to prevent her from being snatched by the OSR against her will, but is it enough? Is a life of hiding, just surviving, any kind of life at all?

Pressia is tired. She’s a strong character, but she’s surrounded by so much hopelessness that her despair sometimes competes with her will to survive. She’s built up a tough exterior in order to make it in her world, but underneath her manufactured walls hides a kind, compassionate heart. She’s street smart, and a strange mix of jaded and pragmatic, yet privately idealistic. Pressia is braver than she thinks, but she searches for a sense of purpose.

Partridge. Partridge is a Pure. Growing up in the Dome, he’s experienced a life where all of his physical needs have been met, he’s had the benefit of a structured education, and his body remains unmarked by the Detonations. Yet, the perfection of life inside the Dome is no less a prison than the outside is a wasteland. Life is strictly regulated, freedoms have been sacrificed for the betterment of humanity, people’s lives are shaped and molded for them by men such as his father, the Dome’s chief architect. His father, the only family Partridge has left is estranged – more interested in his work, than in his son. When Partridge discovers that his mother, whom he loved dearly, may still be alive somewhere on the Outside, he’s willing to risk everything to find her.

When Partridge is first introduced, he’s clearly disenchanted with his life, wondering what truly lies beneath the rigid rules and gigantic propaganda machine set in motion by his father. He’s analytical, smart, discerning, plays it close to the vest. He senses that things are not as they seem, but at the same time, he is somewhat resigned to his fate that his father has put before him. What can he really do? Like Pressia, he’s looking for a purpose, and the possibility that his mother may have survived the Detonations gives him a starting point. Partridge is a character that definitely comes into his own throughout the novel, and I enjoyed watching him mature from discontented school boy into who he’s meant to become.

Bradwell, Lyda & El Capitan. These characters I just have to mention briefly.. Bradwell, the conspiracy theorist and OSR/Dome resister, isn’t a character I expected to like, to be honest. But he grew on me – his choices defining his character, not merely his rhetoric. Lyda surprised me as well. I love how she takes everything in stride, her bravery, her strength and her patience. El Capitan is another character I didn’t see coming; he became a favorite. And that’s all I’m going to say about that.

Story. This book is a study in contradictions. Baggott’s writing is so elegant, so beautiful and lyrical. Yet the imagery her lovely prose conjures is so unsettling, provoking and awful. I was filled with such sadness for these people who’ve been forever altered – who’ve lost their humanity, their families, their lives or themselves to the devastation – while also being a little freaked out by how Baggott described these… people. In some ways it’s not an easy book to read, and yet it is. At 448 pages it’s a little on the longer side, but it’s a surprisingly quick read. I devoured this book in under 24 hours, and when I wasn’t able to be reading it, I was definitely thinking about it. It’s one of those books that grabbed me, and demanded my undivided attention.

Overall, Pure is unlike any book I’ve picked up before, in a good way. It’s gorgeous, and it’s ugly. It’s despairing, yet it’s hopeful. It’s about survival and it’s about really living. It’s about betrayal, and it’s about trust. It’s about endings, but it’s also about beginnings. It’s alien, and it’s so very human. It’s a book that is definitely worth your time. 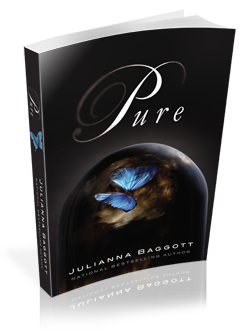 Source: Gift from Hannah Lorraine @ In the Best Worlds