Orphaned at an early age and unaccepted by her peers, Victoria Warrick is accustomed to hardship and has always felt removed from those around her. As she finishes out her junior year of high school she becomes more aware of a darker, hidden side of her personality – a side that terrifies her. When she becomes the target of bullying at school, that unknown side of her emerges resulting in disastrous consequences. Things only get worse when she inherits a box of family heirlooms on her seventeenth birthday, confirming Tori’s suspicions that she is far from a normal teenage girl. Instead, she discovers that she is descended from a bloodline of incredibly powerful witches, a power that demands much in return.

In a desperate attempt to retain some measure of normalcy, Tori enrolls at a new school at the start of her senior year, determined to reinvent herself and to forget about the family history she fears she’s doomed to repeat. However, when she meets the mysterious and maddening Christian Devereux, whose beverage of choice just happens to be of the bloody variety, her already strange life takes a decided turn for the completely abnormal. In the midst of an centuries-old feud, surrounded by betrayal, secrets and the inescapable curse that flows through her veins, will Tori overcome all that threatens to destroy her?

Wow. I don’t know what exactly I was expecting from this book, perhaps just a fun, but run-of-the-mill, witch or vampire story? What I ended up with far exceeded my expectations. It rocked my socks.  Howard has taken two cliche and overdone paranormal sub-genres and has created something entirely new and exciting in Bloodspell. There are so many elements of the story that could have fallen into “been there, read that” territory; new girl at school meets boy, they are inexplicably drawn to one another, boy keeps pushing away girl because they “shouldn’t be together,” boy is “dangerous” and not who he seems, etc. However, Howard repeatedly puts her own little creative twists on these oft-used story foundations and turns what could have been “Eh.” into an unique page turner. And no, I’m not going to go into more detail about what makes it such a well-crafted story. I’m purposefully being cryptic so that I don’t spoil anything and that you, Dear Reader, will pick up this book and read it for yourself. Because you should. You really, really should.

Because most of my love for books is so character-driven, we’ll start with Victoria. She was so desperate to be normal, so afraid to accept her magical heritage, so afraid of the potential her power holds and what it might make her. She’s an easy character for me to relate to, and I could easily understand her fear and her reluctance to accept who and what she is. As she gets better acquainted with Christian, knowing him helps to awaken her own strength as she learns more about herself and how the curse applies to her. She’s insightful, intelligent, and despite her initial ostrich-like behavior, is quite daring and courageous. Howard develops her so well throughout the book and I really enjoyed reading Tori’s journey to who she becomes.

Also, in regards to the characters, I loved how both Victoria and Christian struggle with the reality of what they are and question if what they are makes them inherently evil. It’s interesting to watch both of them attempt to fight against what fate has made them, their successes and failures. And of course, it’s the fact that Howard allows these lapses in her characters that make them all the more interesting.

In addition to their individual struggles, Christian & Victoria’s romance is an added complication throughout the story. A little bit of a modern-day, paranormal Romeo and Juliet, their love is not supposed to be. Due to an ancient treaty between vampires and witches, it’s not only frowned upon by both their races, but is illegal as well, and the consequences to their races discovering such a relationship are, shall we say, extremely final. A variation on the love vs. duty romance, which I’ve already established in previous reviews that I adore, Christian and Victoria had me completely wrapped up and invested in their relationship all the way to the end. They could face real and frightening consequences for loving and standing by one another and knowing this as a reader, makes their relationship feel so genuine and rooted in something more than just the superficial. So…what happens to them? I don’t know! Well…I do, but I’m certainly not going to tell you.

Speaking of the forces and events that would see our two lovers torn apart, the world of Bloodspell feels very authentic, which always makes me a happy reader. I’m a history buff and therefore love when I can lose myself in a fictional world that is supported by much of its own history.  A well-documented, well-presented past just lends a story so much depth and context, and for me, makes it a more enjoyable reading experience. This book has depth in spades. Howard has created a paranormal underworld that exists within in our own, and has given it legend and a mythology, created a believable framework as to how it works, supplied incredibly interesting back story for characters and events, and developed her own fascinating political systems.

Verdict? Read this. Yes, it has vampires. Yes, it has witches. And Amalie Howard has blended them together to create a paranormal romance debut that’s both fresh and riveting. 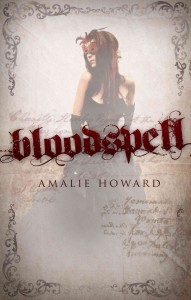 Check back on August 1st for a chance to win a signed copy of Bloodspell!