Mia Price is a lightning addict. She’s survived countless strikes, but her craving to connect to the energy in storms endangers her life and the lives of those around her.

Los Angeles, where lightning rarely strikes, is one of the few places Mia feels safe from her addiction. But when an earthquake devastates the city, her haven is transformed into a minefield of chaos and danger. The beaches become massive tent cities. Downtown is a crumbling wasteland, where a traveling party moves to a different empty building each night, the revelers drawn to the destruction by a force they cannot deny. Two warring cults rise to power, and both see Mia as the key to their opposing doomsday prophecies. They believe she has a connection to the freak electrical storm that caused the quake, and to the far more devastating storm that is yet to come.

Mia wants to trust the enigmatic and alluring Jeremy when he promises to protect her, but she fears he isn’t who he claims to be. In the end, the passion and power that brought them together could be their downfall. When the final disaster strikes, Mia must risk unleashing the full horror of her strength to save the people she loves, or lose everything.

April 14th. It’s been one month since the Puente Hills Quake hit Los Angeles. One month since seventeen-year-old Mia Price’s life has been anything resembling normal. Los Angeles proper has been completely leveled, with the exception of downtown’s newest architectural achievement, The Tower. Thousands are dead. Thousands are homeless.  Thousands are desperate and disillusioned. Hope is at a premium these days, and for thousands, Rance Ridley Prophet is there to fill the void. A televangelist whose religious movement before the quake was considered to be bordering on the cult-ish side, Prophet with his presumptuous surname claims to be the Mouthpiece of God. And indeed, many are convinced of his connection to the Divine, as he accurately predicted the 8+ quake within minutes of its occurrence. Now he prophesies that another quake, even more devastating than the last, will hit Los Angeles on April 17th, and that the end is, in fact, nigh. But salvation from the coming destruction can be had, he promises, in the form of belief and unquestionable obedience to Prophet. The broken, injured, helpless and hopeless begin to flock in droves to his revival meetings – his number of Followers growing daily.

In the midst of the chaos and disturbing religious fervor that has gripped Los Angeles, Mia Price is desperately trying to keep her family from falling apart. This is not a role Mia is accustomed to playing, as her mom is usually the one to keep them together and going – especially in the wake of Mia’s strange attraction and multiple exposures to lightning strikes that have uprooted and unsettled her family time and time again. However, her mother is currently suffering a mental breakdown after being trapped for days under rubble with the dead. Her brother, Parker grows increasingly restless and distant. Mia finds herself trying to be the anchor for her floundering family. After a month, their resources begin to run alarmingly short, and so when food rations are promised to families whose children return to school, she and Parker attend primarily with the goal of putting food back on the table. Once back at school, Mia can’t help but notice the eerily charged atmosphere — the aggressiveness of Prophet’s Followers and their constant proselytizing, as well as the appearance of another mysterious organization that seems to be at odds with them. However, both groups seem to be aligned in their unwavering intent to recruit her at all costs for a destiny she never wanted. When she meets a mysterious boy named Jeremy, she cautiously wonders if she may have found an ally in this mess she’s been caught up in.  But can she really trust him? As the 17th approaches, Mia will discover if the fate she’s chosen for herself is strong enough to defeat the fate she’s been given.

There’s this incredibly sinister sense of “wrongness” that pervades this entire book. It’s a tone a lot of these “end-of-the-world” books try to generate, but, in my opinion, rarely can maintain consistently. Bosworth not only maintains this atmosphere in Struck, but successfully grows and evolves it throughout the entire book. The wrongness stems not only from the destruction and inevitable emotional, physical, and social ramifications that an earthquake of this magnitude would entail, but the feeling that something has invaded the minds and hearts of the people of Los Angeles. Be it the cultish religious devotion of the Followers, or the creepy underhandedness of the Seekers, the apathy of the Rovers or the general sense of moral decline and despair of the rest of the surviving population — it just feels off. There’s a sense in which groups are drawing their lines in the sand, and the situation could quickly turn volatile.

Though perhaps the main reason that the world Bosworth has created is frightening is because, despite the paranormal aspect, the scenario she poses seems rather plausible given the right circumstances. I mean, when catastrophe strikes, it’s not uncommon for people to go back to their religious roots they may have strayed from, or for those who never had any religious affiliation at all to suddenly seek it out. Given the vulnerable emotional state of people in times of crisis, it’s not beyond the realm of possibility that they join a cult movement that so closely resembles the familiarity of Protestantism. They want salvation from their less than ideal circumstances. They want someone to depend on; someone who seems competently in charge. Someone who assures them that everything is ok; that everything will be ok. And Prophet provides that.

Mia, our main character has a pretty rough go of it in this novel – making the best she can of an impossible situation. Everyone in this novel has an agenda, and they aren’t exactly keeping it a secret that they have one. Mia is understandably skeptical as to why these people want her so very badly, and she’s not sure she buys into their whole destiny byline. She finds herself deep in the middle of a dangerous situation and she’s not sure who to trust. Her primary goal is to protect her family, and these people use this to pressure her unconscionably. I really sympathize with her feelings of being caught between a rock and a hard place. In the book, she’s accused of burying her head in the sand – of ignoring her destiny – but really, I think she’s fantastically strong. It takes guts and courage to question and stand up to those who pressure you against your will, to put your family’s needs ahead of your own, to do what it takes to protect those you love. It takes strength, a stubbornness, tenacity, resiliency and resourcefulness, and Mia has all these wonderful qualities.

The book blurb calls Mia a lightning addict, but – and maybe I just haven’t been as exposed to addiction as others – she didn’t really seem like an addict to me. It was more like she wanted to avoid it as much as possible. It does calls to her when it’s near – a siren’s song – but she seems more wary of it than craving it. She knows the consequences of getting hit, – for herself, for anyone she’s near at the time of the strike, and the pressure it puts on her family. She was presented more like an unlucky, unwilling lightning rod, than an addict who actively seeks out their next fix.

Odds ‘n ends. Bosworth’s writing is so descriptive. Her imagery of post-quake Los Angeles so striking and easy to visualize. Her paranormal concept is so simple, yet so captivating. This is the first book in a series, if Goodreads is any accurate indication, and I’m eager to learn more about this paranormal twist she’s created. 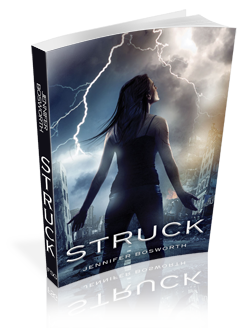 Published: May 8th 2012 by Farrar, Straus and Giroux BYR

Source: Review copy via Around the World ARC Tours