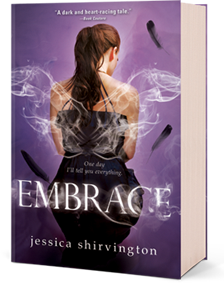 “He turned to face me, hurt glistening in his eyes.  ‘Do you love him?’

‘And what about me, Violet? Do you love me?’

‘That’s not fair.’ I looked down at my feet; my pants were covered in dirt and dried blood.”

“‘It’s a slippery slope, the road of sin.  Even those with the most noble of causes can justify the need for it.  Fabulous, isn’t it?  He truly believes in his crusade, even as it stains what is left of his soul.'”