Future Warden Queen of the Mer, seventeen year old Madly James is currently residing in the small town of Slumber where she is given the unique opportunity to learn about and live among the people she will one day rule. When eight of the dreaded Lore, evil spirits the rest of the world commonly recognizes as fairytale villains, are released from Mer captivity, they threaten the safety of all magical descendants, not to mention the world. An unknown traitor has set this devious plan in motion and has also taken Madly’s family hostage. Endowed with special abilities only granted to the royal family, Madly is the only one who can recapture the missing Lore, save her family and her kingdom.

The most immediate threat to the inhabitants of Slumber comes from the Lore, Wolfhardt; a bloodthirsty wolf-monster that once stalked a little girl in red through the woods to her grandmother’s house. Now that he’s escaped, he’s back for the girl’s descendant with one goal in mind – to finish what he started centuries before. Aiding Madly in her quest to stop and imprison Wolfhardt is Jackson, the handsome Sentinel to whom she lost her heart so long ago, but with whom a relationship is strictly forbidden by the morays of Mer society. Will Madly be able to protect her people and her heart?

First of all, can I just say how much I love mermaids? Well, I am (going to)…and I do (love mermaids). There’s just something romantic and enticingly other-worldly about a half-human, half-fish, magical race that lives beneath the seas and Leighton has created a beautiful mythology and history behind her Mer culture. There are many tantalizing tidbits about Madly’s society sprinkled throughout the book that together create a wonderfully detailed picture of this magical world – why it exists, how it works and how it is structured. I especially love the whole idea of the Lore as these evil, malicious spirits intent on wreaking havoc, that to common knowledge only exist in children’s storybooks as fairytale villains. If you stop to think about it, a lot of those un-Disneyfied fairytales by the Brothers Grimm and others are incredibly frightening stories that could keep many a small child awake night, but are easy for adults to dismiss when regulated to the realm of imagination. I mean, just imagine if Rumpelstiltskin were real, or Mother Goethel, or the cannibalistic witch from Hansel & Gretel? <shudder>  Deliciously terrifying, right? Leighton does a wonderful job of bringing to life the rather horrifying side of fairytales in her re-imagining of an ages-old tale. I love when authors are able to accomplish world building so well and I’m able to immerse myself in new, exciting universes. Leighton’s descriptions are so vivid that it makes it easy to imagine what Madly’s world and it’s inhabitants look like.

At it’s heart, Madly & Wolfhardt is a love story. And I’ll admit, I’m a complete sucker for the love vs. duty type of romance. There’s just something about forbidden love, the love that isn’t meant to be, that I just adore. It makes me cheer on harder for  the seemingly ill-fated lovers and become that much more invested in their relationship . I also should probably admit that I’m also a total sucker for romances involving people who have a shared history/childhood friendship; oftentimes there’s so much more depth to those kinds of relationships because of the shared familiarity that exists between them. So needless to say, I was completely sucked in by the heart-wrenching, sweet, tempestuous romance between Madly & Jackson.

Madly herself was a very compelling character. Though a princess, and the lone member of the ruling family free of the Lore’s clutches, she wasn’t about to let anyone treat her like some fragile thing that needed protecting. When she discovered her world, family and friends were in trouble, she stepped up and was ready to do something about it. Courageous, stubborn to a fault, slightly impetuous, confident, regal yet compassionate Madly embodies everything I imagine a good princess to be and she’s really a lovable character.

In fact, all of the characters had a wonderful uniqueness and weight to them, though I probably loved Jersey the most – über quirky and completely endearing. I won’t say much about it, but I think Leighton did some interesting things with her characters and took them in some unexpected directions that ultimately I was very pleased with. You’ll just have to read it to figure out my oh-so-cryptic statement. <wink wink>

Verdict?  This book was charming; lighter in tone than her previous books, but with all the same urgency that a struggle between good and evil should have.  Leighton has truly created a fascinating mermaid mythos and a heart-pounding romance that will leave you anxiously anticipating the next book. 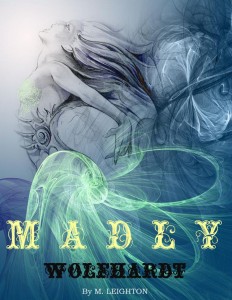