Heartbroken over the tragic death of her fiancé, seventeen-year-old Zora Stewart leaves Baltimore for the frontier town of West Glory, Oklahoma, to help her young widowed aunt keep her homestead going. There she discovers that she possesses the astonishing ability to sense water under the parched earth. When her aunt hires her out as a “springsweet” to advise other settlers where to dig their wells, Zora feels the burden of holding the key to something so essential to survival in this unforgiving land. Even more, she finds herself longing for love the way the prairie thirsts for water. Maybe, in the wildness of the territories, Zora can finally move beyond simply surviving and start living.

1890. A year has passed since Zora Stewart lost her beloved Thomas in a tragic shooting; a year since her best friend Amelia returned to Maine. Though she’s grieved her fiance for a socially acceptable amount of time, Zora’s heart remains broken. She remains isolated, buried in her sorrow for a love and life that will never be. Her mother, worried about her daughter’s depression, encourages Zora to start living again. Zora knows she must move forward, but she doesn’t know how she can go back to a life of balls and frivolity — she’s lost her innocence. She decides that a life of service to others, in memory of her dear Thomas, is what would be most appropriate for her.

Her family and friends are not so convinced, and after being tricked into attending Baltimore’s Sugarcane Ball, Zora is afforded the opportunity to find herself “ruined” before her peers. Gladly done with Baltimore, she’s packed up and sent off to the Oklahoma territories to live with her recently widowed Aunt Birdie. Once in Oklahoma, she discovers that she has a unique connection to water – she can sense it and see where the water runs beneath the earth. Her aunt, hardworking yet struggling, sees Zora’s gift as an unexpected boon in hard times, and Birdie encourages Zora to hire out her singular, elemental talent. Zora – all too aware of the dangers and consequences of magical gifts – reluctantly agrees. With a new life in the territories, her new-found power and two intriguing young men vying for her attention, will Zora find herself in over her head once again? Or is this new path exactly what her shattered heart needs?

Zora. I was excited to discover that The Springsweet features Zora as the main character. She is a very prominent figure in the first book of this series, The Vespertine — her character already beautifully developed in that story. I was absolutely heartbroken for her at the end of the first book, and I desperately didn’t want that to be the end of Zora’s story. In The Vespertine, Zora is portrayed as effervescent, quick-witted, beautiful, intelligent, impulsive, popular amongst her circle of friends, yet she’s also kind and welcoming. Despite their many differences, Zora and her cousin Amelia become fast friends.

In the aftermath of that glorious, disastrous, preternatural summer, The Springsweet finds Zora much changed – a shell of what she once was. She’s withdrawn, lost, and doesn’t know how she can ever recover from the loss of Thomas. However, underneath her grief, she still retains many of those qualities.  They’re just tempered with a healthy dose of reality and a better understanding of consequences. Moving to the plains of Oklahoma, she’s no longer surrounded by the things that ceaselessly remind her of what she’s lost, and her mind and hands are kept busy by the day-to-day labors of eking out a living on the land. Zora in The Springsweet is hardworking, is still kind and caring. She knows her mind, has a matured confidence and has little tolerance for injustice. She just needs to rediscover who she is in the wake of her tragedy.   I especially love Zora’s scenes as she works through the emotions she’s been running from. They aren’t heavy-handed, “wham-bam-thank-you-ma’am” epiphanies, but rather gradual realizations on Zora’s part about where her life has led her, who she is and what she wants.

As previously stated, once in Oklahoma, Zora discovers her gift to sense water. To the farmers who claimed their plots in the Land Rush of 1889, water is vital. It’s everything toward ensuring their livelihood and the future ownership of their stake of land. As a result, Zora’s talents as a springsweet are much in demand, for those who cannot locate a viable source of water for their family and crops. I’ll admit, I was extremely curious to see why, when things ended so badly when Zora pushed Amelia to use her powers as an interesting parlor trick, why Zora would willingly go along with her Aunt Birdie’s plan to be hired out as a “dowser.” Zora knows all to well how quickly people can turn from enraptured to rabid when the magic isn’t agreeable to them. She’s witnessed herself how the magic isn’t just a fun diversion – people’s lives are inevitably altered because of using it. However, Mitchell’s reasons for having Zora agree to Birdie’s suggestion, despite the dangers, makes sense in the context of this story and their situation.

In The Vespertine, I was impressed by Mitchell’s lyrical writing, her descriptions, her dialogue. It all came together so well to create a beautiful historical piece. The Springsweet is no different. Her style is just so lovely, every phrase evocative, so vividly descriptive. I had no problem picturing the glittering ballrooms of Baltimore, cramped, smelly stagecoaches, or the vast windswept prairies. I love a well-researched historical, and one that can stay in period with the dialogue and prose, and this series does that beautifully.  However, though Mitchell’s writing is historically believable and achieves a wonderful emotional depth, it’s not at all dense.  It’s actually a fairly fast read.

Overall, The Springsweet is a beautifully penned, magical story about a girl on the cusp of adulthood – her story of self-realization and emotional healing – set against the fascinating historical backdrop of the Oklahoma territories.  I loved this book more than the first and I am anxiously awaiting Aetherborne! 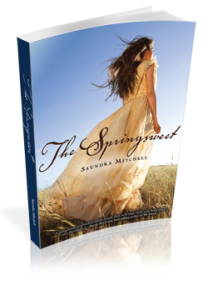 Source: Review copy via Around the World ARC Tours