Yes, this is indeed a review of the entire Iron Fey series! In lieu of posting a single book blurb, clicking on one of the covers below will take you to that book’s summary.

I decided that since this whole series is written (and I may or may not have read the entire series, bonuses, and reread various key parts of the series in about 5 days…like in a row…yeah it was an Iron Fey-athon) that I would just write a review of the whole series. I don’t think at this point I could write a review of each book and really do it justice, nor do I want to try to split my thoughts on each book. It’s a cohesive whole in my brain and having finished the whole series, I am so glad that I did not have to wait for each installment to be written! I may have gone nuts from the agony! So here’s how it breaks down bookwise:
[box]

I got this one as an Audiobook and oh my word, the gal who does it…Ah-mazing!

This is only available as an E-book and is worth it, but not ABSOLUTELY necessary. It’s fun and I thoroughly enjoyed it but the highlights are covered in the next book so you could potentially skip it if you had to. 😉

Oh my goodness, this is only available as an e-book as well and you absolutely have to read it. Hands down, totally worth bending over backwards to get your hands on this! It will make the next book so much more enjoyable and give you huge insight into who Puck is. =)

This is a little short story of fluff available only at www.ironfey.com and if you like the outcome of the series, you’ll want to read it. Very fun but not necessary to the series or anything like that. =)
[/box]

Now, let me clarify a couple things. I don’t usually read books where Faeries are the “good guys.” In general, I don’t like the Fair Folk because…well…they are deceitful little creatures who are always trying to rope people into bargains and favors that are oftentimes deadly. They don’t really have a lot of noble qualities typically. Faeries can’t lie, but they sure know their loopholes! These faeries and their world, which Kagawa builds by perfectly melding myth/legend with her own imagination, are no different…that is, until you add in the half-human daughter of the king of the Seelie Court. Then things get very interesting and some formerly conscience-less, selfish, manipulative, arrogant beings…well, you’ll see. =)

At first I wasn’t sure if I would like these books. Kagawa begins building her world around a 16 year old named Meghan Chase and her best friend Robbie. Soon, things get interesting and she finds out that she is only half human. She is the daughter of a human mother and the King of the Seelie Court, King Oberon…yeah the one from A Midsummer Night’s Dream . Part of the world Kagawa builds is that the Faery world, also known as the Nevernever, and all of it’s inhabitants are the creations of human’s dreams, beliefs, and imaginations. This was my second sort of “I don’t know about this…” moment. I felt a little bit like I needed to clap and say, “I do believe in faeries! I do! I do!” however, by the end of The Iron King I was sold and fully enveloped in this beautiful world. So, that’s why you’ll notice I gave the first book a 4.5/5 stars on Goodreads. Kagawa not only visually builds the Nevernever for you but also builds a vivid social/political structure as well. You really do escape to the reality of these books while you read, which is why I again may or may not have read them all in 5 days.

The plot development is absolutely perfect. The first book is slowed down a bit because it is setting up the world of Faery and all of the drama for the rest of the series, but it’s necessary and that’s why I was so captured by the series. The world was so complete. I would compare it to City of Bones in The Mortal Instruments series. It doesn’t REALLY get good until the second half, but then once it does, you are sucked in and you don’t want to resurface until it’s finished.

The romance builds gradually and beautifully and is paced well…no insta-love…no lusty, let’s hop into bed with each other stuff. There is the heart-wrenching love triangle, which though not quite a triangle as it is rather lopsided (sort of like The Mortal Instruments again), and many heartbreaking sacrifices. The series is full of unavoidable losses, epic quests, ah-mazing one-liners and loads of fun banter. There are even the philosophical questions of what it means to truly love, what it is to be “human,” the good of one/few versus the good of many. Everything about this series is carefully and systematically written to produce a gorgeous and fully satisfying series.

Kagawa’s characters are perhaps the most exquisite part of The Iron Fey. The hero of most of the series is Meghan Chase. She is beautiful, though quietly so, and she has a strength about her that at first is understated but grows throughout the books to something truly admirable. She is courageous and good. Meghan is loyal, sometimes to a fault, and will put another’s well-being first in nearly every situation. I could truly relate to Meghan and felt she was someone I could easily befriend. Honestly, I felt she could have used a good girl friend and perhaps that’s why I loved her so much because I felt we became friends through the course of the series. My heart broke for her, I cried for her, I laughed with her and since most of the series was from her perspective, I felt like I “got” her.

Puck, yes the Puck, was probably one of my favorite characters, especially after reading Summer Crossing. He is hilarious, loyal, and much deeper than he appears. He is every bit as much the reckless prankster you see in all his tales yet Kagawa makes him “human” and likeable and totally relateable.

Then there is Ash, youngest son of Mab the Unseelie Queen. The ice prince is just what he sounds like. He is aloof, cold, and incredibly swoon worthy. Ash is the type of guy I love in a story. Witty when he wants to be, takes a lot to get to know, has a level of mystery, but vulnerable–you know there is more to him than you see on the surface. You feel that there is something noble about him…more than the fact that his a prince. That he wants to be more than what he’s become. I love that we get to know him on a deeper level in The Iron Knight because it explains so much of who he is and why he does what he does.

The secondary characters are fantastic as well. Well-built and easy to accept as real and important. I adored Grimalkin probably more than anyone else in the story. He is an utterly hilarious fey cat who leads, guides, and directs the quest of the series. Grim is wise and at times manipulative but you get the feeling that there is more to him and his motives than he lets on. He pops in and out at the most hilarious and opportune moments. The funniest part of his character is just how cat-like he is. His answer for just about everything is, “I am a cat.” which made me laugh every single time.

As a note of warning, the series is heart-wrenching and at times almost infuriating. My husband came home one day in the middle of me reading and found me in my favorite reading spot practically sobbing over these books. Another time my six year old consoled me with a hug and “It’ll be ok, Mommy, I’m sure there’s a happy ending…it’s a book after all.”

Please, never read a tragedy kiddo!  😉  At times the series will make you cry, laugh, rage, and want to shake the characters.  It is a highly emotional experience, but that’s the measure of a good series, right?  When you feel what the characters feel.  When you ache for them.  I felt the usual sadness I always experience at the end of a truly well-done series.  The sorrow that it’s over.  However, I felt satisfied that the characters had lived out their stories.  It was complete and fulfilling.  =)  I look forward to more by Kagawa in the future.

I wish I could give the series 6 stars! 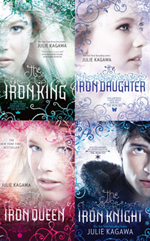