That day I knew for sure. I’d lost control of my tears then. They fell in huge, mocking drops. I stared at Joshua through those bitter tears, my heart missing beats as I tried to remember to breathe.

I finally knew what the glow meant.

I was a freak and Joshua was going to die.

Bryn Halbrook had always seen the glow. But it is only when her best friend dies that she discovers the meaning of those beautiful golden auras — Death. Alone, lost in the foster system, she struggles to understand who she is and why she was cursed with the ability to see the soon-to-be-dead.

The new foster kid, Aidan, isn’t helping any. Mr. Perfect seems to fit in no matter what, making her feel even more pathetic. But when his affections turn to her, Bryn finds him hard to resist. Impossible actually. A mystery himself, Aidan disappears, leaving behind a broken heart and a mysterious book that suggests Bryn might not be entirely human.

Bryn stands at the threshold of a journey of discovery. Will destiny help her find herself, find her purpose and her place in a world in which she’d never belonged?

Norse Mythology meets modern day. A girl who can foretell whom death will touch. A fleeting romance with an intriguing biker bad boy.  A destiny reborn. Piqued your interest yet? Well read on…

Bryn. When we meet Bryn, she’s a foster kid, having recently been relocated to the home of the kindly Ms. Custer. But she’s lonely, yearning for a real human connection, and perhaps that’s why things with Aiden develop so fast. She’s a little jaded and anti-social due to her semi-transient existence, but she tries her best to keep her nose clean and not draw undue attention to herself. However, she is quickly beginning to fall in love with her little foster family – Ms. Custer and a handful of younger children – which might possibly be the first truly stable home situation she’s been exposed to. Bryn starts out a strong character and fairly confident girl, but it’s interesting to watch her character progress throughout the novel as she begins to really own her heritage as one of the Valkyrie.

Romance. To be honest, the romance between Bryn & Aiden fell a little flat for me. Though Dead Radiance is not billed as a young adult paranormal romance, this book does have quite a bit of romance or thoughts of romance.  I think with a bit more emphasis on the foundational development of their relationship, I could have gotten behind their feelings. However in the end, I just don’t understand why Bryn cares so much about Aiden, as there isn’t a whole lot of substance on which to base their almost-relationship. They just seemed to lack the necessary on-page chemistry that makes a romance believable to me. That’s not to say that Ayer can’t write chemistry, she can… I just didn’t feel a genuine connection between Bryn & Aiden. So, who am I shipping in the world of the Valkyrie? Brynrir.  Bryn + Fenrir. They had some chemistry going on, and I felt that, eventually, maybe it could become something more. He’d make a fantastic match for Bryn. They just seemed to connect on a deeper level, and considering who he is and who she is and mix in a fatal prophesy… a romance between Bryn & Fenrir could be truly epic. But alas, as I said, though they had chemistry, it never really entered the realm of the romantic. Nevertheless, I have my fingers crossed, Ms. Ayer. I have my fingers crossed.

Story. Dead Radiance is a novel jam-packed full of story, and one that basically can be separated quite clearly into three acts – origins, self-realization, and quest – which is, I suppose, somewhat in line with the format of most heroic mythology. The plot is constantly and quickly moving forward, and holds some interesting, original elements. However, the quickness and thickness of the plot sacrifices some necessary relationship development. In addition to that, for some reason I also had a hard time keeping track of the book’s time line. It read as a little convoluted once in awhile, and it was a little difficult to tell just how much time passed between some events. However, despite those issues, it is an enjoyable story.

Mythology. The Norse mythology that Ayer winds in and throughout Dead Radiance and the little tweaks she adds to it are quite fascinating and well-done. I must admit, other than a smattering of Norse gods and of course Chris Hemsworth’s hunk-… <ahem>… I mean, fantastic reincarnation of Thor, I’m not extremely familiar with Norse mythology. (Is it sad that most of my exposure to Norse mythology is due to a Marvel comic… and possibly, but less accurately, Stargate SG-1? Dont… don’t answer that.) However, this book, drove me to Wikipedia to expand my paltry amount of knowledge, and I love when books interest me enough to research the background behind it. I particularly enjoyed Ayer’s characterization of some of the gods of legend. In my opinion, though I’ve just admitted how ill-informed it may be, she nailed her portrayal of the gods and goddesses perfectly. In regards with what’s to come, I’m very curious as to how Ayer will deal with some of the situations she’s created in her story and how they will play into some of the more well-known mythological events that are destined to occur. 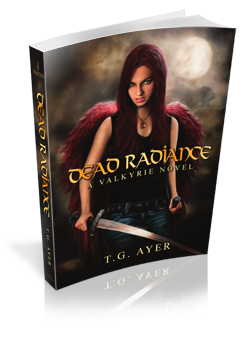 A little bit about Tee…

I have been a writer from the time I was old enough to recognise that reading was a doorway into my imagination. Poetry was my first foray into the art of the written word. Books were my best friends, my escape, my haven. I am essentially a recluse but this part of my personality is impossible to practise given I have two teenage daughters, who are actually my friends, my tea-makers, my confidantes… I am blessed with a husband who has left me for golf. It’s a fair trade as I have left him for writing. We are both passionate supporters of each others loves – it works wonderfully…

My heart is currently broken in two. One half resides in South Africa where my old roots still remain, and my heart still longs for the endless beaches and the smell of moist soil after a summer downpour. My love for Ma Afrika will never fade. The other half of me has been transplanted to the Land of the Long White Cloud. The land of the Taniwha, beautiful Maraes, and volcanoes. The land of green, pure beauty that truly inspires. And because I am so torn between these two lands – I shall forever remain crosseyed.[/box]

Today, I’m giving away ONE (1) Kindle ebook of Dead Radiance to ONE (1) lucky follower!