As the apparent hauntings become more intense, Heath begins to fear for his safety. With the help of his friend Josie, Heath discovers an unsettling secret that ties the mysterious girl to both their families. When two of their friends die unexpectedly, Josie and Heath realize that something, or someone, is after the children of those who wronged Catherine, and they are next.[/box]

Set in a small, Oregonian seaside town, The Weeping is a story of the sins of generations past and vengeance from beyond the grave. Twenty years ago, a devastating fire ravaged the Rock Harbor Opera House, claiming the life an unfortunate teenage girl. Since that time, the theatre has been plagued by rumors of a restless spirit, bad luck and a slew of unsuccessful attempts to revive the small town’s once-glorious cultural center. Heath’s uncle Vic purchases the unlucky and rundown theatre, restoring it to its former glory. When Heath arrives in town, chased there by his own personal demons, Vic’s company is almost a week away from their very first opening night. Tasked with helping his uncle prepare for the show, Heath begins to work odd jobs backstage. Try as he might he cannot shake a growing sense of unease or ignore the fact that he’s been having bizarre, frightening experiences since entering the theatre. Not to mention the disturbing half-charred girl that haunts him in his dreams. As the experiences intensify and the mystery slowly begins to unravel, he wonders if his terrifying visions are real or a consequence of his own messed up head and unresolved guilt.

Heath is a character I connected with instantly. Overwhelmed with grief at having inadvertently killed three of his closest friends, Heath is a broken version of his former self. The stereotypical, arrogant high school jock, Heath was once confident, talented, ambitious, and a bit of a player. In the aftermath of his accident however, he’s withdrawn, damaged both physically and mentally, and convinced that no one can fully comprehend his pain. One failed suicide attempt later, Heath’s parents decide to ship him off to his dad’s hometown for the summer. The unfamiliar atmosphere – the fresh start in a place unsullied by the memories or implications of his accident – may be just what Heath needs to start over. If he can survive the skeletons of his family’s past, that is. The characterization of Heath is just fantastic, and Hutchison does a wonderful job at developing his protagonist whilst moving the overall plot forward at a fast, gripping pace.

The other characters in The Weeping are no less compelling. Hutchison has taken the time to properly develop his secondary characters, giving them uniqueness and their own individual voices — something which shouldn’t be a rarity, but that unfortunately oftentimes tends to be. I won’t go into much more detail beyond this, but I will say that Hutchison extends some of his cast beyond the character molds typically found in YA fiction, and I loved the originality.

As you are most likely aware by now, the majority of this book is set against the backdrop of the theatre. In addition to writing and blogging, Hutchison has himself been actively involved in the world of the theatre, and his love of the boards and greasepaint is evident throughout this novel. They – the ubiquitous they – always say to write what you know, and from his vivid depictions of life in the theatre, it’s clear that it is truly a passion of this author.

Creepiness factor. This book has some truly creepy moments. I don’t have a high threshold for horror. I’m the kind of person who slams a throw pillow over my eyes at the first sign of a horror preview during a commercial break, all the while begging my husband to fast forward past the freaky, half-rotten, melancholy girl with disturbingly dead eyes singing “The Itsy Bitsy Spider.” (Seriously!?) However, I’ve found that I do a lot better reading creepiness, than I do watching it.  The horror and suspense throughout The Weeping is built up extremely well both “visually” and emotionally, masterfully conveying that spine-tingling sense that something is very, very wrong and then unleashing the heart-stopping fear that Heath is faced with both in both his dreams and in his waking moments. I began this book at night… and had to stop reading to finish in bright, sunshine-filled light of day. (Seriously.) Goodness only knows if I’ll be sleeping with the light on tonight, but it’s a very good possibility. If I do get up the nerve to flip the switch off, I reserve the right to hide my head under the covers. I told you…. low tolerance for scary things, and the things that happen in the Rock Harbor Opera House are certainly scary.  Don’t judge, don’t judge.

Overall, with an wonderfully empathetic male protagonist and an original and creeptastically suspenseful plot, The Weeping debuts as an extremely well-crafted young adult horror novel. 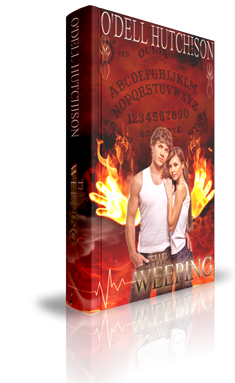 O’Dell Hutchison was born in a small rural town in Idaho. There wasn’t a lot to do in a town of 150 people, so he entertained himself by writing stories, plays and musicals. After high school he attended college in the Pacific northwest, where he got his first taste of a real writing class and he was hooked. After college, he found his way to the Houston area. When the first student loan payment came in the mail, he realized he may need to look for a real job to pay the bills and writing became an occasional hobby. Ten years later, he sat down and started writing again. It took a while to brush off the cobwebs and get back into the groove, but through the help of friends, writing buddies and friends in the blogging community, he finally found his mojo again.

Today, I giving away ONE (1) signed, hardcover of The Weeping to ONE (1) lucky US/CAN follower!