Why be the sheep, when you can be the wolf?

Seventeen-year-old Ismae escapes from the brutality of an arranged marriage into the sanctuary of the convent of St. Mortain, where the sisters still serve the gods of old. Here she learns that the god of Death Himself has blessed her with dangerous gifts—and a violent destiny. If she chooses to stay at the convent, she will be trained as an assassin and serve as a handmaiden to Death. To claim her new life, she must destroy the lives of others.

Ismae’s most important assignment takes her straight into the high court of Brittany—where she finds herself woefully under prepared—not only for the deadly games of intrigue and treason, but for the impossible choices she must make. For how can she deliver Death’s vengeance upon a target who, against her will, has stolen her heart?

1488. Duke Francis II of Brittany has died, leaving his twelve-year-old daughter and heir in the midst of a military and political nightmare. The Bretons, trying to maintain autonomy against the French, are desperate to crown their duchess before the French can further interfere. While France ruthlessly pursues control of the duchy, Anne must  also fend off a host of unsuitable Breton nobles and European royals who have been promised her hand in marriage. Not only is she facing attacks both foreign and domestic, but it soon becomes clear that there is a traitor hidden amongst her Privy Council – those who serve as both guardians and advisers. Anne’s situation, Brittany’s situation, is growing more desperate by the day, and the number of people she can trust is dwindling fast.

Seventeen-year-old Ismae Rienne is mercifully snatched from a life of misery and abuse and finds herself with the chance to begin again with a life of service and purpose at the convent of St. Mortmain. As a daughter of Death Himself, she is trained as an assassin ready to dispense Mortmain’s justice where He wills and to serve the interests of Brittany. When it becomes clear that the duchess is being threatened from within, Ismae is sent to the Breton court to aid the handsome Lord Gavriel Duval in revealing the traitor. But in an atmosphere of secrets, lies and betrayals, who can she truly trust? Can she even trust her heart?

In a word, this story is captivating. From the gorgeous and beautifully crafted prose, to the wonderfully antiquated yet modern dialogue, to the descriptions of court decadence, to the level of historical accuracy merged with myth, to the pacing, to the fantastic character and relationship development. Everything about this novel just hits the mark.

Ismae Rienne. I found Ismae to be pleasantly surprising. A teenage girl assassin?  Awesome.  However to be honest, I was fearing a character that might be a tad heartless, jaded and singly-focused on duty. Her abusive experiences at the hands of men throughout her childhood could have easily left her hateful, calloused and broken. Instead, Ismae refuses to be defeated by the trauma of her past.  When she’s offered the chance to serve with the sisters of St. Mortmain, she moves forward eager to learn that which will give her an edge in the world of men. She finds a pride in a heritage she once found shameful, and a purpose she has chosen instead of a husband she did not. Though she’s wary of men in general – and she has every reason to be – Ismae is not what I’d consider to be a man-hater. I actually found her to be more fair-minded than I had anticipated – judging an individual more by their actions than by what they are. She’s a very astute judge of character, intelligent, discerning, empathetic, loyal, ready to take action but not impulsive. Though she loves her god and her sisters, she questions the rightness of what she does at times, which leads to a lot of good internal conflict.

Lord Gavriel Duval. I’m not going to say much about his character and attributes, but that he’s everything I wished him to be. Not vague at all, eh? He is both a great match and a great foil for Ismae, as she must view him as both her closest ally and potential enemy. Both Ismae and Duval have a fantastic chemistry that slowly builds page by page, and their interactions stand as some of my favorite moments in the book.

Anne of Brittany. Anne is an actual historical figure which, I’m sure, made her both easy and difficult to portray. I don’t know much more than the highlights of Anne’s life, but I believe that LaFevers has created a lovely representation of her in Grave Mercy. Only twelve, Anne displays an authority, a presence of mind, a maturity and an intelligence that both supersedes and befits both a girl of her upbringing, station and background. Children of the 15th century, especially ones with duties and obligations such as Anne, did not have the luxury of a long childhood, if they had one at all. And so, I found her very grown up portrayal to be believable, if not a little heartbreaking.

The setting of Grave Mercy is one of the things that initially appealed to me. It’s essentially a novel about the Breton struggle to maintain their independence as the French relentlessly pursue control of Brittany. This novel has such a sense of historical richness and authenticity. For those of you who might be apprehensive about the historical aspect of this book, don’t worry. It’s not a book that’s weighed down by long explanations of historical context and background. In addition, LaFevers mixes the historical drama with an interesting mythology of the nine gods of Breton that pushes the story into the realm of the fantastic. From what I’ve been able to gather, LaFevers has created her own Breton lore by taking the leftover remains of Roman paganism and merging it with a little bit of Catholicism and some of the druidic history behind the Isle de Sein. It’s absolutely fascinating, and though the book is largely rooted in historical event, it reads almost like a fantasy novel. 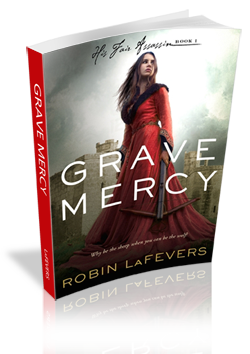 Source: ARC provided by both Around the World Tours & NetGalley